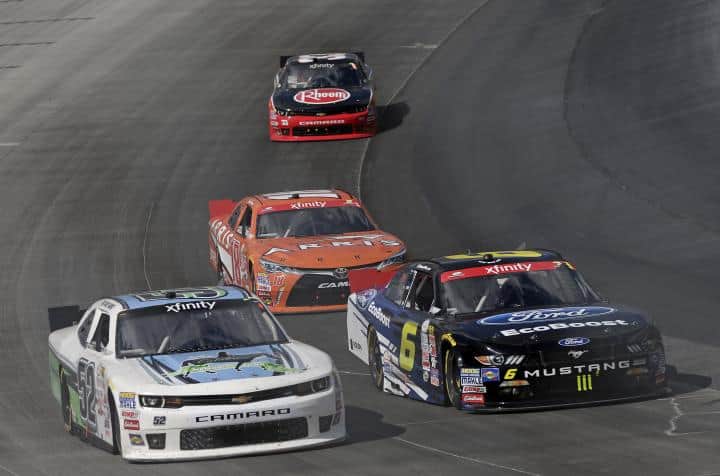 With the points battle tightening, a high-speed weekend on the Monster Mile may make or break a team’s NASCAR Xfinity Series championship hopes.

Testing an interesting new concept, Obaika Racing announced that Ryan Ellis will compete in the team’s No. 97 Chevrolet with support from Vroom Brands after Ellis won a fan vote for the ride. Ellis, who was originally scheduled to drive the No. 17 Ford for Rick Ware Racing, is expected to compete for the full 200-mile distance.

With the NXS running companion races with the NASCAR Sprint Cup Series for the remainder of the 2015 schedules, fans can expect a healthy amount of Cup stars each week. Kyle Busch, Denny Hamlin, Austin Dillon, JJ Yeley and Kyle Larson will all compete in Saturday’s race as they try to tune up for the final race of the Chase for the Sprint Cup’s opening round.

The NASCAR Xfinity Series will return to action in Dover, Delaware on Friday, Oct. 2 for a lone practice session at 1:30 p.m. The field will then return on Saturday for Coors Light Pole Qualifying at 12:15 p.m. ET. Coverage of the Hisense 200 will begin at 3:30 p.m. ET on NBCSN and MRN.

As usual with companion events, Gibbs has Kyle Busch entered, and this week, he’s got Dennis-the-menace Hamlin entered. I’m surprized he doesn’t have Kenseth or Edwards entered to give them extra practice.

My daughter lives about ten miles from the Dover track. She told me last year that there was some supermarket promotion and they weren’t even able to give the Xfinity tickets away. It’s a mess isn’t it?

Kyle could have a tough time keeping Morgan Shepherd behind him.