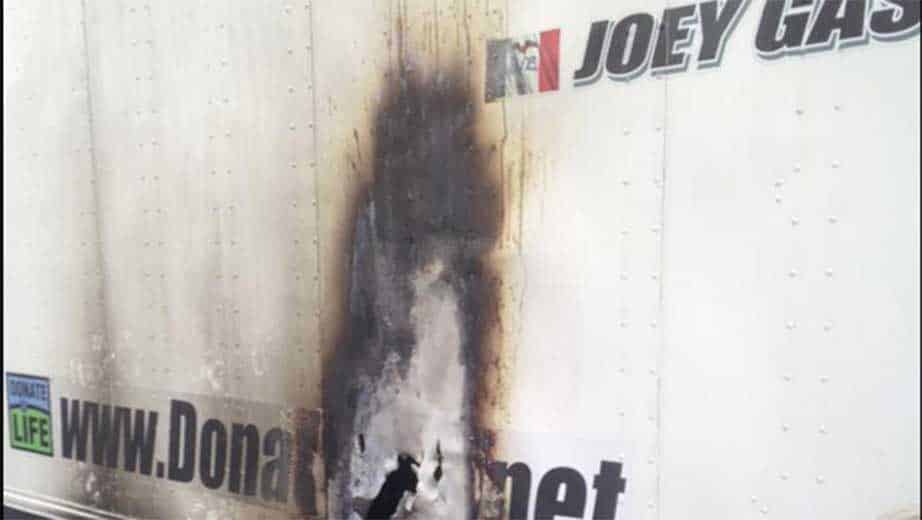 The incident, shared on the team’s Facebook page, burned a hole through the hauler.

A crew member was injured in the incident while trying to help firefighters, the team confirmed in a post on Facebook.

The team posted the following summary, along with a video surveying the damage to the team’s hauler: “Unfortunately our trip back home didn’t go as well as the race did for us last weekend. The teams transporter caught on fire about 80 miles from the shop & is completely ruined. Everything on our pit box (computers, seats, etc.) are all destroyed as well. We haven’t been able to get the cars down yet (one we are hoping to use this weekend in Dover) but we are hoping for just smoke damage.”

The team later updated their page, posting pictures of the car and confirming that they intend to race this weekend.

“Took some redneck engineering but the team was able to get the cars out of the hauler. As far as we can see we will be able to use the same car for this weekend that we used in Kentucky. It will take A LOT of cleaning inside and out. Joey will also have to hold his breath for a few laps till it gets aired out a little bit,” the post reads.

Gase and JMR have made the most of limited resource in 2015, posting only four DNFs in 27 races and finishing as high as fifth at Talladega Superspeedway. Gase currently sits 21st in the series standings after a 21st-place performance in Kentucky.