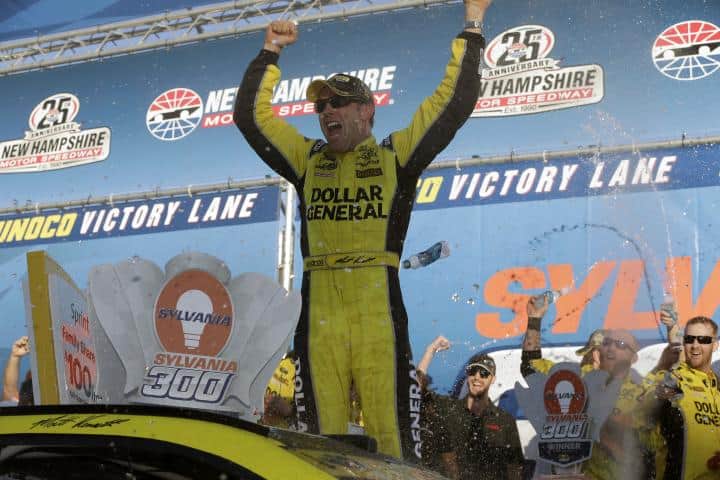 It was a wild and controversial Sylvania 300 at New Hampshire Motor Speedway on Sunday. It came down to fuel strategy as Kevin Harvick‘s No. 4 Chevrolet was out in front of the field in the closing stages. Harvick and had a miscommunication and stayed out when the final caution fell on lap 237 after Justin Allgaier hit the outside wall. That made for interesting strategy, as many of the top running cars pitted leaving just few drivers out as the race restarted on lap 242.

According to the NBCSN broadcast, Harvick’s crew chief Rodney Childers was watching a monitor on delay and called Harvick to the pits after Harvick had already passed the commit line. That meant Harvick restarted in the third position.

Meanwhile, that left Biffle with the lead, and a few laps later Harvick passed Biffle for the lead. Biffle lost second and third position to Denny Hamlin and Matt Kenseth. Kenseth then passed teammate Hamlin and closed in on Harvick in the closing laps. Harvick was in front, as he had been for most of the day, until lap 296 when Harvick ran out of gas on the backstretch allowing Kenseth to take the lead.

Kenseth would set sail on the field and take the checkered flag in the Sylvania 300 and advance to round two of the Chase for the NASCAR Sprint Cup. It’s Kenseth’s 36th career victory. An unusually excited Kenseth was in victory lane.

“I thought he was gonna beat us, he had a better car today but I guess he was a little short on fuel,” Kenseth told NBC’s Mike Massaro. “This is unbelievable, feels unbelievable.”

Harvick wasn’t the only one to have fuel issues in the closing stages. Teammate Kurt Busch and Dale Earnhardt Jr. both had to pit after running out of fuel late in the going. Earnhardt finished 25th while Busch finished 19th.

Keselowski, meanwhile, worked his way up to the 12th position after the penalty. Keselowski commented on the situation. “It’s a pretty basic understanding,” he said to Dave Burns. “It’s an entertainment sport, not a fair sport.”

Kenseth’s win allows him to advance to Round two of the Chase to the NASCAR Sprint Cup. He and teammate Hamlin are the only drivers to lock their way into the second round.

The race had nine caution flags for 41 laps, including a caution on lap 205 that saw Danica Patrick hit the outside wall hard after contact with Newman. Patrick’s car slid up to the outside wall and came back down in front of traffic, causing David Ragan to hit her and putting the race under a short red flag due to the debris from the accident.

The next race on the NASCAR Sprint Cup Series schedule is the AAA 400 at Dover International Speedway on October 4.