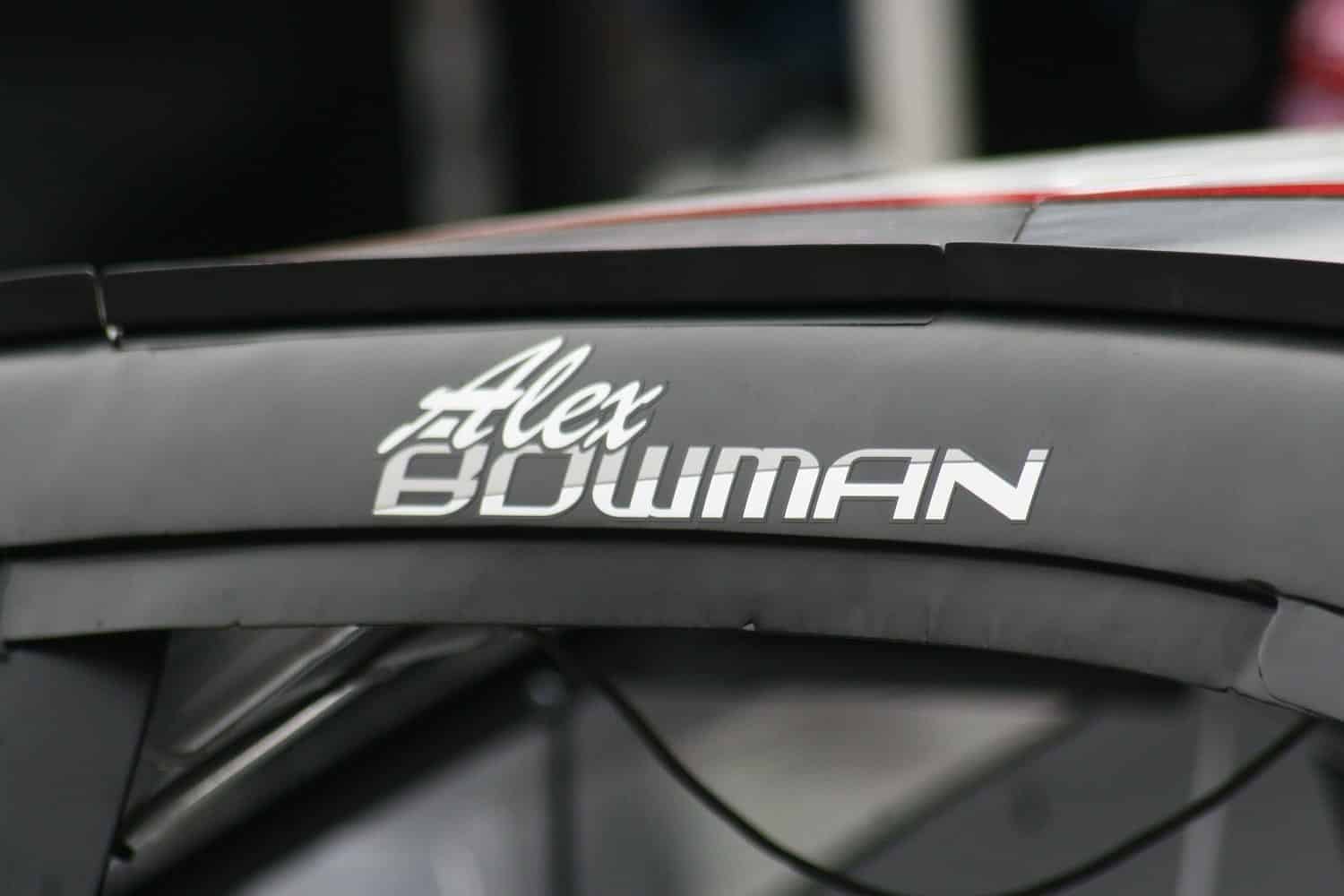 While scrolling through your Twitter feed, you might catch the eye of a few young racers. Alex Bowman, driver of the No. 7 Chevrolet for Tommy Baldwin Racing, is one of the many young men that have increased their presence in the world of social media.

The easy-going Bowman can be seen smiling throughout the NASCAR Sprint Cup Series garage on any given weekend. His contagious laugh and his unbelievable collection of sports cars has made him quite the catch for sponsors, bringing in several new companies to the small TBR organization in 2015.

After failing to qualify for the season-opener at Daytona, Bowman has an average finish of 31.5 this year, increasing slightly over one position from his rookie campaign with BK Racing in 2014. In an exclusive interview with Frontstretch, Bowman discusses his season with the small team, his growth as a driver, his contract extension and more.

Joseph Wolkin, Frontstretch: How would you evaluate the team’s season?

Alex Bowman: It’s had its ups and downs, but we’ve had a lot of bad luck. Some of our best races that we’ve had going, we’ve had bad luck. It is what it is. These last couple of weeks have probably been the roughest point.

Wolkin: You had two straight finishes outside of the top 40 earlier this summer. How do you rebound from that?

Bowman: Well, they weren’t really of our own doing. At New Hampshire, we blew a right-front tire and ended up catching on fire and burning the whole right side of the car off. [At Indianapolis], we blew a motor. It’s not like we ran 43rd. We were running up inside of the top 30 and had failures. That’s just a part of racing. It’s unfortunate that it happened to us, especially two weeks in a row.

Wolkin: What have you learned since your rookie year that has helped you?

Bowman: Really just kind of what I need in a racecar. Last year was my first year driving a Cup car, so I was just learning about the Cup cars and how they race. This year is a little different with less horsepower and a different spoiler. I’m learning more of what the racecar needs to be faster in a race.

Wolkin: How different is the handling on the car this year with the new aero package compared to last season?

Bowman: This year, you’re faster through the center of the corner. You have less spoiler and less horsepower and they tend to turn better. They drive a little bit more like an Xfinity car.

Wolkin: What has the transition to Tommy Baldwin Racing been like for you?

Bowman: It’s gone really well. I really enjoy working with everybody here. They’re all racers, which is fun to work with a bunch of people because they enjoy it. It’s just fun to be around.

Wolkin: This season, you’ve had a few races with a blank racecar. How does that change how the team does things on a weekly basis?

Bowman: We’re always trying to sell sponsorship, especially for the races that are not funded. Tommy puts a lot into this race team. If there is nobody on the hood, it is definitely coming out of his pocket. At the same time, he doesn’t hold us back any. He gives us what we need and does a really good job at knowing exactly what we need to be competitive at the racetrack.

Wolkin: How many races do you have funded?

Bowman: I don’t know the exact number. I think we’ve only not had a sponsor on the hood two to three times [actual number is three prior to interview with the fourth being at Watkins Glen]. We have had great partners with Toy State, Nikko and everyone else that has been with us this year. It’s been fun to represent some really cool brands and I’m just enjoying it.

Bowman: The coolest that we’ve done is the Go Baby Go events with Toy State. Basically, we take kids that don’t have all of their motor functions and were born with different disabilities, and we build them a little toy car. We modify them so the kids with disabilities can use them. If they can’t use their legs, they have a button for their gas pedals and brakes.

If they can’t hold themselves up, we put a roll cage in them and we’ll hold them up. It’s really cool because it helps them with their therapy at the same time. They start moving around and feeling more normal. They are kind of the cool kid in the neighborhood because they have a toy racecar.

Wolkin: With bringing in these new sponsors, how do you position yourself to be more marketable compared to other drivers?

Bowman: You run up front, say the right things and look good on TV. The biggest thing is saying the right things and having the right personality. Everyone wants a driver that comes off great on TV, and you have to watch what you say. I’m probably on the edge of that. Sometimes I say things that I shouldn’t, but I never try to make myself exactly what a sponsor wants. I’ve been fortunate enough that the partners we’ve had I think are happy with me. Everything we do with them, I think they’re pretty happy with.

Wolkin: What do you need to improve on heading into the latter half of the year?

Bowman: Somebody needs to find a golden horseshoe or a three-leaved clover. We need some luck more than anything. We’ve been strong and had some stuff break that shouldn’t break. I think we just need to turn that around a little bit. A lot of that comes with having funding and having time at the shop so you can be extra prepared and go over that extra little bit. My guys do an awesome job for what we have to work with. We typically outrun the cars that we have the same funding range with. We race with cars that have a lot more to work with than we do. I think that is the most enjoyable thing – to see the smiles on the guys’ faces doing what we do with what we have.

Wolkin: How has it been to have Tommy as your crew chief after having “Bono” earlier this year?

Bowman: It’s a little different, but I think they both come from the same background. They are best friends, and it’s not like Tommy wasn’t a crew chief before. It’s a little bit of a different strategy when we come to the racetrack, but it’s working out really well.

Wolkin: How does his experience help you, especially since he was with some larger teams and won five races?

Bowman: It helps, but at the same time, everything is so different from what they did then, last year and the year before that and even last week. This garage has changed a lot in a short period of time. A setup is a setup. We’re just trying to work with different things, different aero balances and different levels of grip in different places. We tried some science experiments that he has come up with. Some have worked and some haven’t. His experience always definitely helps.

Wolkin: How difficult has it been for you guys to adjust to the different aero packages this year?

Bowman: It’s a little harder for us than a team like Hendrick Motorsports. We don’t have a teammate to try two different things when we unload. At the same time, it is part of the sport and you have to remember that everybody is facing the same things. You just have to deal with it.

Wolkin: What would you like to see changed for 2016?

Bowman: I’m more of an open-wheel racer, like a sprint car racer, so I’m in favor of no downforce and lots of horsepower. I’d love to take the spoilers off of them, give them all of the power back, take all of the aero off of them, make a really sticky tire that goes away really fast. But that’s easier said than done.

Wolkin: You recently picked up your option for next year with the team. How important is it to have a secure ride for the first time in your career?

Bowman: It means a lot knowing where I’m going to be next year. When we get to the end of the year, even if we are struggling, it’s not like we are just trying to get through since we’ll still be trying to get better for next year. It’s really good to have that security and I’m glad to be a part of TBR.

Wolkin: What do you expect the team to improve on next year?

Bowman: I think it is going to be a little bit of everything. Hopefully, we will be able to find some more partners to bring in and get some more money. Beyond that, I think just having more time together, we’re just going to keep getting better.

Wolkin: Earlier this year, there was a rumor that your team would be merging with BK Racing. What happened with that deal?

Bowman: We’re going to stay by ourselves, which I think is the best thing we can do. Everybody at TBR works really well together. At times, it might be better to have a second car I feel, but four cars would be like the opposite of Hendrick Motorsports. I think we just need to keep getting better on our own. Maybe at some point, Tommy will want to run a second car. I know they did last year, and if we got the funding and got the people together, that would help us. I’m just glad we’re sticking with what we have.