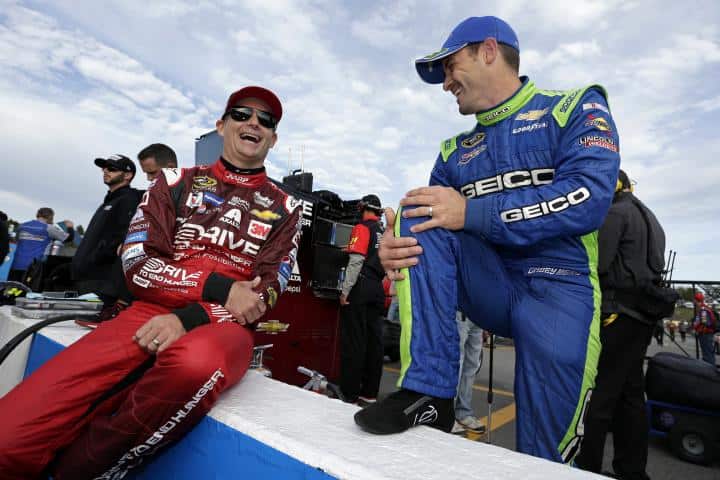 ONE: Can Harvick recover?

For the longest time on Sunday it looked as if Kevin Harvick was going to wheel his Ditech Chevrolet right to Victory Lane and straight into the next round of the Chase. That was until disaster struck with three laps to go, when his car sputtered and ran out of gas. Harvick ended up finishing 21st (and let’s be fair; it could have been worse) but he has an absolute mountain to climb to make the next round.

Realistically speaking only a win will do, and that’s not ideal at a track where Harvick has just four top-five finishes (and 13 top-10 runs) in 29 previous appearances. The one glimmer of hope, perhaps, is that he led 91 laps and finished second in the previous race at Dover this spring. He’ll need more of the same (at the very least) and other contenders to have terrible days. It’s not out of the question, but you wouldn’t bet your mortgage on it, that’s for sure. All season long folks have been predicting the title has to go through Harvick. Now, it might already be all over. He’ll be one to watch this weekend. Expect fireworks one way or the other.

Sunday’s seventh-place finish was Jeff Gordon’s remarkable 468th top-10 of his 789-race, 24-year career. For those mathematically inclined, that means Gordon has picked up a top-10 in just under 60% of the Cup races he’s run – a staggering statistic all told. But Sunday wasn’t so much about the top 10 and remaining in contention for a fifth championship as much as it was the race where Gordon set the record for most consecutive races run, beating Ricky Rudd’s 788-race mark. Just for the record the next two drivers on the list are Bobby Labonte (704 races) and the inimitable Rusty Wallace (697 starts). By the time Gordon hangs up his driving boots, he will end up with a final record of 797 consecutive races: a mark that might not ever be beaten.

“I remember when Ricky Rudd did that and Terry Labonte and other guys that had these incredible records and streaks,” said Gordon in an interview with FOX Sports on Sunday. “I thought, ‘Man, they are old. I will never be around long enough to set that record or achieve that.’ Now here I am. Yeah, I’m old, too, but now I appreciate what those guys did and the effort they put into it and the commitment.” Of course the real question is how will Gordon finish out his final season? A championship seems to be a stretch but given the topsy-turvy nature of the playoffs thus far you never know.

On Wednesday afternoon at a Stewart-Haas Racing press conference, we should get the official confirmation that next season, 2016, will be the 18th and final season of Tony Stewart’s long and illustrious first-ballot Hall of Fame career. (Side note: why do we always know the subject matter of NASCAR press conferences so far ahead of time? A little mystery here and there would be great, huh?) Word is that Clint Bowyer will take over driving duties in the  No. 14 car starting in 2017 after spending a sabbatical year of sorts in the No. 51 car of HScott Motorsports. Stewart is the only driver with a Winston Cup, Nextel Cup and a Sprint Cup title – a record that will now never be equaled, and his total of 48 wins (and counting) is good enough for 13th position on the all-time wins list. Clearly these past few years have been extremely difficult for Stewart, so in some senses it’s not a great surprise that he’s calling time on his stock car career. It has been 69 races since Smoke last visited Victory Lane (at Dover International Speedway in June, 2013); fingers crossed that there are a couple wins left in the tank, as 50 victories would be a nice round number to finish up his career. Wins aside, the sport will be a little blander without Smoke, though, no question. Here’s hoping he can finish out his career with a strong final season and one last crack at a championship.

Next up, the Sprint Cup circus heads to the Monster Mile – Dover International Speedway – for the second of two events this year at the venue and the 29th race of the 36-race schedule in 2015. Sunday afternoon’s tilt will be the 92nd Cup race held at the 1-mile high-banked concrete track; a streak that runs all the way back to 1969 when none other than Richard Petty won the inaugural race. Jimmie Johnson won the first race of the season at Dover: a record busting 10th victory at the track and the 74th (and most recent) of his career. Given Johnson has won three out of the last four at Dover, it’s hard to look away from the six-time champion as this week’s most likely winner.

But as we saw this past Sunday at New Hampshire Motor Speedway, and indeed again at Chicagoland Speedway the week before, the dominant driver at both events hasn’t won. Perhaps that will be a theme of the 2015 Chase? Regardless, Dover is a track where disaster lurks around every corner and for those drivers on the bubble of elimination this race is fraught with peril. Should be a fun one to watch. Love it or hate it, the Chase is off to a dramatic start.

And finally, although it all means precious little, I took a look at how the “traditional” points system would stack up right now without the Chase and it makes interesting reading. Leading the way is Joey Logano (1,028 points) with Harvick a smidge behind (-22). Dale Earnhardt Jr. would be in third place, some 83 markers back, with Brad Keselowski close on his heels 86 points behind Logano. In fifth place is Johnson, a whopping 105 points in arrears. Matt Kenseth is in sixth (-117 points) and the first Joe Gibbs Racing driver. So had we still been running the old system, the title would likely be a battle between Logano and Harvick. Given their past, that would have been a really compelling battle for the title