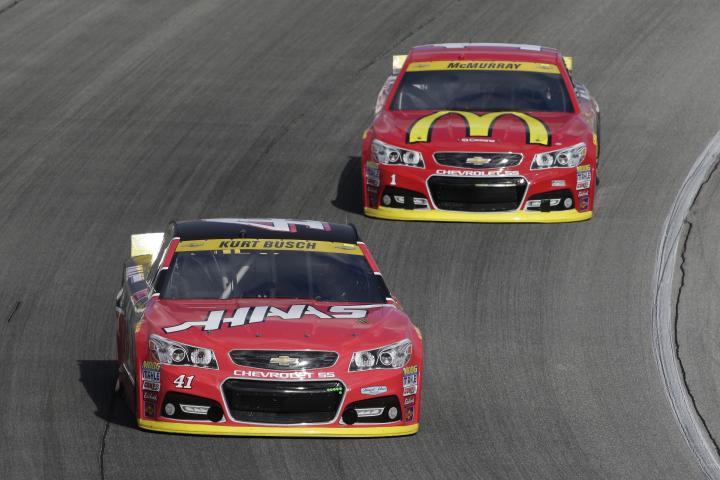 It’s been one of those weeks. and while I firmly believe there are positives in the sport in the form of good people and great stories to be told, there are some things that just make me want to gnash my teeth and groan. Here are a few of the things that really drive me crazy… and believe me, I don’t need a lot of help with crazy.

I know it’s Chase time, and even if I’d blissfully managed to forget about that before the race, NBC made sure to remind everyone during the broadcast. And by remind, I mean shove it down our throats at every possible opportunity. Sure, the championship is an important part of the sport, but in order to get to it, we still have races. Races that have 27 other drivers in them, and sometimes one of those guys actually even does something worth mentioning. I know that comes as a shock to some people, but the race is still about the competition among the 43 participants. Points as they run is the worst talking point ever. “If the race ended now…” Except unless a huge anvil falls from the sky onto the racing surface leaving a huge anvil-shaped hole in the racing surface, or for those less prone to drama it at least rains and rains for hours, it isn’t going to end now. The complexion of a race can change in an instant, as we were reminded on Sunday. The key is to talk about the Chase in the context of the race… and not put the whole race into the context of the Chase.

I don’t have an issue with NASCAR applying the restart rules at Loudon on Sunday. I do, however, have one with the failure to apply them at both Richmond and Chicago, and then randomly deciding that they count this week. Will they count at Dover? Maybe, I guess? That’s just not right. Yeah, I know that expecting NASCAR to be consistent with rules is about as fruitful as expecting pigs to sprout wings. But it would be nice to see teams penalized equally for the same infractions just sometimes instead of this, ‘you guys better fix this and go back through inspection or we’ll have to send you a harshly-worded letter’ or ‘we already told that team to reinspect for this same violation which may or may not even BE a violation, so we’re going to dock you a bunch of points and suspend your crew chief for a month and a half. Better luck next time!’ approach we’ve seen in recent years. It doesn’t work and it doesn’t fool anyone. Teams are asking for consistency and clarity because there isn’t much to begin with. Fans have stopped asking because they’re busy asking Santa for a unicorn instead, figuring they’ll have better luck.

3. Whatever happened to just cheering for your guy?

Is is just me, or is there a faction of fans that are either particularly large or particularly loud who seem to spend more time disparaging drivers they don’t like than supporting the ones they do? I mean, all fans have that one driver who gets on your nerves… that’s to be expected, but why put so much energy into the vitriol? And why be rude to other fans who like a different driver? There was a day when fans in the stands shared favorite drivers and stories and camaraderie. Now, if a fan tells the person next to them that they like a different driver, a putdown of some kind is often sure to follow. It also used to be that there were a few drivers that everyone seemed to like. Guys like Ward Burton or Ken Schrader who, while they might not have been most fans’ main driver, everyone sort of pulled for. Now, take a nice guy in a mid-pack car and people wonder why he’s even out there, or sneer at his efforts. It’s not a nice change, frankly. I love to see fans supporting their favorite drivers. But watching people constantly put others down instead seems like such a waste of time and energy. Why do that?

4. Change simply for the sake of change.

I just don’t understand this. “The sport is changing, we have to keep up with the times.” Since when does keeping up with the times involve rampant change for no particular or necessary reason? Sports do evolve, but they’re more successful when they do it on their own. Think football here, though comparing NASCAR to football is a bad idea. A really bad idea. But the game itself, and its playoff structure, have remained fairly constant. There have been small tweaks to keep up with technology, think the equivalent of NASCAR switching to fuel injection. If it was up to me, there would be no wild cards, which could be done away with with realignment, but that’s a whole other deal. But the game has changed on its own. The wishbone formation is outdated, so teams do something different. The NFL didn’t have to do away with it. NASCAR doesn’t need to make these big changes we’ve seen over the last decade. It needs to let the teams work and let things change on their own. We never needed a Chase, or contrived cautions, or tight gear and suspension rules. We needed cars that could race and emphasize on winning, all season long, along with a solid points system. That’s all. Both the Xfinity and Truck series do just fine with no Chase in terms of solid championship battles.

Because determining a champion in a single race with little bearing on what he did for the rest of the year seems like such a good idea on paper… or something. It’s a shame that the best overall driver of 2015 will most likely not have the opportunity to defend his title, while three drivers with zero wins and fewer top-five finishes combined than he has are in position to make the cut. What about that says champion to anyone? What says it to me is earned the most points this year by racing every week. But maybe that’s just me…

9 thoughts on “The Frontstretch 5: NASCAR Annoyances”