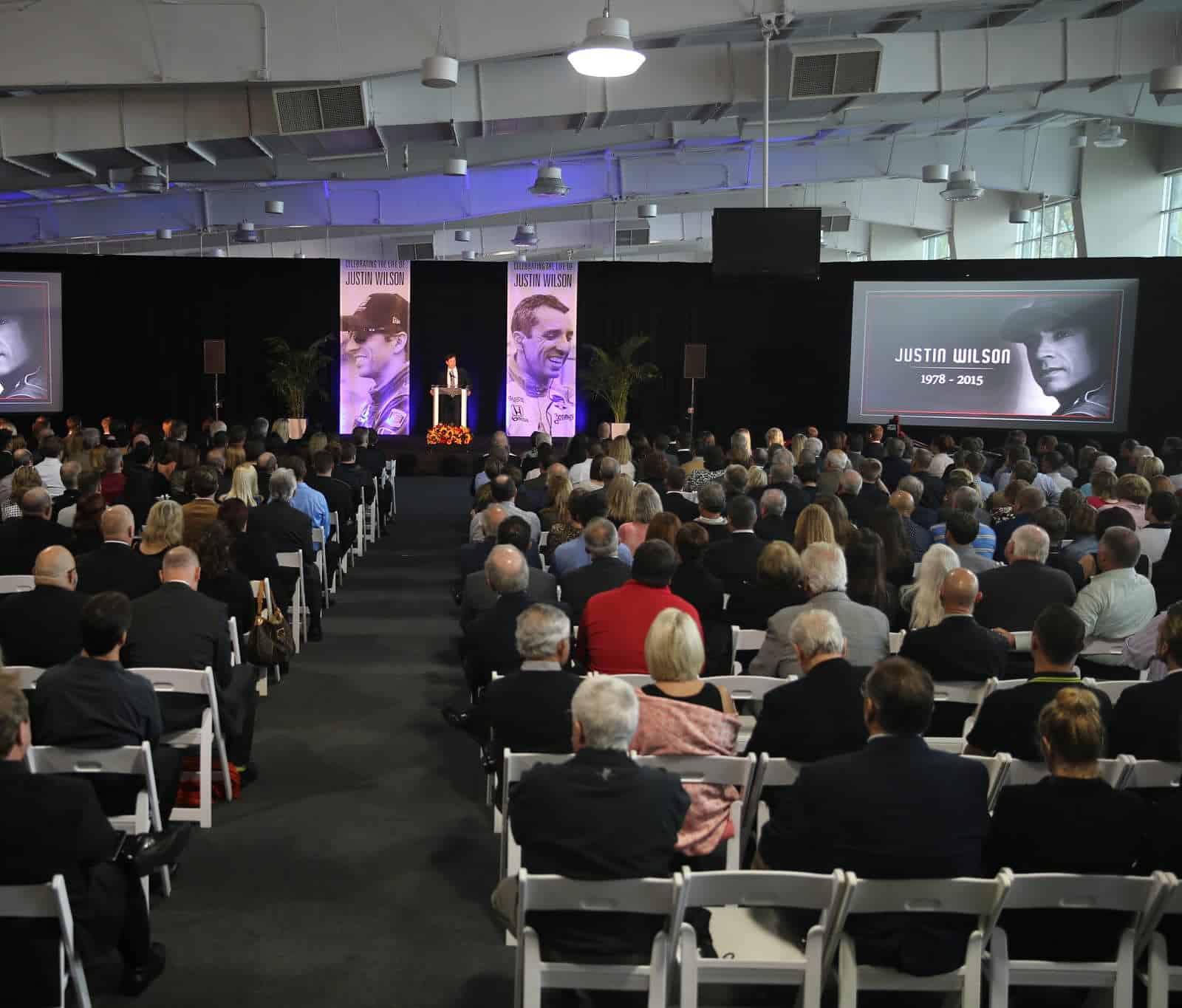 Dark, ominous clouds and steady rain washed over the Indianapolis Motor Speedway, adding a hint of fall chill to the air as the Verizon IndyCar Series community gathered to celebrate the life of fallen comrade Justin Wilson.

The weather, while common for the Midwest as summer turns to fall, proved symbolic for the evening, as drivers, teams and media attempted to find solace and contentment amongst the most tragic of circumstances.

Tuesday’s “Celebrating of the Life of Justin Wilson” served as the final formal gathering for fans and friends of the Sheffield, England native, a chance to remember the good times had with Wilson, who died Aug. 24, before attempting to move on.

Boy Scouts, whom supported Wilson throughout his career, handed out “#BadAssWilson” pins at the entrance to the IMS pavilion. The Rolling Stones, one of Wilson’s favorite bands, played over the sound system as people filtered in. Wilson’s trademark smile graced photographs throughout the facility, while his name shone brightly above the speedway on the track’s electronic scoring pylon.

With Wilson’s wife Julie in attendance, some of Wilson’s former team owners and closest friends took the time to share their feelings and stories with IndyCar’s gentle giant. Wilson’s daughters, Jane, 7, and Jessica, 5, did not attend, but were pictured throughout the night in their father’s arms, his pride as a father evident by his trademark smile.

The event, streamed for fans on IndyCar’s website, began with a brief introduction from IMS President Doug Boles and a showing of the touching tribute from Robin Miller. Wilson’s brother, Stefan, then stepped up to the stage as the first official speaker of the event.

Reading a letter written by Julia, Stefan invoked both tears and smiles from the room.

“Justin was mine and the girls’ hero, and this has made me realize he was that to everyone else, too,” the note read. “Not even I realized how big his heart was.”

The letter went on to tell of Wilson’s love as a father, discussing his struggle to read bedtime stories to his girls despite suffering from dyslexia.

“(They) are missing their best friend,” Julia wrote.

Wilson, 37, worked with dyslexic children around the world during his life, giving kids suffering from the same struggles he had endured someone to look up to. A local karter Wilson had befriended was among the crowd for the event.

Among a series of videos played following Julie’s letter, Wilson said during rapid-fire questions that he hadn’t read a book in “a long time,” inciting laughter from the crowd. He also admitted that his favorite thing to do was “go fast,” and said he was best at “being a father.”

Julie’s letter ended with a light-hearted tale of her first encounter with Wilson, coming at a party. Upon hearing tales of Wilson’s shyness and sobriety from friends, Julie was surprised to observe Wilson arrive tipsy and make “a beeline for the jello shots.”

Wilson, attempting to be suave, would later miss the door he attempted to lean against after building up enough courage (liquid or otherwise) to talk to Julie.

“I’m trying to not be sad, Julie,” admitted Shank, who’s Michael Shank Racing team fielded Wilson for 10 years, including a 2012 victory in the Rolex 24 Hours of Daytona.

“I’m just really sad,” said Shank, holding back tears as he looked at Wilson’s smile on a nearby photograph. “But, as it turns out, we were the lucky ones.

“Justin taught us to be better, more humble people. Justin showed us how patience and humility are supposed to look.”

While he couldn’t be in attendance, NASCAR driver AJ Allmendinger took the time to record a video message for the event. Allmendinger, who was teammates with Wilson in Champ Car and for the aforementioned Rolex 24 victory, joked about his friendship with the Brit. The drivers, separated by 10 inches of height, required the use of an insert to share the same sports car. A video shown by Shank to depict the driver swap incited laughter from the crowd.

Of the many stories shared about Wilson throughout the hour-long celebration, perhaps the funniest came from Germany. Following dinner at a small German village, Wilson and his teammates split into teams to compete on a race down a hill with hedges of increasing height. Standing at 6’4,” Wilson’s height allowed him to tumble over the final hedge first. However, his tumble turned into a roll down the hill, through poison ivy and over the top of a young couple “taking advantage” of the nearby clearing.

Laughter broke out across the room.

IndyCar champion Scott Dixon isn’t one for public speaking, but the New Zealander overcame his discomfort to give a toast upon realizing Wilson would to the same for him.

Raising their glasses with Dixon were friends and stars of the IndyCar paddock, including Michael Andretti, who’s Andretti Autosport team Wilson was driving for at his death, Dale Coyne, whose Dale Coyne Racing team earned their first two victories with Wilson at the helm, and a plethora of drivers from the IndyCar paddock coming to support Wilson’s family.

When the event was finished, classic tunes from The Rolling Stones returned over the sound system. Attendees were encouraged to head over to the nearby reception area to partake in Wilson’s favorite drinks, Coors Light and margaritas. The mood lightened, conversation commenced, and everyone began the slow process of celebrating Justin’s life and moving on.

Outside, the most peculiar thing occurred. Dark clouds remained over the 2.5-mile speedway, but the rain had stopped.