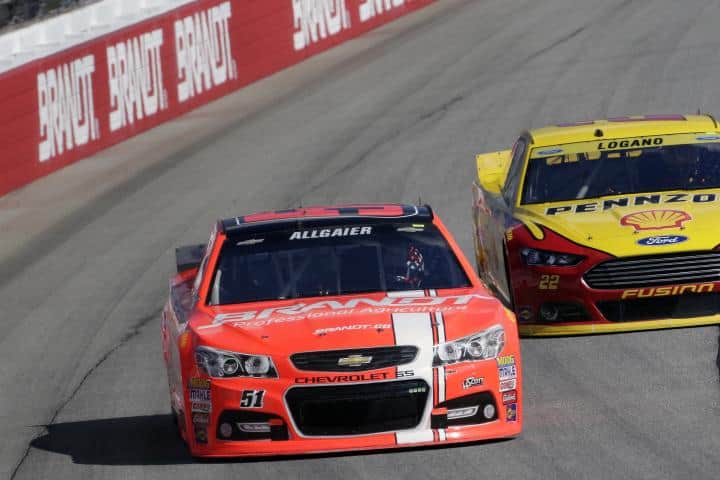 Did You Notice? Owners are desperate to inject some long-term financial stability into their teams? NASCAR met with the Race Team Alliance Tuesday and is working on a proposal that would introduce a type of “franchising” system assuring Sprint Cup teams both leverage and automatic qualification for the 2016 season and beyond. NASCAR spokesman Brett Jewkes made it clear both sides are far from reaching a conclusion, stating, “Today’s meeting was one step in the process. There is still a lot of work to be done and that will continue over the coming months. We understand there will be speculation and rumors related to the concepts outlined today, but would caution against coming to any conclusions as we work toward final decisions.”

Whatever the choices, it’s clear today’s group of owners feels a need to protect their assets. The reaction is understandable in the face of grim financial realities; purses are down, a major team (Michael Waltrip Racing) is folding and television ratings for stock car racing are the lowest they’ve been this century. Putting a franchising system in place ensures the Richard Childresses of the world they’ll get some value for their lifelong devotion of the sport instead of a bankruptcy notice if all their sponsors leave.

They don’t need to worry, like the former MWR, whether their competition level goes down the tubes; right now, the Sprint Cup Series is barely filling a 43-car field each week. No new owners are on the horizon and their lower-level series need start-and-parks to fill out the grid. Qualifying each week for these owners is not an issue; it’s finishing 30th and missing the Chase in NASCAR’s new format, turning sponsors away, costing them media time and further depleting their resources.

Honestly, in some cases even missing the Chase is not enough. Just think about the cars that have had unsponsored races in recent years. Carl Edwards’s former No. 99 car comes to mind with Jack Roush, along with Dale Earnhardt Jr.’s No. 88 with Rick Hendrick.

To me, the movement toward franchising is also about the old guard protecting what they have, reaching into NASCAR’s deep pockets to produce financial stability in order to keep from going under themselves. It’s a reaction to current events instead of proactively looking ahead and planning the sport’s future. That’s what concerns me, whatever the result. Protecting who we already have doesn’t address the question of what will happen after they’re gone. Who will the next Roger Penske be? Rick Hendrick? Toyota Camry? Jeff Gordon? How will they build themselves up in the sport and compete effectively with the owners already there?

That’s why, in the face of franchising NASCAR has a tremendous opportunity to reframe the sport. Let’s say they offer a “medallion” program, offering free spots on the grid to any owner who “buys in.” You know what the limit for those spots should be? One. Not four. Not three. Not two. One. Set a baseline of protection now so you can add more owners into the fold later. Saving 40 spots for 10 people – making 10 four-car teams, which feels like where we’re heading to some degree – does nothing to address the problem. Band-Aids stop the dollar bills from falling out, but they’re not the solution to more coming in.

Let’s hope all sides come to a decision that benefits not just NASCAR, not just the owners, but the health of the sport in general. It’s a crucial decision.

Did You Notice? Tony Stewart‘s retirement starts a domino effect that leaves one driver looking for work? Clint Bowyer’s signing with HScott Racing, likely to be announced this weekend as a one-year stopgap before joining Stewart-Haas Racing, leaves promising sophomore Justin Allgaier out in the cold. However, Allgaier – like Bowyer – comes paired with a sponsor, BRANDT, supposedly in position to push millions toward another Cup Series opportunity in 2016. Where could he end up with most of the other Silly Season dominos falling into place? Here are some options as we look ahead toward the short list of musical chairs remaining….

Richard Petty Motorsports. Rumor has it Sam Hornish Jr. is out of the No. 9 car following the season, as he hasn’t attracted enough sponsorship to keep the seat. Indeed, just three top-10 finishes have made the year a huge disappointment. The former IndyCar vet has been virtually invisible even after a crew chief swap (Drew Blickensderfer to “Bono” Manion) midseason. Investor Andy Murstein is looking for a mid-level replacement that’s shown flashes of future potential, works well with others (Aric Almirola) and has a financial backer that helps boost his profit margin. Allgaier would seem to fit that bill even though Ford would love to see David Ragan back inside their camp.

Front Row Motorsports. Cole Whitt appears set to return for 2016, but the No. 34 car has been a roundtable of Chris Buescher, Brett Moffitt and several others since Ragan left the season. Allgaier would bring much-needed stability and an economic boost to a team that needs a few extra million in order to move up in class.

The Xfinity Series. JR Motorsports is looking for more sponsorship and Allgaier could follow the path of fellow middling Cup driver Regan Smith in taking a step back, however briefly, while plotting a more effective path forward. Bringing in money could also pave a path at several Ford operations. A longshot? HScott Motorsports with Chip Ganassi. A source claims Scott would have loved to keep Allgaier in the fold, but NASCAR blocked any type of expansion for any team with their franchising plan coming. Throwing Allgaier back into the NXS, at least for a year where he can run for a championship, could be a short-term solution until Bowyer moves on in 2017.

Roush Fenway Racing. It seems like an impossible dream, right? Probably. RFR has some of its own talent languishing in the NXS, with both Chris Buescher and Darrell Wallace Jr. angling to move up to Cup someday. But this organization could use a little more money, and rumors still persist Ricky Stenhouse Jr. could be released from the No. 17 car a year early.

Where Allgaier lands will put the last threads of Silly Season into place. Yes, Ty Dillon is still potentially available but needs to raise enough money for grandfather Richard Childress to spearhead a successful transition to Cup. They’re not going to run Ty just so he can run 35th driving an unsponsored car for Circle Sport Racing every week.

I never would have thought Justin A. was a “promising” sophomore in Cup Maybe in Xfinity many moons ago, and that never materialized. Just my observation…I think Clint will do well in that ride.

He has a sponsor, that is all that matters in nascar these days.

I know silly me…I always think talent first. What a dummy I am.

Maybe the talent is there but maybe the underfunded team can not produce . With the resources Justin has from the team he has done a very good job.. You can’t expect him to have the same finishes as the Top Tier Tieam.s

If there isn’t enough money to put a ride under you how much talent you have is irrelevant. Simple economics.

I still say from the lower series to here, he just doesn’t have the talent, and him crashing into walls and fellow drivers has nothing to do with the car, it is him.

You mean having the ninth fastest time out of 44 cars and not getting to race might turn off some sponsors? Who woulda thunk that. I’d love to be at the desk when Brian explains that to a potential sponsor.

You mean having all the non-chasers disappear during the chase movies might mean sponsors don’t come running up to the owners begging to put their money in? Wow! I am shocked and have been for years (since the chase started).

Come on,Tom. Do you really think that NASCAR is going to tell Rick Hendrick he has to get rid of 3/4 of his organization?? Same with Childress and Penske. Your proposal of one team per owner is NOT GOING TO HAPPEN.

Also, LOL at your breathless use of italics…”lowest they’ve been…this century….”. As if you’re talking about decades and not a ten year falloff from their peak in 2005. The century is only 15 years in, dude.

I think the whole point of this “franchising” effort is to attract new owners. Right now it doesn’t make any sense to start a Cup team. There is no long term value in it. I hope this works out in a way where a new owner can start a team and build it up with the belief that if they walk away and sell, they have more value than just the shop, cars, parts and pieces. I think for this to work there has to be some better form of revenue sharing (e.g. NFL, MLB) that provides some guaranteed value over just a spot on the gird.

I’ll take a wait and see approach to this franchising movement. If it is in fact a move to attract new sponsors, then I would love to see team numbers reduced by 1 according to some metric as more owners enter cup, but I been around a long time and know that ain’t gonna happen!

I feel there is NOTHING Worse than being amped up for a Race and Weather Delays have fans in the Outfield or Worse with no real tangible indoor shelter for lightning. I know not everyone’s Indy, but, Indoor Storm Tunnels need to be UP! And, secondly, I agree with Franchising to an extent, and that extent is the Scared to Lose Scare Tactic. I would like to say for 2016, my personal NASCAR Rule is No Qualifying, Refer to Practice. No Practice and No Qualifying, Refer to Drivers Points. I hate to keep soaping away on the Soapbox, but, what is the purpose of Owner’s Points Anymore?

Did you notice that there is a lot of talk about the “chase/playoffs” but not very much of it is positive? Think that may have any bearing on the ratings being down?

Maybe you are just hanging around with too many negative “fans” and online biatching sites, Gina. FS is surely Number One in Debbie Downers.

No I don’t think the Chase has anything to do with it. I think its a combination of football season and the fatigue that viewers get from too long a season.

As I stated in another post – could someone explain to me exactly how franchising would add any value to a NASCAR team? In stick and ball sports, the franchisees each have their own facility, which adds value, and generates income for their franchise. The only way this could work in NASCAR would be for each team to have their own track – ain’t gonna’ happen!!

How long will it be until nascar gets a under 1.0 tv rating with a not rain delayed event?

I’m guessing not too long. I love baseball because my Grandfather loved it and introduced me to the game. NASCAR seems so intent on chasing away all the Grandpas that they haven’t notice all the grandsons they are potentially chasing away with them.