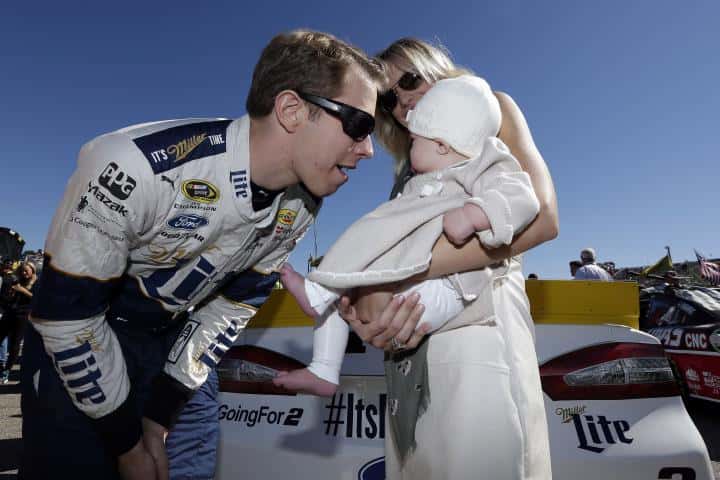 Dale Earnhardt Jr. posted a disclaimer for those who live in North Carolina. Earnhardt then announced the news of his niece passing the state’s drivers’ education test on Wednesday. Surely Karsyn isn’t that bad!

Doug Rice shared this photo while covering the race weekend for PRN at Kentucky Speedway. These jukeboxes would eventually be awarded to the winner at the 1.5-mile track. It has to be one of the coolest trophies in all of NASCAR.

Todd Bodine decided to promote research for ovarian cancer during a broadcast for NASCAR on FOX. Bodine posted this tweet that showed his support for the cause and Sherry Pollex. Pollex, girlfriend of Sprint Cup Series driver Martin Truex Jr., was diagnosed with ovarian last year but has since recovered.

Been a long week with my little guy sick. We've had a great weekend so far can't wait for tomorrow!!! #4thewin

Kevin Harvick posted this tweet over the weekend at New Hampshire Motor Speedway expressing how excited he was for the race. Harvick also had another issue on his plate throughout the week. We hope Keelan is feeling better and is back to bouncing off the walls!

If Rick Allen was in the Geico, golf announcer commercial, he'd be like "WE GOT PROBLEMS. THERE'S A DAMN KRAKEN OUT THERE. CAUTION'S OUT."

NASCAR Wonka posted this hilarious tweet on Saturday afternoon if Rick Allen happened to be featured in GEICO’s Kraken golf commercial. It would definitely make an interesting television commercial for sure! Let’s just all hope that this doesn’t occur in real life.

NASCARCasm posted a new idea for NASCAR to implement under a red flag. NASCARCasm proposes that NASCAR should have Beyoncé perform for all of the drivers as they wait inside their cars. Sure sounds like an idea that just might be approved!

Am I disappointed, yes. ? Is the sun going to come up tomorrow, yes. ☀️ Am I heading to snuggle my little man, YES. ??#allicanask4

DeLana Harvick, wife of Sprint Cup Series driver Harvick, posted this tweet following the Sylvania 300 at the New Hampshire Motor Speedway on Sunday. Life goes on no matter how bad of a day you had. It’s a lesson that all professional athletes should take note of.

Samantha Busch posted this hilarious photo of her son Brexton on Sunday before going home. We hope they all had a wonderful flight home and that Brexton has his pilot’s license. We assume so because he looks so natural in the pilot’s seat!

Having a case of Deja Vu@epaigewhite accused me of jumping the start on dinner. Now I'm Serving a pass through penalty in the living room

Brad Keselowski sent out this tweet on Monday afternoon. Keselowski had to serve a pass-through penalty for starting on dinner way too soon. Let’s hope that he didn’t have to serve too many of these!

What did Matt Kenseth do the day after his win at New Hampshire? Watch the Packers play the Chiefs on ESPN’s Monday Night Football of course! It looks so peaceful and quiet and we wish we could join in on the fun.