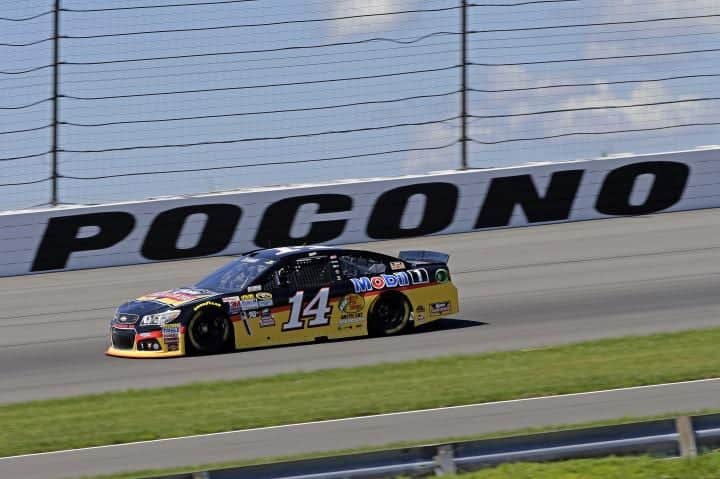 Wednesday, Tony Stewart made it official: he will retire from NASCAR Sprint Cup competition following the conclusion of the 2016 season. The announcement was made at 1 p.m. during a special press conference held at the Stewart-Haas Racing shop.

“It was a choice that was 100% mine,” he said. “I had more people try to talk me out of it than anything. It’s a bittersweet day. The great thing is I’m not going anywhere. NASCAR will probably be the most disappointed because they aren’t getting rid of me. I’m going to enjoy Stewart-Haas Racing. I love this series, I love NASCAR, I love working with Mike Helton and Steve O’Donnell. That’s why we’re staying with this: it’s the people. That’s the reason I’m not going anywhere. I’m not leaving the sport I love, I’m just changing roles.”

Stewart is currently 25th in Sprint Cup points, earning just two top-10 finishes and four DNFs. He has struggled the previous two years and said retirement was a consideration at the end of this season on more than one occasion. The more it was discussed, however, the driver nicknamed “Smoke” said he needed to do one more season for the fans.

“It’s important for me to do this for them,” he said. However, when asked if Stewart is planning a large retirement tour such as those that Rusty Wallace, Mark Martin and Jeff Gordon have done, he said no. “I don’t think I’m worthy of that kind of admiration,” he said. “I’m not really that kind of guy. I’m content to be around the racing community. They can just send me a note from the track president saying ‘thank you’ and that’s good enough for me. That kind of celebration is reserved for somebody like Jeff.”

While he hasn’t won since 2013, Stewart is looking forward to one final season in the Sprint Cup Series and is looking to go out on top.

“[2016] isn’t a ride it out year. I still want to win races,” he emphasized. “I can’t think of a better way to go out than to go out on top and win races and a championship. I don’t have to worry about making anybody mad and have to deal with it in 2017. I can rough everybody up if that’s what it takes to go out on top.”

Moments after Stewart announced his retirement, he brought out the driver that will replace him in the No. 14 beginning in 2017: Clint Bowyer.

“What an unbelievable opportunity, to think how my year started,” Bowyer said, recently released from Michael Waltrip Racing effective the end of 2015 as that team will cease operations. “You thought you were set and all of a sudden you’re not. That led to a door opening at one of the powerhouses of this sport. I always enjoyed the fact that Tony Stewart’s character was on the racetrack. Just knowing your name is attached to this is something I’m very proud of.”

Turning to Stewart, he then joked, “That being said, I’m glad you decided to retire and open this seat up.”

It’s a good relationship already, one that should only continue to blossom. Both drivers possess the same type of aggressive mentality on-track and won’t just “move over” for any competitor coming up behind them.

“Clint fits that style that AJ [Foyt] and I always had,” Stewart said of his newest driver. “I think he’ll carry that torch well.”

Stewart made it clear that while the No. 14 will be Bowyer’s, he will not be stepping away from racing. “I’m not retiring from racing, just from Cup racing,” he said. He expressed interest in running a Whelen Modified race at New Hampshire Motor Speedway, the Truck race at Eldora, the Rolex 24 and even perhaps a return to sprint car competition. He even joked about running a second Formula 1 car for SHR co-owner Gene Haas. “I apologize in advance for the cars I’m going to crash,” he told his co-owner.

For Haas, Stewart’s retirement will mean the original drivers for his then two-car team will have moved on; Ryan Newman left after the 2013 season to join Richard Childress Racing. “It was a blink of an eye for me to join up with Tony, and here we are, talking about his retirement,” he said.

“We started this in 2009, and we were one of those backmarker teams. We led a few races but never actually won one. Joe Custer was really instrumental in putting pieces together, and Tony had some kind of interest in change. If you’ve ever been around racers, they’re looking for change. Change in racing is pretty much standard. All the doomsayers beat up on Tony. Even I had to have that question with myself. It was a heck of a step for Tony to do something like that, leaving the security of his team as a championship driver.

“Without Tony, we wouldn’t turn into the super team that we are now, winning two championships. The value was in the combination of the two of us. You put those two together and you have a NASCAR superstar team. Drivers come, drivers go. It’s just a part of what you do in racing. I think this is a smooth transition, and it allows SHR to navigate the waters. This transition will be something that this company needs to do. It’s not a one-shot wonder; it’s a team that can compete.”

Stewart and Haas then outlined what their specific goals are for their final season together with Stewart driving: winning the Daytona 500, the Southern 500, the Brickyard 400 and the championship.

LUNKENHEIMER: Stewart Retirement Not All Bad

FESKO & BEARDEN: Who Had The Better Career, Stewart Or Gordon?

Despite being a devoted Ford-ie, I’m in lock-step with the Big Boss on this one…
“When I think of Tony Stewart, unmatched passion and a pure love of the sport come to mind. He has won championships and millions of fans. But he has given back so much more, and that’s what I admire most. Today’s news was bittersweet for all, but we know Tony will continue to be a big part of our sport in his roles as a team and track owner.
On behalf of the entire NASCAR family, I thank Tony for his many years of excellence and competitiveness, and wish him nothing but the best in his final season as a driver in the Cup Series.” [Brian France]