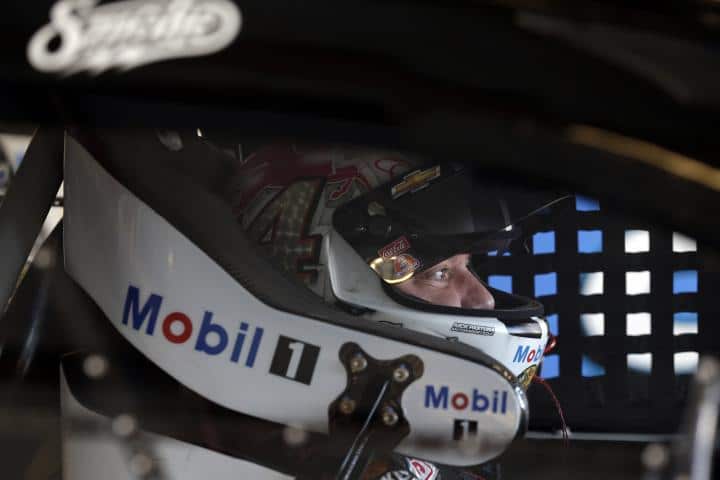 The changing of the calendar comes across as an appropriate thematic concept for what is currently happening in NASCAR. With October letting its presence be known again, it marks the beginning of the sunset of the season as just eight races remain on the Cup schedule. So for all of our collective griping, enjoyment, haranguing, wonderment and frustration at what happens both on and off the track in this sport, it will soon enjoying its hiatus.

For four drivers their season, in many ways, ends this weekend at Dover. With Clint Bowyer’s appeal being denied, he’s certainly one of those in that situation unless he suddenly finds the speed he’s been missing all season and steals a win. (No basis to the idea that the governing body went after Bowyer in some kind of retribution to Rob Kauffman.)

Not to be mean-spirited but Paul Menard, thanks for playing. You’ll likely be exiting the championship picture by the time the weekend is up. Did anyone really notice he was in it to begin with? Sure, there have been a few mentions, but the decidedly slanted TV coverage doesn’t even cover the backmarkers in the Chase, er playoffs, much.

What looks to be the entertaining aspect for Dover will be a four-way battle between Kevin Harvick, Kyle Busch, Dale Earnhardt Jr. and Jamie McMurray to earn the last two spots in the field of 12. For Harvick and Busch, their ousting would be a wipe-the-sweat-from-the-brow moment. The former has shown speed and consistency all year long and shouldn’t be derailed by the Chicagoland hiccup while Busch, with four wins, has the second most of any driver. At this point, it feels like Earnhardt and McMurray are just hanging on, hoping to eke into the next round.

But you know who looks safe otherwise? Joe Gibbs Racing. Should Busch fail to advance, the organization will still have three cars moving forward and it continues to look like the team with the most overall speed. Sure, Joey Logano and Brad Keselowski are still hanging in there and it’s not like they’ve been getting lapped every race. Rather, it just seems like Gibbs has something others don’t.

All of that means cue the theme from Jaws because Jimmie Johnson is lurking – something that should make everyone other than his fans elated.

Happiness Is… Sayonara. Saying goodbye to September is one thing, but saying goodbye to another champion is another.  While Tom Bowles lamented and showed concern that Tony Stewart’s retirement would move the sport to some kind of crumbling point, that does not seem to be the case. Memento mori. Basically paraphrased, it means that this, too will pass. Stewart is quite the figure in the sport, known as much for his racing prowess as he is for his complicated, and often surly, personality. One last year gives him the ability to offer a nod to all of those whom he’s embraced AND pissed off during his career. Will we see the same reaction from tracks and fans as has accompanied Jeff Gordon’s bon voyage tour? Who knows.

The thing that Bowles, however, was addressing was not the retirement of Stewart as much as there have not been enough successful young drivers for fans to place any kind of social capital investment. It’s hard to get behind a “young gun” when the best he’s gotten is a ninth-place finish while continuing to show an average of 17th. The numbers may be made up but people like winners and the reason that Gordon and Stewart attracted such large fanbases is because of their victories. With Stewart leaving, it feels like the last one retiring from a vaunted draft class, meaning it’s time for other drivers to step up.

Happiness Is… Weather. Happiness Is loves to lampoon those who say things like it looks like weather is on the way; weather is approaching; or any of that kind of silliness. Weather is always happening. Don’t use weather when rain is what’s meant. This weekend at Dover, it looks like more than rain will be conspiring against NASCAR as the East coast plays cat and mouse with Hurricane Joaquin. So the first thing to mention is for everyone to be safe.

From the positive spin department, there may be another way of looking at things. If the race is postponed from Sunday, that might mean that it’s not airing against that vaunted entity known as professional football. With the ratings continuing to be scrutinized – even though the races are shown on a network many people don’t get and go up against the NFL, both factors that kill ratings for anything – perhaps having the race run on Monday would bring a little more attention to it. That thought was a happy one until two things: 1) rain may last through Monday and 2) Dover does not have lights.

Happiness Is… Money. There’s nothing to be written about money from some philosophical perspective that hasn’t already been done. This spot will not even attempt to do so. However, the power-brokers of the sport got together this week to start figuring a way to protect their interests and ensure that even as viewership is lowered, race purses slashed and overall social appeal muted, they would still get their share of the pie.

Sure, everyone’s favorite whipping boy Brian Z. France has been enjoying fattening his and other’s coffers, but now it’s time to spread it around. Is NASCAR headed toward arrangements that look more like F1 or is it just going to tweak things a little bit to give the owners a small percentage of the monies coming in? That’s the big mystery. The follow-up will be to wonder how it may impact the sport. Are smaller car counts in the works? More substantial changes? In many ways, it feels like NASCAR is at a moment where it may be forced to redefine many things about itself – and that will be fascinating to watch.

13 thoughts on “Happiness Is… Sayonara, Hurricane Joaquin, and Money”