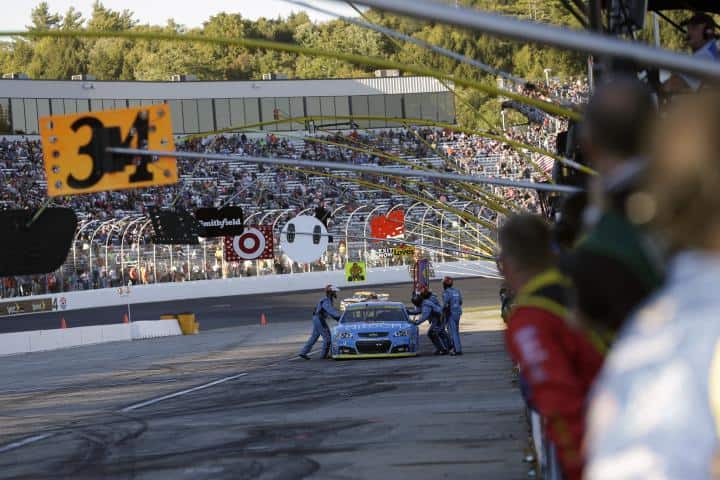 The Sylvania 300 at New Hampshire Motor Speedway was showered by controversy by restarts, however that wasn’t the only news to come out of the race as NASCAR has handed out warnings to several teams following the event.

Kevin Harvick‘s No. 4 team has been docked 15 minutes of practice time for this weekend’s race at Dover International Speedway for failing to pass pre-qualifying inspection three times and pre-race inspection twice. The No. 4 would eventually pass inspection, but will be deducted time. Harvick finished 21st in the event after running out of fuel while leading in the closing stages.

Two other teams have also been docked 15 minutes of practice time: the No. 7 team of driver Alex Bowman and the No. 62 team of driver Timmy Hill. Both of those teams arrived late to qualifying and race inspection.

The No. 2 and No. 17 teams of drivers Brad Keselowski and Ricky Stenhouse Jr. have been issued written warnings for failing qualifying inspection once.

Following an altercation between Brian Scott and Darrell Wallace Jr. in the Xfinity Series last weekend at Kentucky, Wallace has been placed on probation through Dec. 31, along with Scott wife’s Whitney. The bus driver for the No. 2 Richard Childress Racing team, Brian Allen, has been suspended from NASCAR indefinitely due to his role in the altercation.

All three violated sections 12.1 and 7.5 of the NASCAR Xfinity Series rulebook. The altercation came from an incident which loosened Wallace’s wheel after contact with Scott’s car. The altercation proceeded and even continued on twitter later on in the night.

Additionally, the No. 3 Richard Childress Racing team and the No. 25 Athenian Motorsports team have received written warnings for failing to pass inspection too many times last weekend at Kentucky Speedway.

All of this Scott (RCR) post race stuff is just bluster & cover my axe non-sense to conceal (imo) pretty blatant RCR race manipulation! Hold my watch goons-man-ship racing, no doubt about it in my eyes! Scott in the RCR #2 clearly moved up a lane, hip checking the Roush Fenway Racing (RFR) #6 of Wallace in the process. CLEARLY the RCR #2 of Scott did this to allow his teammate in the RCR #3 of Ty Dillon to pass to the inside. #3 Ty (RC’s grandson) just happens to be in second place in the driver’s points standings, while first in points is being held down by the RFR #60 of Chris Buescher And #60 “just so happens” to get his run blocked-out by this 3 wide RCR fracas in front of him. Yeah right! Imo this is clear race manipulation, of which race communication must be heard by Nascar to penalize, which apparently was not available & does NOT indicate manipulation did NOT occur, only that it can not be proven, therefore it is “unenforceable” in Nascar’s version of reality
Section 12.1 covers general guidelines for penalties, Section 7.5 states: “Members shall not make or cause to be made a public statement and/or communication that criticizes, ridicules, or otherwise disparages another person based upon that person’s race, color, creed, national origin, gender, sexual orientation, marital status, religion, age, or handicapping condition.
Based on the section cited here & based on unofficially reports regarding the context of Bubba’s angry tweet, I “guess” an online keyboard war ensued at some point post-race. The only bit that is being talked about publicly infers that Bubba (allegedly) referred to Mrs. Scott as being a [lower frontal female body part, I will refrain from mentioning]. If that was the start, middle or end of the war of words, I have no idea. Context is everything & there are no indication of the continuity or extent of this angry convo! So, judging by the penalties, I guess what Bubba allegedly said is not as offensive as what the bus driver said. Since, there only a very VERY few selective words in the English language that Nascar would find more offensive that what Bubba allegedly said, & since Bubba is of mixed nationality, I am left with a pretty clear impression of what the bus driver must have said. If you remember, NXS series driver, Jeremy Clements was indefinitely suspended for uttering a racial slur in referencing Curtis Jackson’s (50 cent’s) presence on the grid of the ’12 ‘Tona 500. Well, imo “THAT” word was most likely twitted or uttered by the suspended bus driver in question at Kentucky!
Oh, & I considering that this is just the latest in a string of questionable decisions & behaviors this year with Bubba. He has had TWO run-ins with his teammate & current NXS points leader Chris Buescher. One at Dover & another at Iowa. The Dover rub was in the later race stages, for a win, so imo, no harm – no foul. It happens! But the next rub, at Iowa, was early in the race & clearly avoidable. After that, the #6 (Wallace) & the #16 (Reed) swap RFR pit crews, essentially a demotion for Bubba. Now, THIS, after already being in the dog house, imo, does not bode well for Bubba’s RFR relationship. As a life long Ford-ie & RFR fan, I can safely say, Ford & RFR, namely Jack Roush (team owner), has a very VERY low tolerance for this kind of (calling a women names) garbage. Ford is meticulous about it’s public image, more to than Chevy or Yota anyway. So I appreciate Bubba’s efforts, but I doubt he will be with RFR or Ford next year.

You can always call some one a big, fat, slob though. Size is an open target.

It’s been at least three or four years in a row that the RCR #3 car has been penalized at the Kentucky Infinity race.