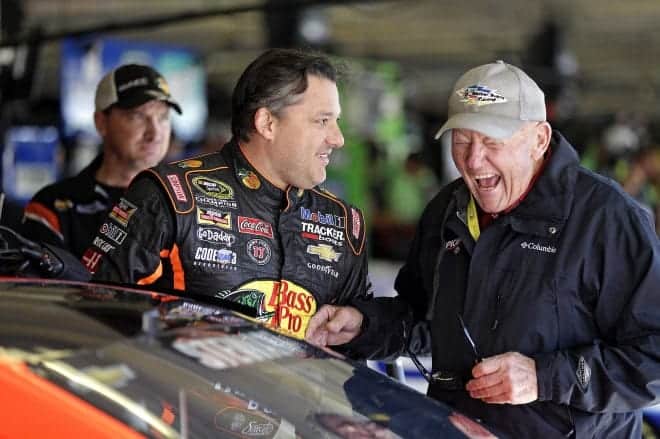 Wednesday afternoon brought the announcement many expected would happen a lot sooner than it did. Tony Stewart confirmed the news every major media outlet had been reporting since last weekend: he’s retiring from full-time Sprint Cup competition at the end of the 2016 season.

Is anyone really surprised?

Sure, it’s disappointing to see yet another beloved driver – especially someone that’s one of the last reminders of how NASCAR used to be – walk away from the No. 14 Chevrolet, but many predicted the move would happen after his broken leg in 2013. Once that didn’t happen, speculation again abounded following the terrible tragedy last August involving Kevin Ward Jr.

Instead, Stewart has soldiered on through one of his worst Sprint Cup Series seasons to date, just two top 10s in 28 races leaving him languishing at 25th in points. By comparison, even in his rookie season, the Indiana native posted three wins, 12 top-five and 21 top-10 finishes en route to a fourth-place result in the championship that year. In fact, Stewart has posted single-digit numbers in top-10 finishes for the last three years, failing to visit Victory Lane at the Cup level since Dover in 2013.

“You know, it was a choice that was 100% mine. There wasn’t any pressure from anybody,” Stewart said in a press conference from SHR Wednesday announcing his retirement. “If anything, it was the opposite. I had more people trying to talk me out of it than anything.

“You know, I think it’s a scenario where everybody in their career at some point makes the decision that it’s time for a change and it’s nothing that you plan. I think it’s just – I think it happens. I think deep down you know when it’s time to do something, to make a change like this.”

The thing that struck me during the entire press conference and follow-up questions was how happy-go-lucky Stewart seemed. As the weeks have gone by since last August’s tragedy, the old Stewart that we had grown accustomed to was returning, but he still wasn’t quite the same, probably because he couldn’t figure out the reasons behind his on-track struggles, especially this year.

But for a while there behind the microphone, he was happy, lighthearted and looked relieved. It was almost as a weight had been lifted off of Stewart’s shoulders. It was a conversation full of laughter and jokes rather than some somber, sad announcement. I could never begin to say that I know what’s going on inside his head, but it’s almost as though Smoke was thrilled to have his “secret” out in the open, which is something that, according to an Instagram post from Kevin Harvick, has been known about for a long time.

Before we go any further, though, let’s make it clear that Stewart isn’t leaving NASCAR. It’s actually the opposite.

“I love what I do with NASCAR and I love what I do as a driver, and the great thing is I’m not going anywhere,” Stewart said. “NASCAR is probably going to be the most disappointed of everybody today because they aren’t getting rid of me. They have to deal with me as an owner. There’s still the opportunity to get fined and there’s still the opportunity to be put on probation, just like always, just from a different capacity than now.

“I’m going to get to do a couple things that I haven’t been able to do. But again, I love this series. I love NASCAR,” he continued. “I love working with Mike Helton and Steve O’Donnell and the great people. That’s what it really boils down to, and that’s why we’re staying with all this is it’s the people. It’s all the guys in NASCAR. It’s all the guys at SHR, and it’s co-owners and other owners in the series, other drivers, crew chiefs. Those are the people that I’m – that’s the reason I’m not going anywhere. I couldn’t stand to be away from that family. Just changing directions a little bit, but I’m excited about it. I really am.”

Something else that stood out from Stewart’s statements on Wednesday was that he could have just as easily been done in eight races. That’s right, according to Stewart after such an extended period of struggle inside the car.

“There was a really good possibility that this would have happened at the end of this year,” he explained. “The reason that we decided to go ahead and run through the end of next year is 100 percent because of the fans that have supported us through the years.”

Unlike Jeff Gordon, who is on his way out at the end of this season, Stewart definitely doesn’t plan to quit racing anytime soon. In fact, it wouldn’t surprise me to see that he ends up behind the wheel even more, just in different places.

When pressed on whether lingering problems from his broken leg or lingering emotions from the tragedy last August had any bearing on his decision to walk away, Stewart adamantly denied that line of thinking.

“Not one percent of it has had anything to do with it. I mean, this is strictly what I want to do, and my leg feels fine,” he said. “There’s nothing wrong with my leg. The tragedy, nothing is going to change that. It happened, but it’s not going to direct the rest of my life. I’m still going to go race when I want to go race, but as far as the Cup Series, it had no bearing on that.”

Vocally, that answers that question although deep down inside, it wouldn’t surprise me if both had an impact on the decision, even if it’s more along the lines of Stewart not being the same since those incidents. Everything in life – both good and bad – shapes us as human beings and no amount of therapy, whether physical or emotional, can change the impact it has.

As for the future of the sport, how will it change with one of the last links to the glory days of NASCAR stepping aside at the end of next year? Stewart isn’t worried at all, citing “good young guys that we’ve seen from experience this year that can really drive race cars and make races exciting that are coming along.” One of them, Kyle Larson, was rumored to be Stewart’s replacement in the No. 14 car before Clint Bowyer became available.

“I promise you,” he said, “The sport is going to be healthy for a long time.”

So will Stewart, whose impact on NASCAR is one that won’t be forgotten. He’s been a guy that fans have loved or loved to hate. He’s had his spats with the media, the sanctioning body, his fellow drivers and even team owners. And regardless of whether it was negative or positive, he has always had a knack at keeping people talking. Stewart’s personality in the sport will truly be missed.

FESKO & BEARDEN: Who Had The Better Career, Jeff Gordon or Tony Stewart?

FESKO: Inside The Stewart Announcement

Translation: He loves Nascar and the community inside it, but is tired of the clown show that is the 38 week grind. He’s an old school racer and I’m sure, like Gordon, this Chase format and the hype surrounding it, is not something they enjoy.

It wouldn’t surprise me, since he is the owner of a team and can produce a car for himself anytime he wishes (with sponsors lined up to boot) if we see him in the Daytona 500 for the next few years and some of the bigger Cup races. He still hasn’t won the 500 and that I’m sure is something he still wants to accomplish.

Regardless, I think Nascar is going to take a huge hit in the fan department. Two rather large fan bases gone after next year. 2016 and 2017 should be interesting with regards to whether those fans stick around or not.

I wonder why he is putting himself thru another year. Retire now. He himself screamed “if I wanted to have a slower car, lower HP I would be driving in the Xfinity series. Or something like that. Who can blame him.