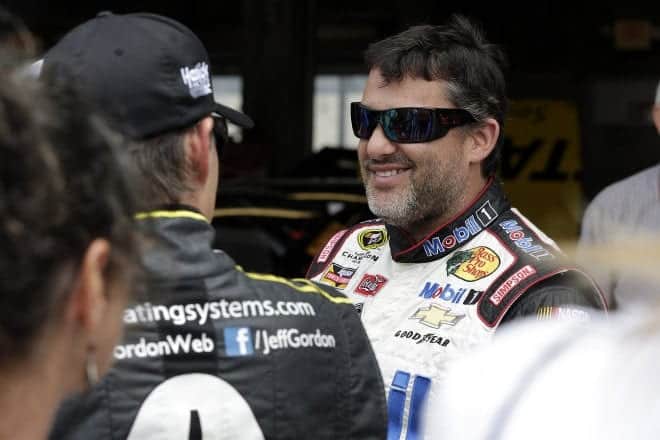 When the checkered flag drops at Homestead-Miami Speedway in 2016, the smoke will finally fade into the Florida sky as Tony Stewart will hang up the helmet on his Hall of Fame NASCAR Sprint Cup Series career.

Naturally following a career spanning three different decades is accolades, support and a whole lot of down time after it’s all finished.

For Stewart, however, keeping his ownership status at Stewart-Haas Racing and having his replacement driver for 2017 being the colorful Clint Bowyer, he will find no trouble staying busy.

“That was a hard thing for me,” Bowyer said Friday at Dover. “It’s obviously a once-in-a-lifetime opportunity, but with that opportunity you lose one of the boys. [One] that is a champion of the sport, a guy that I’ve always enjoyed just because of our backgrounds.”

Although the leave will be difficult for the hardcore fans of the 44-year-old, even the most experienced drivers are impacted from Stewart’s announcement

Jeff Gordon is eight races away from ending his illustrious career in NASCAR. Gordon and Stewart have displayed hundreds of memorable on-track battles with each other – and one off-track moment in 2000. The No. 24 driver said he is “torn” on Stewart’s retirement.

“That’s a tough one,” he said. “I’m torn on that one because I love Tony. I love seeing him out there. I’m not only a competitor that had the opportunity to race against one of the all-time best drivers I think I’ve ever driven against or watched.”

Transitioning to the booth for FOX in 2016, Gordon has noticed the sheer excitement Stewart has brought to the fans in the last 16 years.

“As a fan, I just love seeing him out on the track. He always keeps it interesting and exciting. His talent, you just never know when Tony is going to come out of nowhere and win the race, you cant ever count him out. You never know when he’s just going to go on a roll and win the championship. That’s just the kind of competitor he is.”

Gordon has seen “monstrous” amounts of awards – like 90 individual Monster trophies given at Dover for each of his 90 team members – support, kind words and tributes during his last season in 2015. Though Stewart stated he believes he doesn’t deserve such recognition, Gordon says he “has a career worthy of being celebrated.”

“My advice to him is to enjoy every moment because it goes by really fast,” Gordon said. “Have fun with it, celebrate it. I think that’s – the thing is, just like myself, he has a career worthy of being celebrated. He’s going to get a lot of accolades and support from the fans and the tracks and media because of what he’s done over the years. Enjoy it because he had a heck of a ride and he deserves it.”

“Tony is one of the most, if not the most talented racecar driver I think you could ever see,” Kenseth stated. “So he’s a guy that can win anywhere and certainly has had a very successful and colorful and fun career to watch – a lot going on.

“I think whenever you had a legend that ends up retiring and he’s a driver as popular as Jeff [Gordon] and Tony and things like that, you always start thinking about all the things you watched or maybe raced against him, some of the things he’s done and certainly I think the sport will miss him.”

Jimmie Johnson may be part of the “40 Club,” but he believes the older era of NASCAR drivers is over and Stewart doesn’t defy the natural change of all athletes.

“I have to say that Mark Martin racing into your 50s era is probably gone,” Johnson said. “The schedule, the demands, everything that goes on, I would say mid-40s is probably going to be that point for a lot of guys, and we have a lot of guys getting close to that age now.”

The six-time champion hopes the best for Stewart in his final year.

“At least we get another year with him next year and I certainly hope he gets the wins that he is looking for and leaves with a huge smile on his face,” he concluded.