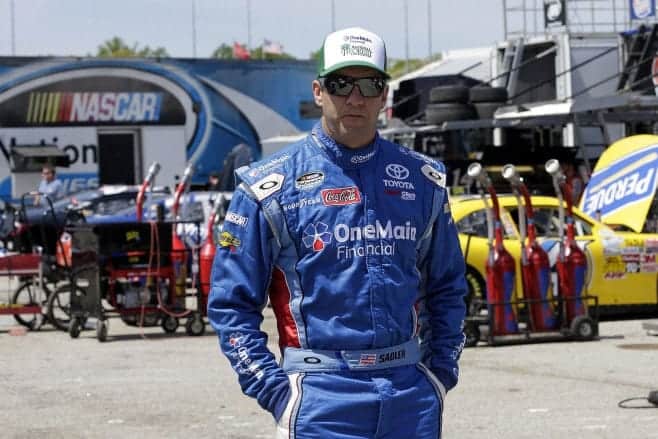 One piece of the JR Motorsports roster is officially set for 2016. Veteran Elliott Sadler and long-time sponsor OneMain Financial will join the multi-car team next year, competing for a championship in one of the team’s full-time vehicles.

A number and crew chief have not been decided for the 40-year-old Xfinity Series veteran.

“I want to be competitive in the Xfinity Series,” Sadler said in a press conference on Friday. “I want to be in the middle of a championship chase. There is nothing like leaving your house for a weekend, going to a racetrack and knowing you are getting an opportunity to lead laps, sit on poles, run up front and win races. That is all I have ever had as a goal.

“This opportunity for me is huge. I wish I could explain the whole history of how Dale and I have been friends for such a long time and why this means so much to me. My goal right now in my heart and soul and my passion is still very great everyday when I come to the track, but it is more what I do on Saturdays in the Xfinity Series.”

Sadler has worked with OneMain Financial since making his return to the NXS on a full-time basis in 2011. He has five victories throughout that time period, finishing runner-up in the championship battle in 2011 and 2012. In 2011, Sadler ran four events for JRM.

“We are very pleased to welcome OneMain Financial and Elliott into the JR Motorsports family,” said Kelley Earnhardt Miller, co-owner and general manager of JRM, in a press release. “Elliott has raced a few times for us in the past, and now together with OneMain Financial, we’re thrilled to put together a championship-caliber team for him in 2016. Off-track, JRM is looking forward to developing a mutually beneficial partnership with OneMain Financial and one that will help further their brand.”

Reigning NXS champion Chase Elliott will depart the company at the conclusion of the season, leaving an open seat for Sadler. The three-time Cup Series winner will take over Elliott’s slot in the team’s driver lineup after competing for Roush Fenway Racing in 2015. Through 27 races, he has four top fives and 13 top 10s, with Talladega being the only race that he has led over two laps.

“Right now, we have to jump in on this,” said Sadler. “This is great for me and my family. It’s definitely great for the OneMain Financial brand to be tied to JR Motorsports with what Dale Jr. has put back into this racing series.”

It’s hard to believe this guy won Cup races during my lifetime and now he’s on his 27th Xfinity team in 5 years.

No, it couldn’t possibly be his 27th team. No more than 15 different teams, tops.

It just seems like his 27th team. In seriousness, I think he has been on a different team each year since he returned.

Amen to that, who HASN”T he driven for? This (hopefully) is the last swan song. He hasn’t exactly lit it up in Xfinity. Jeez. He seems nice enough, but dang I thought for sure retirement was in his very near future. SMH.

They only have to change/move the driver’s name a little bit on the car. The team doesn’t have to learn a new name. If he doesn’t win now, then he should think about retirement. He is a class act. Good luck Elliott.