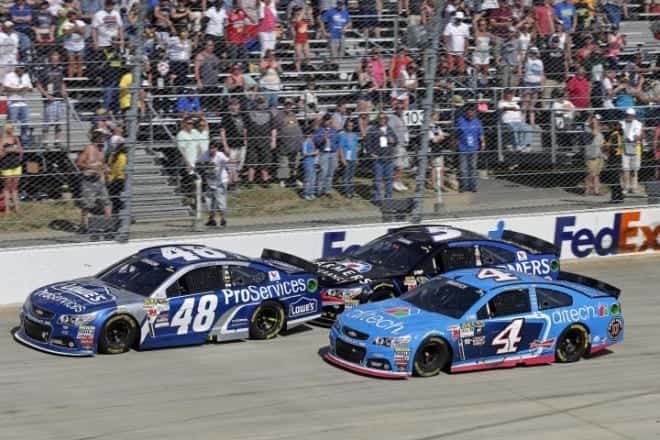 It’s September here on the East Coast of the good ‘ol U S of A, and every year around this time we find ourselves in the midst of what is known as hurricane season. It’s an oh-so-glorious time of year where massive tropical storms bear down on the American East Coast and ruin everything they come in contact with. Oh, and they make things wet. Very wet.

The NASCAR Sprint Cup Series will unfortunately have to deal with this reality on Sunday, as Hurricane Joaquin (who names these storms?) is making a beeline for the Delaware area and will likely hit the city of Dover sometime on Sunday. Yeah, not good.

It has been quite a while since the Cup Series has had to deal with something like this, so it remains to be seen how the industry will cope if the hurricane does in fact stay on track to hit the Delaware area. It could mean that the race does not go off until Tuesday or Wednesday, and with the current structure of the Chase schedule, a delay of that nature could lead to serious issues for the next race on the circuit in Charlotte.

With any luck, Sunday’s will hopefully be run to its completion without a hitch, but with weather forecasters being apprehensive about the track of Joaquin, it’s anyone’s guess as to whether this Sunday’s race will be contested at all.

If it weren’t for two measly laps worth of fuel last week, we wouldn’t even be having this conversation. But alas, we’ve reached round two of the 2015 Chase, and Kevin Harvick, the proverbial favorite to win the championship, is on the outside looking in with one race left before the first elimination.

The No. 4 team’s Challenger Round performance thus far could best be described as a comedy of errors, as extremely poor pit calls in both races have led to poor finishes on days where the No. 4 team conceivably could have won. And now, with the team sitting in 15th, three spots below the cutoff for the next elimination, they have only one surefire way at this point to get into the next round: win.

Harvick and the No. 4 team are built to step up in these kinds of situations, and they are pound-for-pound one of the three strongest overall teams in the garage. They can absolutely win the race on Sunday and advance. That being said, if they come up short, they will have no one to blame but themselves.

To this point, it has been a tale of two seasons for Jimmie Johnson and the No. 48 team. The team started off the year with a bang, grabbing four wins in the first 13 races of the season and establishing themselves as a bona fide title contender. But since then? It’s been tough sledding for Hendrick Motorsports’ flagship team.

Since Johnson’s Dover win, the No. 48 squad has only posted three top-five finishes and have generally been in a slump.  The team has turned it around to some degree in recent weeks and is sitting fifth in points, but if they want to be truly title-worthy, they’ll have to start putting together race-winning performances sometime in the very near future. And traditionally, that is what they have always done.

It’s very possible that the first of those race-winning performances could come this Sunday at Dover. Johnson is the undisputed king of the Monster Mile and is statistically the best driver to ever race at the facility. He won the June race here, and with his team appearing to slowly be working its way back to its usual form, could this be the race that sparks a seventh title run for Team 48?

Last week’s frenetic race in New Hampshire did not just ruin my Draft Kings profits (and I’ll be honest, I’m still recovering from that bad beat), it also flipped the Chase picture on its head. A blown-tire mid-race relegated Busch to a finish in the deep 30s, while a fuel miscalculation cost Earnhardt a top-five finish. In both cases, one poor race at New Hampshire has left each team fighting to hang on to their Chase hopes.

Earnhardt, the final driver who would make the next round if points stayed as they are entering Dover, goes into the weekend with a tenuous one-point advantage over Busch in 13th. 11th place Jamie McMurray has a one-point advantage over Earnhardt, and Paul Menard sits only one point behind Busch in 14th. All things considered, that means the final two spots in the Chase will likely go to whichever two drivers in this group finish the highest. That is provided that Harvick doesn’t win the race, which would conceivably leave one spot for these drivers to fight for.

No matter what happens, my estimation is that Busch and Earnhardt will be fighting over that last spot for advancement. Their numbers at the Monster Mile have been pretty close to even as of late, so this one is a literal toss-up that could come down to the last lap.

Either way, a big name is almost certainly going to get bounced after the first round of the Chase.

On #1, even if there were no threat of a hurricane, a 2:45 green flag is absurd at a track with no lights and leaves little wiggle room considering that the sun sets around 6:45 in early October in the East. Throw in what has become a tradition of fixing the track during the middle of races at Dover and you have the recipe for an asterisk race. Then again, this may be fitting since we have been in the asterisk era of NASCAR the last 12 years.

At the very least it looks like qualifying and practice will be rained out this weekend. If that is the case it is another mark against why the chase system is so unfair and arbitrary. Harvick will have less of a chance of making it to the next round (not that I mind that… I don’t like Harvick and it makes NASCAR look silly). He won’t get a chance to win the pole and get that first pit stall. He won’t be able to dial his car in during practice. In fact, no one will and that’s ridiculous given the importance of this race and the money at stake. The race could just be a crapshoot…but aren’t they all now (as is the championship).

Starting the race at 2:45 is also asinine. Only NASCAR could be that stupid (or greedy). Even if the track had lights, logic would dictate that you make the window for getting the race in a large as possible. What a bunch of idiots. This is the type of stupidity that makes me wish that it does rain on Sunday just to exemplify what a bunch of morons are running NASCAR.

and i’ll say it a third time….why start the race so late???? what is nbcsc broadcasting that is so important to delay the start of the race? i mean, are they doing this to pick up market share slack from the central and western time zones that might not tune in to a “normal” start time race (12:30)?

if they race, i bet it’s shortened because of daylight issues. with all the rain the area has had, i’ll be surprised of the track doesn’t weep.

I’m probably in the minority but I love Dover. The constant Chase chatter and Toyota manipuwins has finally gotten the best of me though so it is probably the last race I’ll watch this year. That is if they can get it in despite the weather and the brilliant administrators at NASCAR.

hang around for the giggles. Always something to goof on.

When you enjoy complaining about something you used to enjoy more than the actual something it is time to find something else to enjoy. ……..the meaning of that tortured thought would be crystal clear to everyone if we were all drunk…..I love you commenters!

ever been to an event and found that watching the people was more fun than the event itself? Same can apply to forums.

I’m from the area and there is some good news. Joaquin DeStorm has decided to amble out to sea. Fans boating in from Greenland beware. But that doesn’t mean we’re out of the woods. An unnamed Tropical Depression has been pelting the area since Wednesday. (After we had only one rainy day in the last 48) and it’s damn chilly as well. Bring a good overcoat. Tomorrow still looks iffy for the NXS race but Sunday is looking better. Right now there’s between a 25% and 60% chance of rain, but intermittent not steady on Sunday. It will be quite windy which combined with a high banked concrete surface makes Dover easier to dry than say Martinsville or NHIS. They could get the race in, but as some have noted above, the late start time has NASCAR in a box. I can’t see the race going beyond 6:40 and even at that you’d want a flashlight to find your way to the car. It’s dark out, and I mean DARK by 7.

we’ve had rain in ga for 3 days and it’s expected 3 more days. they’re forecasting 3″-7″ rain where i live.

i know from family up where you are, the ground is saturated so i don’t even want to imagine what the property is like surrounding the track at the campgrounds and all.

and besides….if that front would move that’s over the northern portion of the country, the hurricane could always change it’s path.

Concerning # 3. Not to worry, ole Chad ,Jimmie, and the 48 boys will be there at the end. Only thing to stop them is someone else’s screw up. Although if Harvick is eliminated early he could be that someone ………nah even that won’t happen. You don’t bite the hand that feeds you. ( i.e. Hendrick)

Bill B — the start is 2:45? Sheesh, I didn’t realize that and you are right, it is stupid. Fortunately we don’t have tickets. After the last time we were there, we decided we were not going to spend the $ to be aggravated by the parking and bored by the “racing”.

I agree with you on the basic unfairness of the crapshoot. NASCAR thinks this is so exciting, but I don’t.

Hope Gordon wins on Sunday. I’d like to see him get another win for his stats.

the race starts at 2:45? geez what a genius move that is! Not! Happily we don’t have tickets for the race. After last September’s mess with Dover and their parking, security and really boring racing, we decided there was no reason to go there again.

If it rains where I live, I’ll watch some of it. I hope Gordon wins, I’d like him to notch at least 1 more win before he retires.

well I see the comments both posted even though I got a website error on the first one. Although it may appear I have lost my mind and said the same thing twice, I did actually submit them at different times.