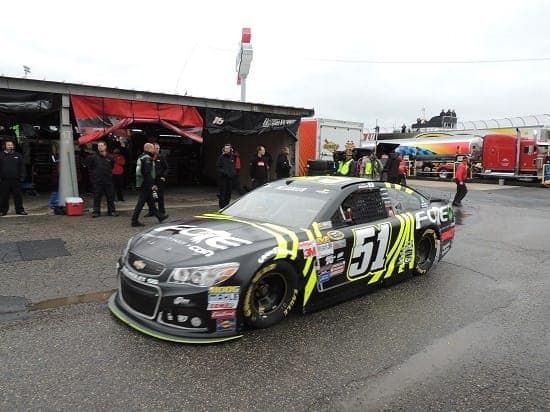 Sitting amidst the NASCAR Sprint Cup Series garage Saturday afternoon at Dover International Speedway, Justin Allgaier was the final driver to leave his team following an abbreviated practice session, something common for the HScott Motorsports sophomore.

However, it was not a normal Saturday practice for Allgaier, and it was not because of the wild weather hitting Dover for the third race of NASCAR’s version of the playoffs. Instead, the Illinois native is left wondering about his future, unsure of what 2016 will be like after the team announced Clint Bowyer‘s signing for next season on Friday at Dover.

“We have talked a lot about it, and this is something we [the team] has been working on for several weeks,” Allgaier told Frontstretch Saturday. “We knew that this was something that was a possibility. I don’t think this is by any means closing any doors. It can definitely make things more challenging, but at the same time, I feel like there a lot of positives through all of this. I have been very grateful to have the opportunity to do this.”

With Michael Annett entering the second season of his two-year deal in 2016, keeping Allgaier would mean starting a third car. Annett currently sits 36th in the driver standings, with a best finish of 13th in the Daytona 500.

Bowyer did not rule out the option of bringing over team members from Michael Waltrip Racing, a team which will close its doors following the completion of the season.

Allgaier, 29, made his Sprint Cup Series debut in 2013 at his home track at Chicagoland Speedway, marking one of the first races following Harry Scott Jr.’s purchase of Phoenix Racing. Competing for Rookie of the Year in 2014, he finished 29th in points. Returning in 2015 to the seat of the No. 51 car, he captured his first top-10 finish at Bristol in April, currently sitting 30th in the standings.

I'm sure a lot of you have questions & though I can't answer most of them, here's what I do know…… https://t.co/gZ1DUF7SHX

“It has been a lot of fun, and if it happens again next year, it will be just as much fun,” said Allgaier. “If we are doing something different, then we will have equally as much fun. We are definitely exploring all of our options for 2016. I think that for us, we are working hard to make anything possible happen. I think at this point, it is just a matter of finding that right fit, whatever that may be.

“With Clint making the announcement that he is going to go race the No. 14 in two years, that opens up a relationship with Stewart-Haas Racing that really is invaluable. As far as equipment and everything like that goes, it is obviously a great relationship.”

Allgaier stated that there have been on-going discussions with HScott Motorsports about returning next year. His longtime sponsor, Brandt, will likely follow him if he were to race for another team in 2016. Other options include not completely closing the door on returning to the Xfinity Series, where he could possibly contend for a championship if teamed up with a top-tier organization. In 174 career NXS starts, he has three victories and has not raced in the division since 2013.

Said Allgaier: “If I end up back there, it will definitely be a big plus. If not, I wish all of these guys the best, too. We started this racing team two years ago, and it has been a lot of fun being there and I definitely want to see it keep growing into the team that they want it to be.

“Everything is circumstantial. That is the great thing about this sport – there are a lot of moving parts to all of it. I think that I need to make sure at the time, I will be making the right decision.”

According to Allgaier, there is no time range to have an announcement. He expects to have a deal signed by the offseason, but as long as he has a home before Daytona in February, he believes things will work out just fine.

“These guys that are on the [No.] 51 team have been awesome,” he exclaimed. “I know they have given me 100% all year, and I know they are going to do so for the final races this year. You can’t let everything that is going on get in the way of finishing out the season. They are going to get my all, and when the season is over, we’ll figure out what 2016 will be like.”