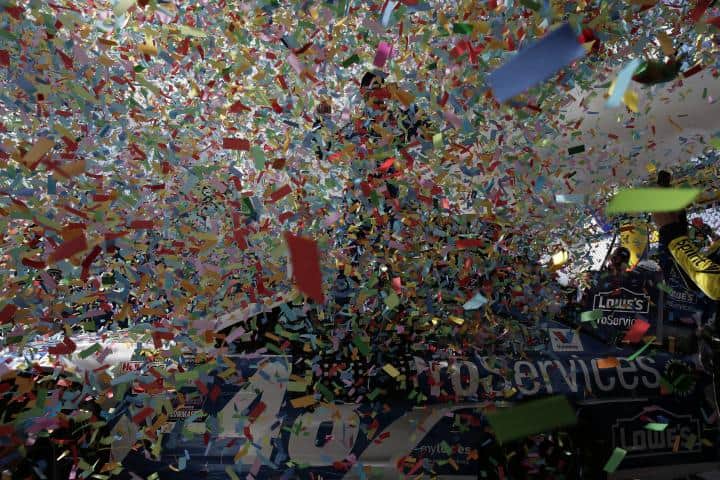 Rain, rain, go away, I don’t want to have to race on Monday. That is the mantra that I am chanting right now as I watch the second practice session on the TV. This week has throw a bit of a kink into the Fantasy game as the team had to use their points position as a basis for qualifying when all activities were rained out on Friday. The teams have been on the track today and that information has been vital for Fantasy forecasting, as last time the drivers were here the Joe Gibbs Racing team had yet to hit its hot streak.

When I think of Dover, I think of Jimmie Johnson, who has 10 wins here. When it comes to a fantasy team it is hard not to include Jimmie at Dover. Other drivers I’m been looking at are Kevin Harvick, who needs a win to transfer to the next round of the chase, and all four JGR guys. I have been curious to see if their late season speed would carry over at Dover and to be honest it looks like a hit and miss for them so far. The JGR guys have a big advantage as they start first, second and third and I imagine that their goal for this race is to not let Kevin Harvick win. Last week Harvick ran out of fuel with three laps to go, and Matt Kenseth was an instrumental part of that pushing Kevin not letting him save fuel.

No. 4 Kevin Harvick $28.50
Kevin flat out dominated last week at New Hampshire, but as always is the case in NASCAR the lap that matters is the last lap. Kevin ran out of go juice with three laps to go and ended up 21st. I expect Kevin to dominate again this week and anything less than that for this team could spell disaster in their Chase hopes.

No. 20 Matt Kenseth $27.25
Kenseth seems to always be a quiet threat. His car did not show some of the speed that his teammates did in the practice but I think the track is going to go through a big swing once rubber gets laid down and I expect the No. 20 car to be in contention. Kenseth starts on the pole and should lead a few laps at the start of the race and that should help with any positions he might lose.

No. 48 Jimmie Johnson $26.00
Johnson is Mr. Dover. Having Jimmie on your fantasy team here is pretty much required. In the last 10 races here at Dover Johnson has led 2,999 laps… 2,999… one more time, 2,999 laps. Johnson’s car looked good in practice and he starts in the fifth position. Look for Johnson to lead several laps until Harvick gets up there and runs him down.

No. 17 Ricky Stenhouse Jr $11.75
I almost never take Ricky Stenhouse Jr. Actually, this may be the first time that I have picked him in NASCAR Fantasy Live this year. I like the speed that Stenhouse has shown so far in practice, and I also like his starting spot of 27th. I look for Stenhouse to move through the field and have a top-15 finish this week.

No. 46 Michael Annett $5.50
Michael Annett starts 38th this week and he showed speed that was better than that in practice. To be honest that’s about the best I can say for a back-of-the-pack starter here at Dover. Lets hope Annett stays out of trouble and can move up through the field a bit.

Race winner: Kevin Harvick
I think he has the fastest car again this week and should be the favorite to win.

I always love seeing this picture, despite who is in V-Lane. :)