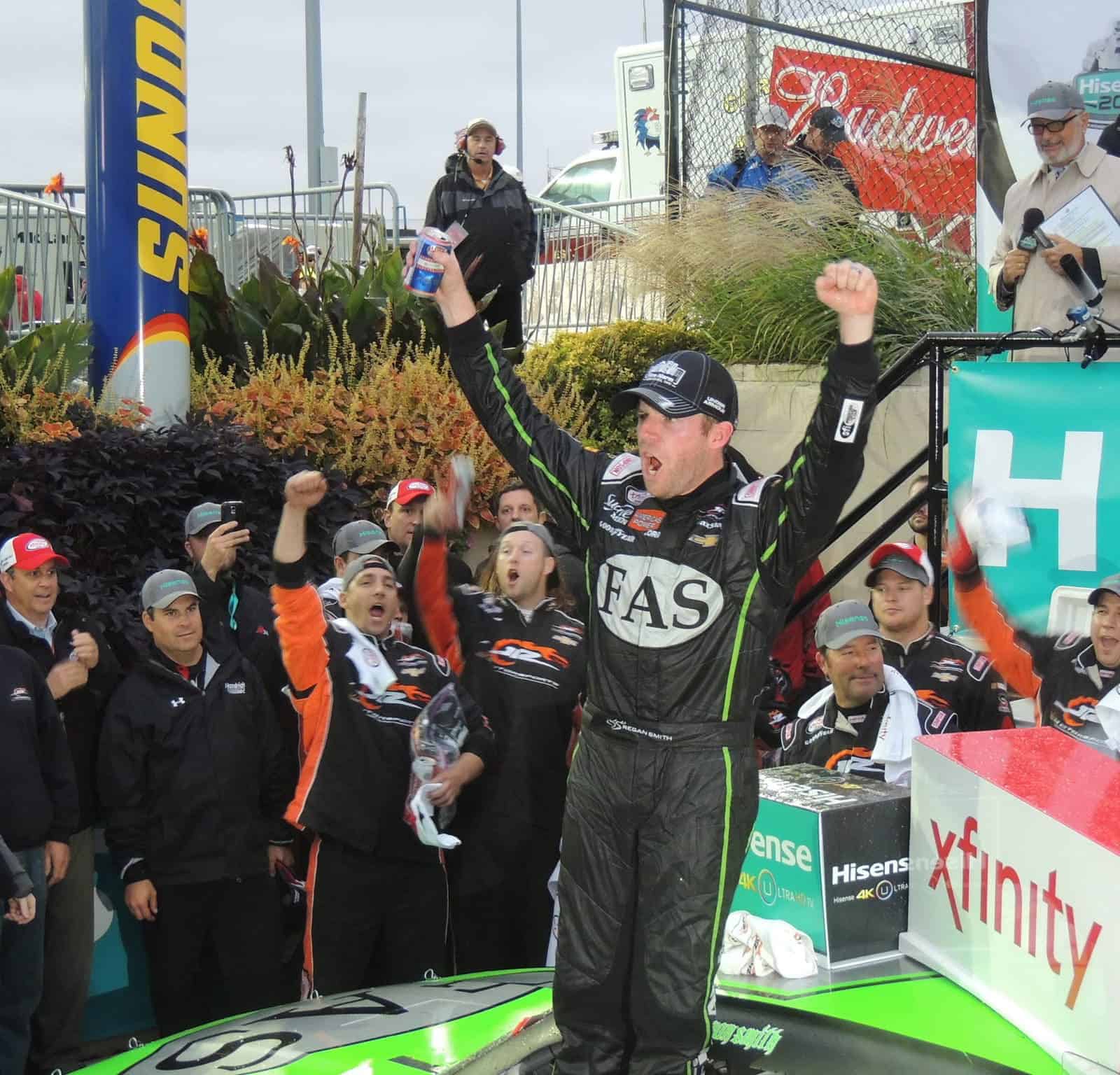 Sometimes, it all just comes together.

When Elliott Sadler took two tires for the final restart on lap 118, a chance was taken as rain dropped seconds later, freezing the field under red flag.

When the 30-minute red flag was lifted, however, Regan Smith pushed Sadler clear of the field and passed him eight laps later to take the win at Dover International Speedway – all while saving fuel.

The Hisense 200 win is the second of Smith’s 2015 season and sixth of his Xfinity Series career.

“A fast pit stop got us out in fourth,” said Smith, who outpaced two full-time Sprint Cup Series regulars to get the win. “That was kind of the key moment – restarting in fourth. My plan was just try to clear the [No.] 54 and hope that when the [Nos.] 20 and the 1 got battling, I could get by the 1 and see if I could keep up with him. He spun his tires, did what ever he did, and I was able to be right on the [No.] 1’s bumper. I thought I was going to pass him going into turn 1, but I had to get back in line to make sure I didn’t mess up the restart.”

With fuel becoming a growing concern in the final 25 laps, Smith focused on the job at hand.

“I kept looking in the mirror a couple times, and finally said, ‘Hell, I’m just not going to look in the mirror anymore because [Hamlin] is not really catching me,’’ said Smith.

With colorful confidence, Smith says this is his best year at JR Motorsports since joining full-time in 2013.

“I can say this with certainty: This has been my best year at JR Motorsports as a driver,” Smith said.

Denny Hamlin finished 0.703 seconds behind in second after a fierce battle with teammate Kyle Busch in the closing stages.

The Monster Mile was sure ready to shake up the championship fight Saturday afternoon.

Smith’s victory, continuing a run of eight straight top-10 finishes, advanced him to third in the points, 36 behind Chris Buescher.

Championship runner-up Ty Dillon cut a right-front tire on a lap 25 yellow, sending his No. 3 Richard Childress Racing Chevrolet to the garage, finishing 28th, 75 laps down.

“I saw the caution come out, it wasn’t for us, it was somebody else,” Dillon explained. “All of a sudden it [the right-front tire] popped and it hit the wall pretty hard.”

Dillon ends a run of three consecutive top 10s at Dover, dropping from second to fourth in points.

”I hate it for these guys,” said Dillon. “We’ve done an awesome job, battled back all year. Our cars are super fast. We’re going to win one of these things. I just hate that this has to happen.”

Ryan Blaney was unable to catch the top-three runners and finished fourth in his No. 22 Ford. Kyle Larson, Austin Dillon, Elliott, Buescher, Sadler and Daniel Suarez completed the top 10.

Buescher continues to hold the championship lead, with a 24-point margin over Elliott.