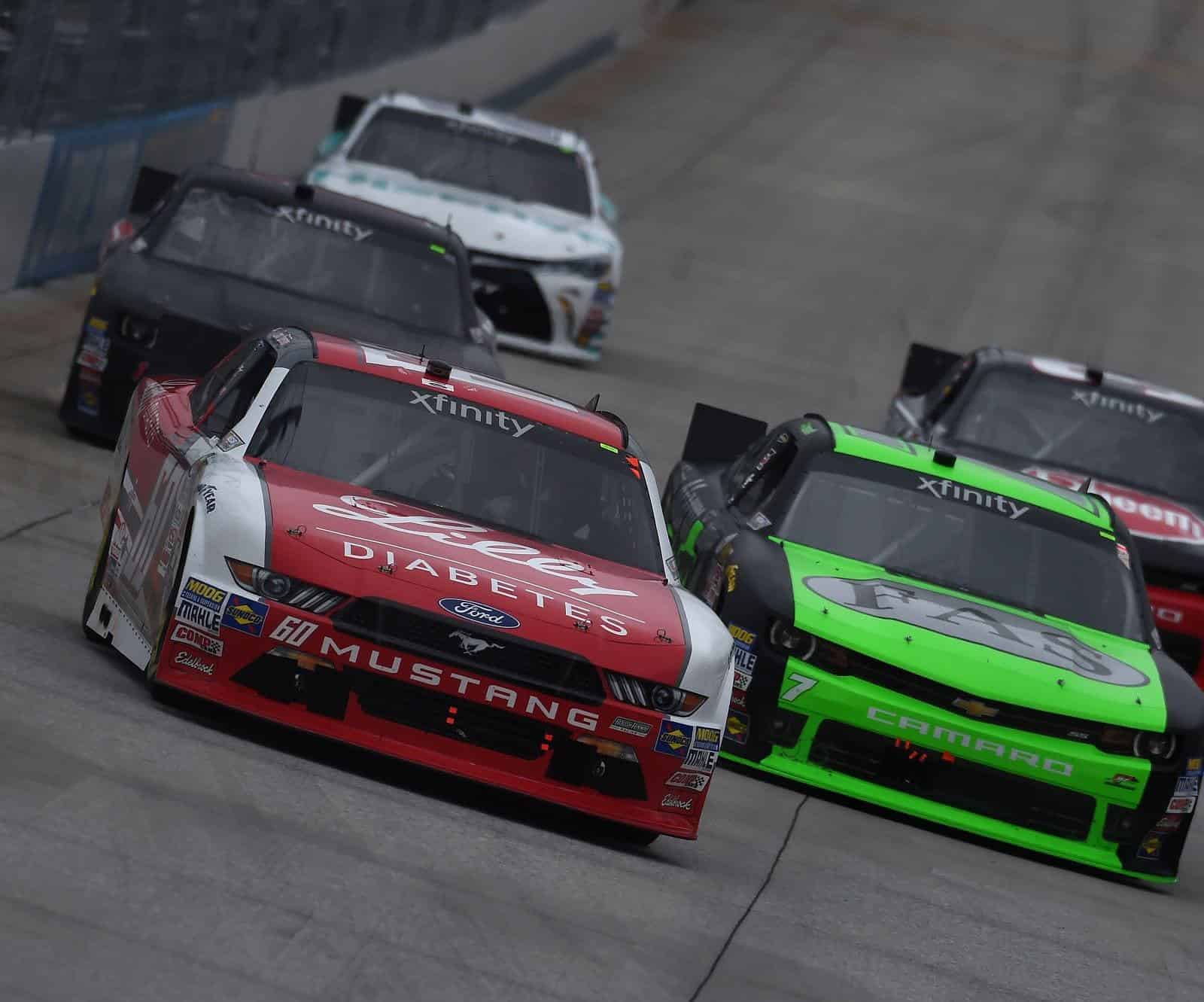 The rain played some games with the NASCAR Xfinity Series at Dover International Speedway on Saturday. High winds amidst a wet track highlight the Hisense 200. But when it was all said and done, Regan Smith went to Victory Lane for the second time this year.

Taking advantage of a red flag due to rain on lap 114, Smith took two tires, restarting fourth in the No. 7 car. After driving into the top 10 following the second caution of the race on lap 23, where he was positioned outside of the top 20 for an extra pit stop, he diligently made his way into the top five. Prior to the red flag, he had been clocking top-five lap times, but was several seconds behind leader Kyle Busch.

Busch dominated the 200-mile race on Saturday, leading 110 of the first 114 laps. But when the caution came out for rain, he took four tires, restarting third. He was never able to recapture the lead from Smith, who set the pace for the final 80 laps. With a hard-charging Denny Hamlin just behind Smith, the two battled intensely until the No. 7 car stretched out the lead to over a half-second margin in the final 10 laps.

Securing his first victory at a non-plate track or a road course since Michigan in June 2013, Smith now has six triumphs on his NXS resume. JR Motorsports now has five wins on the season, coming off a year in which the team had nine victories.

For the first time since 1997, the NXS raced without a single practice session on the track. A nor’easter plagued Dover for all of Friday, canceling all on-track activity and qualifying on Saturday morning.

Smith‘s victory is a major one for the No. 7 team. In the midst of a championship battle, he gained 11 points on Buescher, who finished eighth at Dover. In what was one of Smith’s worst tracks entering this year, he completely changed his luck in 2015. He ended the first race at the 1-mile oval in third, followed by his victory on Saturday. When he took the lead, it was the first time he had led any laps at Dover.

But now, the focus continues on the future for Smith. He is currently a free agent, stating “everything is on the table.” JRM signed Sadler to a deal to replace Elliott next year, but there has been no word of what will happen with the No. 7 team moving forward. With another win added to his resume, he now provides extra support if need be if he does not return to the organization in 2016.

The weather was absolutely abysmal on Saturday. Wind gusts reaching upwards of 30-plus mph created harsh on-track conditions. Rookie Ben Rhodes wrecked on lap 16, slamming the inside wall on the frontstretch. However, with rain hitting the speedway just past the halfway point, the tires wore off rapidly, tossing teams a curveball for the latter stages of the race.

It was a brutal day for Richard Childress Racing. Dillon sailed into the wall early on, being sent straight to the garage in the No. 3 car and evidently finishing 28th. Entering Saturday’s race 19 points behind Buescher for the points lead in the runner-up position, he will head to Charlotte 39 points back.

Scott, who had jumped as high as sixth in the championship standings after Richmond, finished 31st after his car had a flat tire. While on pit road, the No. 2 car erupted in flames, giving him his third straight finish of 13th or worse.

Underdog Performers of the Race

JJ Yeley had an impressive day in the No. 28 car for JGL Racing, running inside of the top five after taking advantage of the early set of cautions. Earning his second straight top-15 finish, he ended the day in 12th, a solid performance for the small organization.

Until running out of fuel with three laps to go, Ryan Sieg was competing for a top-10 finish. The No. 39 car had run as high as ninth during the 200-mile contest, performing rather well for the family-owned organization. Finishing 17th, he moved up to 13th in the championship standings.

Six drivers in the Hisense 200 are scheduled to race in the Cup race on Sunday afternoon. Among those performing double duty were Kyle Larson, Landon Cassill, Busch, Austin Dillon, Yeley and Hamlin.

Saturday’s race provided an unexpected amount of passing for the NXS. Combining the wet weather and a lack of on-track time, teams were scattering for ideas of how to approach the event.

Dillon’s misfortune might have been the break that Buescher was looking for. The No. 3 team had been inching in on the championship lead, but sitting nearly a full race behind Buescher, the chances are slim to none for the Dillon to win the title. However, Smith is closing the gap, as is teammate Elliott, who are each within striking distance if Buescher makes a mistake in any of the final five events.

The race also marked the third out of the last four contests where a Cup regular did not score the victory. With a chunk of fans being fed up of seeing Busch, Hamlin, Brad Keselowski and the other Cup stars dominating the events in the sport’s second-tier division, it provided a fresh face in Victory Lane, one that has spiced up the championship battle.

Regan Smith: “They’re all big, but when you don’t know what your job is next year, it’s huge. I guess that won’t hurt for solidifying my job status. We’re working hard on a lot of things. I’ll worry about that on Monday, Tuesday and Wednesday. Tonight, I’m going to drink a lot of Dale’s Pale Ale and I’m going to have a headache tomorrow, not going to lie.”

Chris Buescher: “We’re not comfortable and we’re not going to be until Homestead is over. It is not a bad day for our Mustang. We could just never get a restart on the outside, which costed us a few positions I think. There at the end, our long-run stuff was pretty decent. I just wish we could have had a little more.

“They [Elliott and Smith] are both going to be there, and Ty is going to be there. These guys have been around us all year and they have all been competitive. We’re going to have to race them all and it’s all a matter of how these races will play out.”

“It seems like every single race I have been going to the back and going up front, which I’m optimistic about because I’m learning how to pass cars. They may be slower cars, but as I work my way to the front, I see the progression. It’s cool to see that and learning how to work the air, but I really want to race out front with the best of the best to see what they are made  of and learn as much as I can from them. They are the ones that do it right and get speed out of their cars.

“The second half of the race was actually a huge challenge for me because when the rubber got washed off the track, I saw other competitors working their way to the top, trying to get some clean air. It ruined my tires, corded them. They were ready to about pop on me at the end.”

How much more exciting it is to watch a race where the ‘regular’ Xfinity drivers outrun the Cup interlopers. Wish they would stay in their own division! Congrats to Regan!