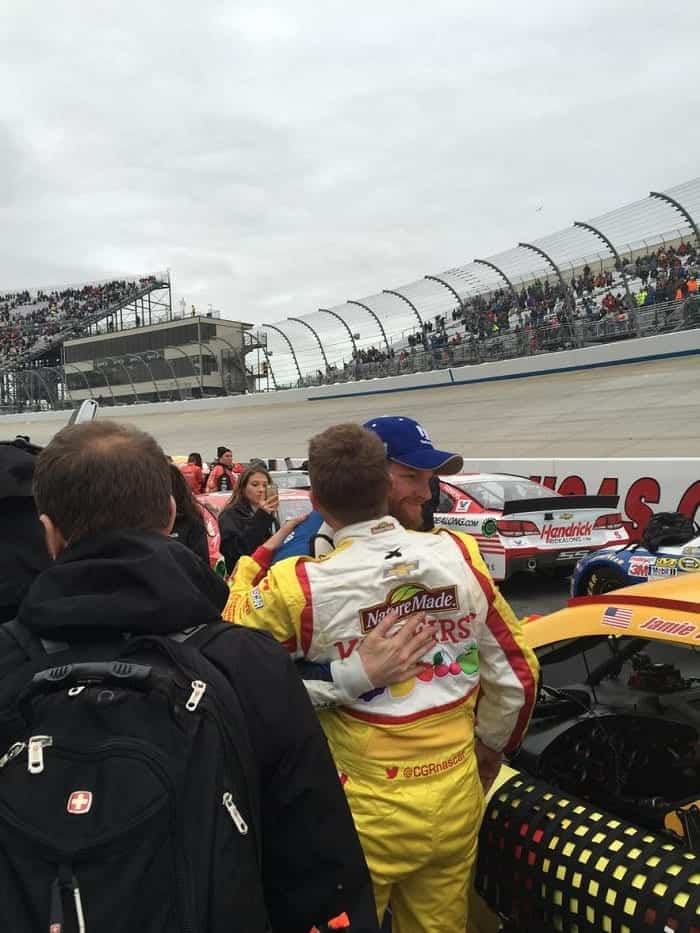 Battling door-to-door on the final restart, a pair of friends battled for the final spot for the Chase for the Sprint Cup cutoff. Attempting to tame Dover International Speedway, an intense duel for the third position during the final 24 laps created a mixture of emotions for two men who have raced against each other since 2002 in stock car racing’s premier division.

Jamie McMurray walked away with a smile on Sunday afternoon following the AAA 400 at Dover. The cool, windy atmosphere had his hair flowing as he stepped out of his No. 1 Chevrolet, taking a deep breath after earning his third top five of the year. However, as he awaited the questions of approximately a dozen reporters, a man in blue hugged him.

Dale Earnhardt Jr., a close friend of McMurray, edged out the 39-year-old for the final spot in the Contender Round. The two had a fierce battle at the end of the 400-mile contest. Throughout the day, they were within five points of each other in the championship standings. For a while, it appeared as if neither of them would advance to the second round. However, with Jimmie Johnson experiencing a major mechanical failure before the halfway mark of the event, it opened a door for the two drivers.

“I’m not disappointed,” McMurray told a group of reporters following the race. “Our goal from the beginning was to make the Chase. Our team did a tremendous job today, but we just didn’t run well in the first two races. With 80 to go, they told me I had to get by the [No.] 88, and we came in for our pit stop and beat them out of the pits.

Kevin Harvick, who entered the race with a 23-point deficit, had to win Sunday’s race in order to advance to the next round of the Chase. Dominating the day, leading 355 of 400 laps, he claimed his third victory of the year. It was the first time in his career he has led over 300 laps in an event. But with his victory, it took away a position for McMurray to grab, one that he was going to have until Earnhardt passed him with approximately 20 laps to go.

“The ironic thing is the [Nos.] 4, 18 and 88 were the ones that I was racing to get in and they were the three ahead of me,” McMurray said. “It was a great battle. We just didn’t have a good car in the first two races. My car wasn’t that good on the outside and I didn’t expect anyone else’s to be that good. I knew I was better than him the run before, so I didn’t expect it.”

As for Earnhardt, he makes it past the first round for the second consecutive season. He finished 20th or worse in each of the three events in the Contender Round in 2014, evidently finishing eighth in the championship standings.

This year, Earnhardt has a pair of victories, 12 top fives and 17 top 10s as he looks to battle for the championship. After finishing 25th at Loudon, he held the 12th and final spot to transfer into the next round of the Chase.

“We ran really well at Richmond, New Hampshire and here,” Earnhardt said in a post-race press conference. “I feel like we’ve got pretty good speed. We lost a little speed over the summer, and I think we’re gaining a little bit on it. We’ve still got some more to mind, but we’ll see how these next few tracks stack up. We’ve just got to get a little bit of luck and not ruin it for ourselves.”

As for McMurray, the focus will turn over to the final seven races of the season. His Chip Ganassi Racing with Felix Sabates teammate Kyle Larson finished in top 10, several positions behind the No. 1 car. Since Darlington, the pair has finished within four positions of each other at each race with the exception of Chicagoland, showing the team’s potential to have two cars in the Chase for next year.

Said McMurray: “Finishing fifth in points is what we want to do. If we can run like this, we’ll have a realistic shot at doing that. It was a solid day for us. We just didn’t run well enough at Chicago and Loudon. Fortunately, we brought a little bit of a different car here and we learned something. We’ll move on to Charlotte; that’s a good track.”