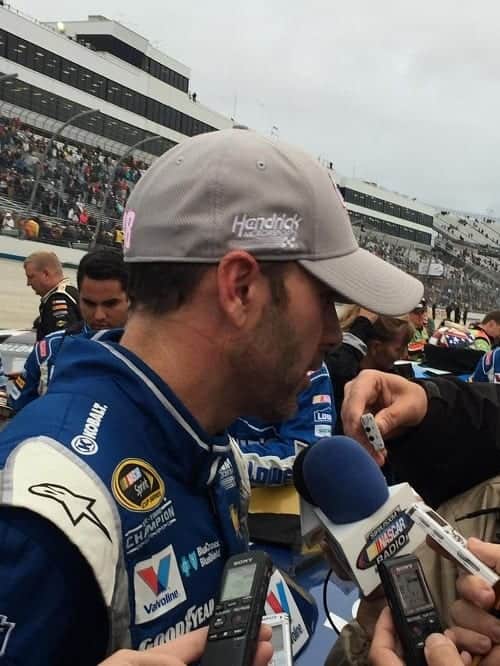 The day began with plenty of energy around the No. 48 car. Photographers circled around Jimmie Johnson, celebrating his 500th career NASCAR Sprint Cup Series start.

However, amidst the gray sky and heavy winds, Johnson’s day went from promising to abysmal.

Returning to his best track – Dover International Speedway – the expectation was for Johnson to compete for the win, especially with a 27-point margin ahead of 12th place in the standings. But suddenly, the luck changed for the six-time Cup Series champion. On lap 104, he took his car to the garage, and eventually, he made the slow journey to the garage.

“You just take things for granted,” Johnson told a group of reporters. “There are so many parts and pieces on these cars, and we take advantage of what they all do. It can’t be more than a $5 part that took us out.”

Johnson experienced a broken rear axle seal on his No. 48 Chevrolet, experiencing an instantaneous discomfort. As he was coming down the frontstretch, his car began to vibrate, he explained.

Johnson finished the day 41st, 36 laps down. Marking only the third time in his 28 starts at Dover that he has finished outside of the top 20, he failed to advance to the Contender Round of the Chase, ending the day 12 points behind Hendrick Motorsports teammate Dale Earnhardt Jr.

“The right-rear hub started ceasing up because the fluid was out of it,” Johnson said. “It was just metal on metal and started shaking violently. Once you are behind the wall and are more than one or two [laps] down, it is out of your hands. Chad (Knaus, crew chief) updated me a couple of times about what needed to happen, and we needed a few big pile-ups to get back into this thing and I just didn’t see that happening.”

Thanks everyone, we will race hard and finish out the season strong.

For Johnson, it marks the second consecutive year that he has been eliminated before the final two rounds of the Chase. Last season, he finished 17th or worse in each of the three events in the Contender Round, finishing a career-worst 11th in the championship standings.

The team will now shift its focus to the final seven races of the season, something they had hoped would not happen. Johnson leaves Dover with four victories, 11 top fives and 18 top 10s on the year. For a team that strives on consistency, they have finished 35th or worse five times this year (Las Vegas, Martinsville, Charlotte, Michigan in August and now Dover).

“I didn’t really have anything to fight for,” Johnson said. “It was completely out of my control. Within 20 to 30 minutes of being back on the track, I could see the flow of the race. I felt like we were in big trouble. I know it’s a delicate piece and obviously, it is a very important piece. I don’t think it is due to anything on the track. It is in a seal; it’s inside the hub.

“We pride ourselves on no mechanical issues. Stuff doesn’t fall off our racecars. Our cars don’t break. This one stings for sure.”

…And this is a perfect example (one of many) what is wrong with this format. The guy with the most wins at this point will NOT be allowed in the PT Barnum show at Homestead due to a 5.00 part, something totally out of his control and people with less impressive “stats” advance. This is not a stick and ball sport, a playoff is absurd. Have you ever heard of a stick and ball team be eliminated because of a faulty basketball, etc? My God, somebody please redefine the definition of a NASCAR SPRINT CUP CHAMPION now..please! And I am no fan of Jimmie.

I totally agree. It is total BS that JJ was eliminated from contention over a $5.00 part when he had four wins and a consistent season. I am neither a lover or hater of JJ, but at the same time it could happen to my driver. Something has got to change.

People cheering his demise miss the point entirely about this “playoff” system. This could be your favorite driver at anytime. This is not about being in contention or being good or bad, sick system.