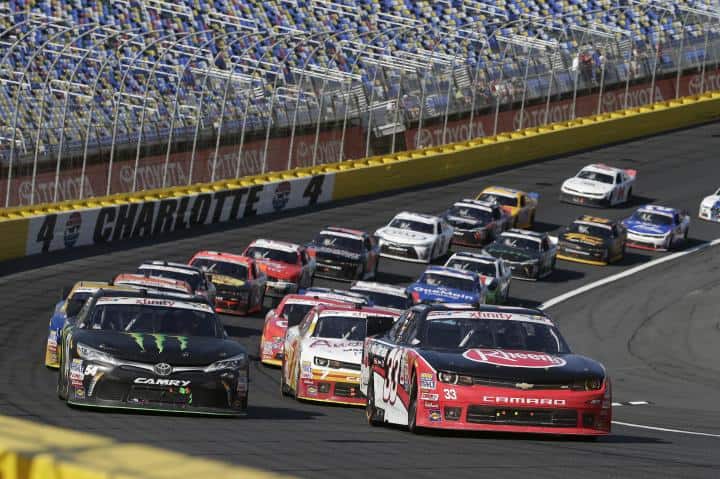 NASCAR released the preliminary entry list for the October 9 Drive for the Cure 300 at Charlotte Motor Speedway. The list includes 40 entrants, meaning each team will make Friday’s race.

Looking to repeat a NASCAR Camping World Truck Series event at the 1.5-mile oval last May, Kasey Kahne will jump behind the wheel of the No. 88 Chevrolet for JR Motorsports. Kahne will join Elliott and Dover victor Regan Smith as the team looks to win back-to-back races.

Kyle Busch will pilot the No. 54 Toyota for Joe Gibbs Racing, with Kyle Busch Motorsports driver Erik Jones driving the No. 20. The two machines finished second and third in Dover, with Busch and Denny Hamlin behind the wheel.

Fresh off of a surprising win in the Truck Series race at Las Vegas, John Wes Townley will return to the NXS to drive the No. 25 for Athenian Motorsports. Brennan Poole will also return to the series, driving the No. 42 for HScott Motorsports with Chip Ganassi Racing after making his NCWTS debut last weekend.

Brad Keselowski will drive the No. 22 Ford for Team Penske, while Ryan Truex will make another start in the No. 98 for Biagi-Denbeste Racing.

The Xfinity Series will return to Charlotte on Thursday for two practice sessions. The field will return on Friday for Coors Light Pole Qualifying at 4:45 p.m. ET, with coverage of the Drive for the Cure 300 beginning at 8 p.m. ET on NBCSN and MRN.