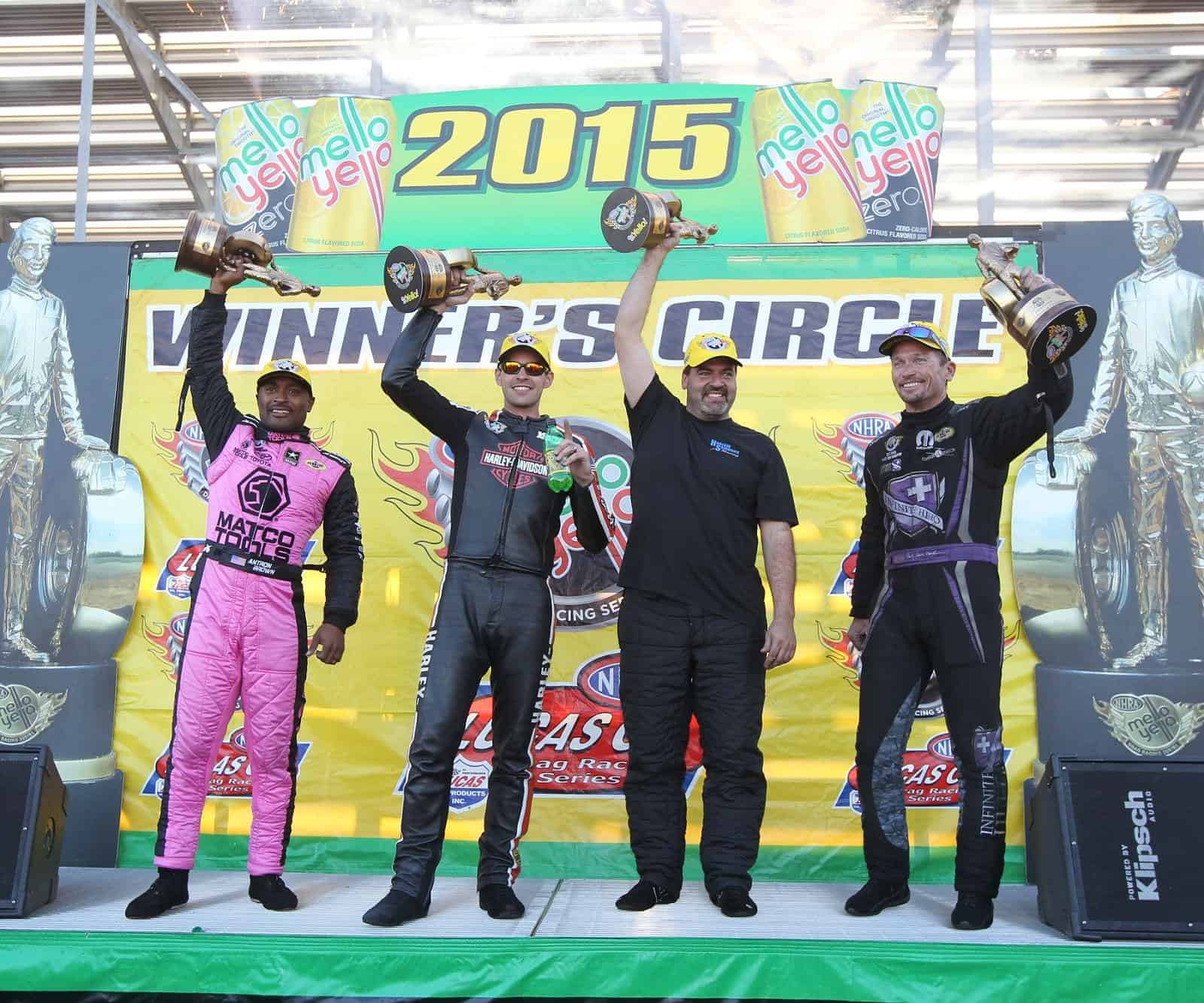 Sprint Cup Series: The Closer is Back in It – Sunday afternoon at Dover International Speedway was simply Kevin Harvick’s day of reckoning. Between the unscheduled stop for fuel with two laps to go last week at New Hampshire to the drop of the green flag at the Monster Mile, the story became ever-so simple for the No. 4 team: win.

Starting 15th, Harvick broke the top five after three green-flag laps and was leading lap 24. From that point on the Stewart-Haas Racing machine was untouchable, holding the top spot for 355 laps in the 400-lap event, the most laps ever led in a single race for both Harvick and SHR in the team’s six-year history.

Additionally, the reigning champion has now been out front for 571 of the last 700 laps ran in the Sprint Cup Series.

Kyle Busch was the next best thing, finishing second.

The brilliant performance by the entire No. 4 team makes many wonder why they were ever doubted. Proven under pressure, nearly unbeatable on the track or off, Harvick and crew chief Rodney Childers are back in the championship hunt. When they will stop their reign of dominance, nobody knows. – Zach Catanzareti

Xfinity Series: Series Regular Smith Comes Out on Top – He couldn’t believe it himself. In a wild day at Dover, Regan Smith edged out Cup regulars Denny Hamlin and Busch for his second victory of the year. His No. 7 car led the final 80 laps, proving that his JR Motorsports team could get the job done at an oval.

However, with an uncertain future, the win is more than just another slap on the resume for Smith. It is another highlight to his NXS career, one that he is hoping to close out at some point to return to the Cup Series.

For Ty Dillon, his championship hopes diminished on Saturday. He hit the wall early in the going, finishing 28th on the day. He fell from runner-up in the standings behind Chris Buescher to fourth, 39 points back. Buescher now holds a comfortable 24-point margin ahead of reigning champion Chase Elliott. – Joseph Wolkin

NHRA: Wild Weekend in Pennsylvania – Crazy was the word for the weekend at the NHRA Keystone Nationals at Maple Grove Raceway in Pennsyvania. Weather washed out all on-track activities on Friday and left racers with just one qualifying session under questionable conditions on Saturday. Sunday’s eliminations saw a second round Top Fuel bye for Brittany Force, with only 14 cars in the field, and a semifinal bye in Funny Car for Chad Head when upset winner John Bojec, who’d suffered a mechanical issue in his round two win, was unable to make the call to the starting line. In Pro Stock, Erica Enders cut a fantastic .004 light and still lost to Bo Butner, who has been running strong lately, on a day when upsets seemed to be the name of the game.

At the end of the day, Antron Brown posted his third consecutive win in Top Fuel, taking out teammate and second-place points man Tony Schumacher. Brown posted a 3.717 second, 328.46 mph run while Schumacher never got off the starting line. Brown continues to extend his points lead in the category, leading by 94 points after three races. He also got by Clay Millican, Dom Lagana and Larry Dixon to reach the finals.

Funny Car ended up being another exercise in speed for Fast Jack Beckman and the “Prock Rocket,” as Beckman ran a 3.910 second, 326.79 mph pass to beat Chad Head’s 3.903-second, 326.16 mph run on a hole shot. This was the quickest Funny Car final in history. Beckman also set a new Funny Car national record for elapsed time of 3.897 in his semifinal win over Ron Capps, earning him an extra 20 points on the weekend.

Going in to the event, Beckman said “Maple Grove might be national-record typeof conditions. We basically put ourselves in a position where we’re going to need to set a record and win the race to get back in this… don’t count us out by a long shot. We’re smart enough to figure this out. We might need a little racing luck to get back on it, but I think we’ll be contending the last day at Pomona.”

Turns out Beckman hit it right on the money. Del Worsham still holds onto the lead in spite of going out in round one, but Beckman has pulled himself up to second, trailing by just 16 points.

Beckman also got by Alexis DeJoria and Tommy Johnson Jr. en route to the finals.

Pro Stock driver Chris McGaha has opened the floodgates when it comes to wins it seems, posting his third of the year by taking down Greg Anderson on a hole shot with a pass of 6.492 seconds, 213.64 mph to Anderson’s faster but losing 6.484 seconds, 214.59 mph. McGaha got by Anderson’s teammate Bo Butner on a hole shot in the semifinals too. He also defeated Val Smeland and Jonathan Gray in earlier rounds.

“This week has been really something. Having a crew chief shuffle and what-have-you, it’s a pretty big feat to overcome,” said McGaha, refering to the departure of crew chief Brian Self for Elite Motorsports earlier this week. “You leave the house hoping you can win and knowing you can win, but actually doing it is another deal.”

Despite the loss in the finals, Anderson closed the gap a little bit on points leader Enders, now trailing her by 72 points going into Dallas.

In Pro Stock Motorcycle, it was Andrew Hines taking down Chip Ellis in the finals with a run of 6.794 seconds, 197.25 mph to Ellis’s 6.818 seconds, 196.39 mph. Both riders made the finals when their opponents turned on the red lights in the semifinals. Hines also beat Chaz Kennedy, Karen Stoffer and Matt Smith in earlier rounds. – Toni Montgomery

Camping World Truck Series: Austin Theriault’s Accident Shines Spotlight on Safety – Saturday night’s Rhino Linings 350 highlighted the need for all impact zones to be covered in SAFER barriers at every single track on the NASCAR circuit. Just 14 laps into the race, contact from teammate Tyler Reddick, who couldn’t right his loose truck, sent Austin Theriault head-on into the outside wall, mere feet beyond where the SAFER barrier ended. After a few tense moments, he was helped from the truck before being loaded onto a back board and airlifted to University Hospital with a 10% compression fracture in his lower back.

But the question is: why in the world was there not a SAFER barrier at that spot?

I know SAFER barriers are expensive; after all, aren’t many safety developments costly? But can you really put a price on a human life? While talking a friend about it, he pulled up an article from SBNation a few years back that highlighted the cost of the soft walls at $500 per foot, a price that’s much larger when there’s a high demand like there has been in recent years.

But with that said, it’s time that NASCAR and the tracks become proactive, not reactive. Next time, we may not be so lucky in just having an injured driver after a bad wreck. And if I were a track owner, I wouldn’t want that to weigh heavily on me any more than the current owners do. – Beth Lunkenheimer

Sports Cars: Wait, the Porsche 911 RSR Won Petit Le Mans Overall? – Yes, you read that right. The No. 911 GT-Le Mans class Porsche 911 RSR of Richard Lietz, Patrick Pilet and Nick Tandy claimed overall victory in the Petit Le Mans at Road Atlanta on Saturday (the race was shortened to just under eight hours from the scheduled 10 due to heavy rains). That result came despite the No. 911 failing post-qualifying inspection and having to start at the rear of the field. However, some fans thought the win was tainted, accomplished simply because IMSA wanted extra publicity. While yes, the checkered flag was very unexpected (it came two minutes after FOX Sports 2 left Road Atlanta to cover Camping World Truck Series qualifying and it took nearly everyone by surprise), the fact that the race went on as long as it did was fairly surprising to an equal number of observers.

In reality, the win was not a publicity stunt, but a victory made possible due to the talent behind the wheel, the heavy rains and the fact that the GT-Le Mans class is the only class that doesn’t run Continental tires. Everyone except Team Falken Tire uses Michelins in the class and those rain tires (and intermediates, which are another story all together) were much faster than Continental’s tires. Tandy, who had the final driving stint in the No. 911, ran down the No. 31 Chevrolet Corvette DP Evo driven by Eric Curran from 10 seconds behind, passed him like he was standing still, then drove away from him. Had the race run to the full 10-hour distance, one of the GT-Le Mans entries probably still would have won. Five of the GT-Le Mans entries were on the lead lap at the finish, and the No. 24 BMW Z4 GTE finished second overall. Having said that, the No. 911 was in a league of their own, having moved up from third in class behind the two Corvette Racing C7.R’s to the lead on the final restart, then put 30 seconds on the rest of the class over the next 16 laps.

The result does create some questions, though. With full GT3-spec cars being legal in GT-Daytona next year, the GT-Le Mans cars will be sped up to compensate (at Daytona, the GT-Daytona cars were already faster on the banking this year). Potential rule changes could have to be made to the Prototype and Prototype Challenge classes in order to maintain the assumed class hierarchy as well. Add in the fact that 2016 is a lame duck year for the Prototypes with new P2 regulations set to be put in place for 2017 and you have confusion. Stay tuned. – Phil Allaway