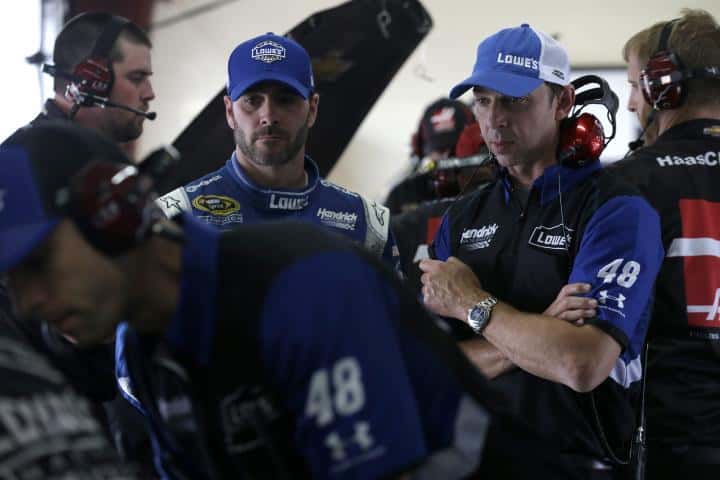 When you’ve watched racing for a while, you know that — sometimes — “it” happens. “It” can be a lot of different things, but the most simplistic definition is an unexpected turn of events that was  unpredictable and indeterminable. “It” tends to happen when we think we know what is going to happen, only for it to turn out much different than we realized.

This last scenario occurred Sunday in Dover. The 12 drivers for the next round in the Chase were far from established. In fact, Kevin Harvick — the defending Sprint Cup Series champion — looked to be in danger of missing the next round altogether. Harvick went on to win the race, of course, but we were all pretty sure we knew who was safe. We knew Matt Kenseth and Denny Hamlin were already going to advance to the next round courtesy of their respective wins. In fact, the top five or six seemed relatively safe given the clinch scenarios. Most of them were able to control their own destiny and, barring a freak accident, were all going to move on with a solid finish.

That’s why no one was worried about Jimmie Johnson. Johnson was sitting fifth, a comfortable 26 points ahead of 12th (the cutoff point for the next round), needing only a top 25 to advance. No one even gave it a second thought that Johnson might not advance. He had 10 previous victories at Dover, including three of the last four races at the Monster Mile. This would be cake for the No. 48 team. There was more discussion surrounding Johnson’s win chances this particular weekend rather than whether or not he would advance.

Johnson went to the garage fairly early in the race for a faulty axle seal, an inexpensive piece of equipment compared to the rest of the car, that ultimately ended  Johnson’s championship chances. They first attempted to fix the issue on pit road, but ultimately decided to go to the garage, opting to replace the entire rear-end assembly. Johnson still lost almost 40 laps and was 43rd when he returned to the track.

He was only able to gain two more positions at the end of the race, finishing ahead of Jeb Burton and Brett Moffitt, who wrecked after Johnson’s trip to the garage area.

“Definitely disappointed,” said Johnson post-race. “It’s tough having a very inexpensive axle seal be the culprit and take your championship hopes away.  It’s racing, I’ve had mechanicals take me out of championships growing up that led to some success for myself and I’m sure helped me with a championship or two. It’s just part of racing. It just shows how critical everything is on a race team. And how important every component is and you can’t take anything for granted. Heartbreaking for sure, but I don’t know what else we can do about it we just have to go on and try to win races and close out the season strong.”

Watching the No. 48 go behind the wall and have Johnson’s name fall below the top 12 in the “points as they run” graphic was a little surreal. Again, it was a foregone conclusion, right? Dover is arguably Johnson’s strongest track and, while they haven’t been the dominant team, the No. 48 has been consistent enough that a top 10 was probably the worst anyone expected of them.

Johnson was working towards a seventh career Sprint Cup Series title, tying a record set by Richard Petty and Dale Earnhardt Sr. I don’t know of anyone who didn’t think he could do it, nor did I see anyone who thought Dover of all places would be the team’s biggest obstacle.

It’s hard to overstate Johnson’s absence from the Chase at this point. I felt like everyone was waiting until the Eliminator round before we really started discussing Johnson’s ability to win a seventh title and who his biggest threat for that would be (coughHarvickcough).

Every week heading into these Chase-or-no-Chase scenarios, a variety of analysts and talking heads hype up all the things that might happen. How often have we heard about all of the things that could go wrong, only for the race to play out exactly the way we thought it would? How often has the excitement, drama and unpredictability of an event or portion of a race been hyped to kingdom come only for the end result to be uneventful and rather predictable?

I felt like this weekend would be just that. All the expected players would still be in, the bottom few who had no chance of winning the title would fall away quietly, and everything would stay relatively normal for now.

Instead, Harvick pulled through with the victory, the 12th and final spot for next round was determined by a late-race battle between Dale Earnhardt Jr. and Jamie McMurray, and arguably the best current active driver in the series right now failed to advance past the first round at one of his best tracks.

I did not watch the race again. I just don’t have it in me, all this “fake” garbage and manufactured excitement from the “booth”. Well I did flip the channel expecting the debacle to be over and WOW, GOSH, GEE-WIZ what a SUPRISE..Harvick in V-lane. Sarcasm intended. And a beat down the rest of the field no less. Lol. Stevie Wonder saw this script being written last week. A fan of the movie Rocky BZF must be! And the horrible Apollo Creed (played by Jimmie Johnson) who some idiots blame for Kevin’s down ward spiral two weeks ago is banished to the hinterland over a 5 dollar part. Yup, the flaws of this horrible format on display today for all to see. And I love the few “ah too bad for Jimmie” without seeing the folly of the man with the most wins eliminated over something that was not due his driving and the lesser advance. Come on…wtf.

And Junior just edging out Jamie Mac, did anybody expect it to be different.

NASCAR truly seems to hate the few fans they have left.

I’m taking a different approach. I didn’t watch most of the regular season and am watching the chase. It’s just like fast forwarding to the last 50 laps of a race. I won’t invest a lot of time in either a race or the season but this chase is a drama filled train wreck. If you only watch the last 50 laps it is highly entertaining and kind of funny that JJ is all the sudden 14th in points.

Oh sorry, Matt Kenseth has the most wins, but if you talk about his two fuel mileage wins and one of those of him being 4th..well…call Jimmie the most wins..really isn’t a stretch… :) Absurd format. Ryan Newman again, no wins..does he have a top 5, a pole,a top 10, a lap led that wasn’t by attrition(leaders pitting) is in it, and Jimmie isn’t. Well I think they should rename the Sprint Cup Champ to a one race Champ. And I do believe Jimmie has a win or two in him left and Ryan does not and will not. And I am no fan of either, as you all know.

Rumor from reliable sources within Lowes (the two guys in lumber at my local store), are that Lowes will be released immediately from sponsoring JJ/HMS for breach of performance clause in their contract. They said that if Jimmie can’t even end the year in the top ten, they want their money to go with a higher performing team such as Newman/RCR.

To me few things recently have been as predictable as Harvick winning yesterday. So on a rainy Sunday afternoon, I turned the race on and before they even had the “competition caution” it was already resembling a parade, I turned it off.
Maybe it got interesting later but I wasn’t going to hang around and wait for it. Found other more positive things to do.

I agree with both kb’s and Russ’ comments.

Still, I can’t help but point out that it looks like “the golden horseshoe” has finally fallen out.