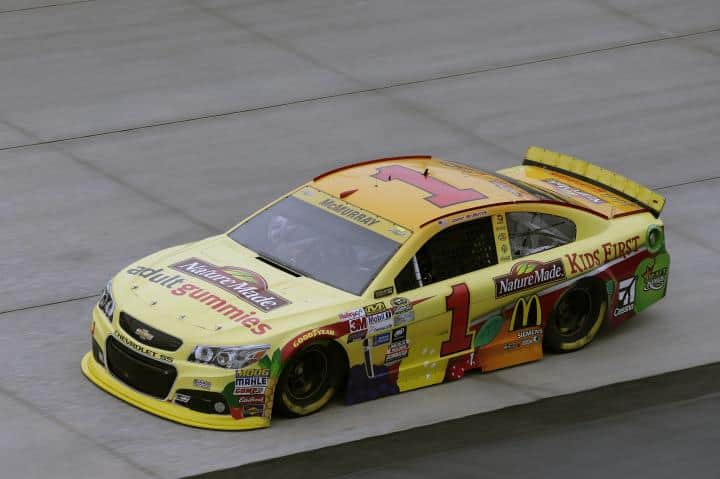 When the champion driver hoists the wavy silver trophy above his head and the glitter cannon goes crazy at the conclusion to the Sprint Cup race at Homestead-Miami Speedway; if that wheelman is Kevin Harvick, the other three protagonists in the final four will rue the race at Dover International Speedway this past weekend. Let’s not forget, either, that Harvick needed a win in race number nine at Phoenix International Raceway – the penultimate race of the 2014 campaign – just to make the final four on the way to his maiden championship. So as they would say over the pond in my native home of England, “he’s got previous.” All told, Harvick led an incredible 355 of the 400 laps at Dover and didn’t look in trouble all afternoon long – a remarkable effort by a champion driver under immense pressure. This was Harvick’s first win since races three and four of the year, at Las Vegas Motor Speedway and Phoenix respectively, but you sense he’s not done with Victory Lane yet this year. “That was a guy that we wanted to knock out, you know, that’s a guy that can win all these races, and you don’t want to have to compete against a guy like that,” said Kyle Busch in a post-race NASCAR interview. And that’s a sentiment the other eleven drivers still alive in the 2015 iteration of the playoffs would do well to note.

TWO: On to the Contender Round

I’ll be straight up honest here: I had no idea what this second of four playoff rounds was called until I looked it up. So, folks, welcome to the Contender Round where 12 drivers battle for eight places in the third “Eliminator” round. And yes, I had to look that one up as well. Perhaps in time these round names will roll off the tongue (or keyboard to be more accurate). First up, we head back to the spiritual home of NASCAR, Charlotte N.C., for a third trip of the season and 500 miles at Charlotte Motor Speedway under the lights this Saturday night. Then we’re off to another mile-and-a-half venue and a second visit of the year to Kansas Speedway, before we finish up with a true wild card on the perilously high banks of Talladega Superspeedway. As a trio of tracks, the second round of NASCAR’s new playoff format will provide a slew of fresh challenges with both a day and a night race at a cookie-cutter circuit followed by 500 miles of white knuckle, 200 mph tension at a track where championship dreams can be crushed in the blink of an eye. The real question is who will remain standing after we’ve finished up the race at Talladega? Given the way things are going so far this year, it might very well not be the eight you suspect, either.

And since I’m on that topic, hands up who else was surprised not to see Jimmie Johnson progress further than the final 16? Sure, his Hendrick Motorsports team has not had the speed of Joe Gibbs Racing or Team Penske in the past few months but how many seriously didn’t think he would make a deeper run in the playoffs. Compounding Johnson’s misery it was a milestone 500th career start at a track at which he has dominated: Let’s not forget Johnson has won an incredible 10 times at the Monster Mile throughout his career. Johnson finished in 11th place overall last season – having never previously finished lower than sixth place – so this season will statistically speaking be his worst ever Cup finish. “I’ve had mechanicals take me out of championships and it’s just part of racing,” said Johnson in a pit road post-race interview. “It shows how critical everything is on a race team and how important every component is. You can’t take anything for granted… It definitely hurts.” Johnson will be back at it again, running for a record-equaling seventh title next year, and you can’t help but feel his time will come. It just won’t be in 2015.

FOUR: So close for McMurray

In the end an average finish of 11.3 was not enough to see first time Chase participant Jamie McMurray make it through to the round of 12. And just like Johnson, McMurray’s focus will now turn to 2016 and what he hopes will be another and more sustained run into the playoffs. McMurray finished 16th at Chicagoland Speedway and 14th at New Hampshire Motor Speedway so you would think that a fourth-place run at Dover International Speedway would be enough but sadly for the amiable veteran it was one point too few. McMurray finished up the Challenger round level on points with Dale Earnhardt Jr., who ended up snagging the last transfer spot on the basis of his third-place finish (the highest overall between the two drivers) at Dover. Making matters worse, Earnhardt Jr. passed McMurray for position on the track during the final restart and that in the end was enough. “[Earnhardt] did a tremendous job of getting around me on the outside,” said McMurray in a post-race interview. “When I got around Matt on the restart, I was waving frantically, hoping he (Matt Kenseth) would let me in — and I got down in front of him…. I never expected the [No.] 88 to be able to get by me on the outside. He just did a really good job, and once he got in front of me, it’s just hard to pass.” And that, as they say, was that.

And finally this week, a quick shout out to the much-maligned John Wes Townley who won his first ever Camping World Truck Series victory at the 87th time of asking. “These guys did an awesome job with this thing,” said Townley in Victory Lane. “It’s been awesome this year. We just stayed up there all day, and I took care of this thing and it took care of me.” And after a raft of criticism over the years, I have to say it’s good to see him finally make the breakthrough. Nice work, JWT!

The Chase has become the flea in the underwear that distracts the fan to the point where he just can’t relax and enjoy the event. Chase, Chase, Chase, an irritant, nothing more.