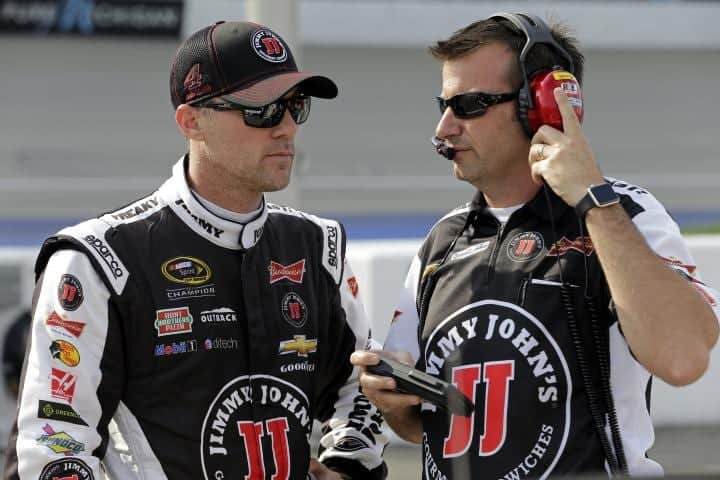 Kevin Harvick’s victory at the Monster Mile Sunday took the reigning champ off the ropes. Down for the count after an awful two-race start to the Chase, an ugly wreck combined with running out of gas the only option for the No. 4 car was simple: win. Without the victory, Harvick’s point total would have left him nearly 20 points short of advancing into the round of 12. Sunday’s response to adversity, a dominant performance in which Harvick led 355 of 400 laps was a remarkable display for a team that’s now won three times when facing possible Chase elimination.

The first came at Phoenix last November, lifting the No. 4 car into the “Final Four” after a disastrous 33rd-place finish at Martinsville. Then, the following Sunday Harvick came through at the Homestead finale, withstanding a challenge from winless Ryan Newman to take the title in his first season running for Stewart-Haas Racing. The Dover triumph, without question was his most impressive; Harvick had never won at the Monster Mile prior to Sunday and was coming off two wins stripped away by factors outside his control. Weaker, non-cohesive teams would have wilted under the pressure.

Instead, Harvick rose above, piecing together his remarkable 18th top-four result in 29 races. That means 62% of the time this season he’s been able to run fourth or better, an absurd statistic in an era of parity amongst NASCAR’s top teams. Other than Joey Logano (13 for 29) no other driver is even close; his laps-led total (2,031) is more than double that of the second-place man on the list. Harvick now faces a run to the championship that includes a track (Phoenix) where he’s won four straight times and been virtually untouchable for over two years. Another one, Charlotte, in this next three-race stretch is a place where Harvick won last fall and led 26 laps during the Coca-Cola 600 Memorial Day Weekend before fading to ninth.

That puts Harvick in the unenviable position of favorite just one week after being left for dead. He’s the big beneficiary of a more forgiving Chase that allows contenders like him a “mulligan” if they’re able to bounce back from disastrous mistakes with a win the following week. For NASCAR, losing Harvick would have been disastrous as they try and transition into their new playoff format; the sport’s best driver throughout the season would have joined four-time winner Jimmie Johnson on the sidelines while winless rival Jamie McMurray, running his first Chase would have snuck through.

NASCAR will take that any day despite Harvick being in a class all his own. The run to victory wasn’t exactly heart-stopping television; the No. 4 car could have lapped the field under the right circumstances. The only difference was this week, unlike Loudon the week before and so many races this year Harvick’s team figured out how not to beat themselves. It’s a rare level of excellence few drivers in our sport will reach, let alone for two seasons straight.

With Johnson’s elimination you have to wonder if a changing of the guard is fully at hand. Yes, Harvick is the same age as Johnson (40) but has a second lease on life with his opportunity at SHR. During this stretch, he’s led more combined laps than anyone since Johnson in 2008-09… and Harvick is closing the gap (4,187 to 4,168). Next up on the list is Jeff Gordon, leading 4,924 laps in 1995-96 in a two-year stretch that launched him over Dale Earnhardt as the most successful driver on tour.

Harvick, as I’ve mentioned before still trails these dynasty-like comparisons in one important statistic: the win column. He’s tallied eight victories since the start of 2014 but that’s less than half Gordon and Johnson accumulated during their own dominant two-year stretches. A driver that’s known to close the deal has suffered from too many self-induced mistakes; crew chief Rodney Childers, brilliant with setups under the current rules packages has a support system making too many mistakes. Whether it’s loose lugnuts, bad tire strategy or not enough fuel the list of “would haves, could haves, and should haves” is far too long for a driver of Harvick’s caliber. Getting cut from the Chase this early would have been one of the sport’s massive failures, the equivalent to a 1 seed getting ousted by a 16 in college basketball’s NCAA Tournament (here’s a clue for those who don’t follow that sport: it’s never happened).

Yet the smoke has cleared and the No. 4 team remains squarely above the rubble. Within an organization that has two cars, Tony Stewart and Danica Patrick, simply struggling to run top 20 each week, Harvick’s disappointed if he runs outside the top two. At some point, both racing historians and other competitors need to take stock of what’s unfolding, a run of success that’s turning Harvick from a great driver into a future Hall of Famer. Fans may not have noticed, NASCAR ratings and relevance continuing to decline which is a shame considering Harvick’s outspokenness and engaging personality. His side business helps market UFC-type fighters, pranks with business manager Josh Jones light Twitter abuzz and wife DeLana is one of the most recognizable off-track figures inside the garage. The pieces are there for a surge in popularity but for whatever reason, whether it’s age, boredom through dominance or this current rule package fans have been slow to embrace this reality.

Of course, there still needs to be follow through for Harvick; a second straight title is not a “gimme.” Yet you got the sense after Sunday this championship is once again playing into Harvick’s hands, a slow march to the Homestead promised land where he’s won before. No wonder the Joe Gibbs Racing foursome, led by Matt Kenseth on old tires late, tried so hard to wipe their rival off the map at the Monster Mile. Indeed, Kenseth running hard in the final laps the week before may have run Harvick out of fuel; a knockout punch would have been Kenseth staying out front during one of Dover’s frantic final restarts.

Unfortunately for him, though Harvick’s car would not be denied. It’s a level of resilience that may soon be rewarded with a championship and a potential dynasty in the making.

what?
a guy who’s never run well at dover?
runs away at jimmies house?
and jimmie goes down in flames?
i believe a cry of foul is in order.
how many times can you play me for a fool?
and i’m no jj fan.
(for the record, i may be an “anyone but harvick” former fan)
bah.. no matter…
i’m betting that nascar sees to helping gordon winning this year.
it might generate a little interest for them.
he’ll have to screw up mightily no to.
but maybe… just maybe newman will play the odds again… maybe he’ll…
what am i thinking?… this is the new irrelevant nascar at its best.
no effing way..
will i
take this
seriously
ever
again.
if this were poker..
i’d call.
and nascar….
you got nothin’
you threw away the winning hand.
so sad.

babydufus is correct. In my own words NASCAR covets a manufactured hyped storyline above honest clean driving to suit their desired outcome. We have seen it time and time again. The manufactured bull at this race is nothing new, and I do believe it was and will be in the future. The script writers this year need to be represented at the faux award at Las Vegas, only fair they get their due and praise from the idiots.

I wonder which movie NA$CAR will submit as their Oscar entry as a comedy? I’m sure DW and Mikey are waiting for their nomination as best comedy duo.

I can see those two clowns practicing their speeches in the bathroom mirror. SMH.

Damn, I thought the Headline regarding “Failure” was pointed to the great race at Dover. In my mind a 1.8 rating should be considered a failure in sports (entertainment) programming.

Actually, fans weren’t that enamored with Johnson’s run either. Doesn’t surprise me that fans are yawning. The chase, kit cars and tepid racing has killed the passion most fans had for NASCAR and the younger generation that BF cares so much about seems to be oblivious to NASCAR.

JohnQ
Reply to  BIll B

How can they not see that? It is so obvious.