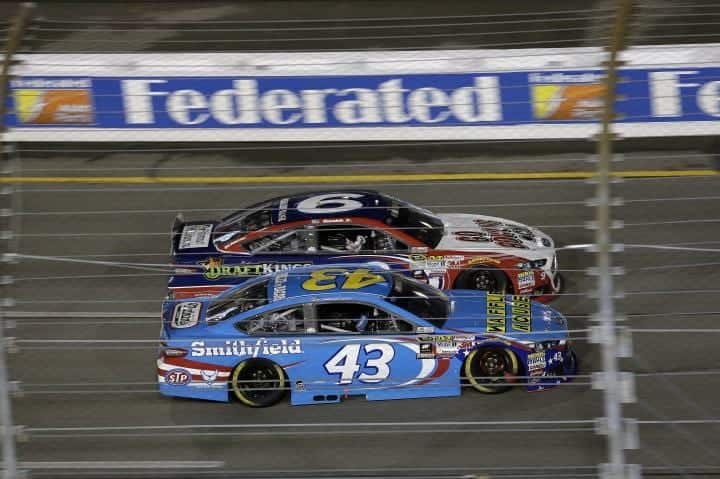 Just when you think Kevin Harvick can’t get it done at Dover, needing to bring home a victory in order to stay in the Contender Round of the Chase, he does it again. “The Closer” led nearly all of the 400 laps, with 355 at Dover in the AAA 400 on Sunday. His dominance wasn’t a huge surprise since Harvick’s first trip to Dover back in May ended in a second-place finish to Jimmie Johnson. The win allows Harvick to attempt to defend his title and move on to battle another week in the next round of the 2015 Chase for the Sprint Cup.

Speaking of Johnson, he didn’t have such a great outing on Sunday at Dover. The No. 48 machine had a rear axle failure during the race and spent 37 laps in the garage area. Johnson finished 41st and out of contention to make it into the top 12 drivers in the second round of the Chase. So those of you who picked the Vegas odds favorite and selected Johnson to take home the Cup at the start of the season, you might want to get a refund.

This week, we also heard more details on Clint Bowyer‘s future in NASCAR, and that he’ll be joining HScott Motorsports through a partnership with Stewart-Haas Racing to field a Chevrolet next season with the two-car team. There is speculation that Bowyer may end up taking over the No. 51 seat from Justin Allgaier if sponsorship can’t be secured. The team may also end up adding a third car to the operation just for the 2016 season before Bowyer heads over to SHR full-time in 2017 to take over for Tony Stewart.

We also saw a sponsorship shuffle of sorts take shape over at Hendrick Motorsports. As retirement looms for Jeff Gordon, longtime sponsor Axalta announced it will be switching from Gordon to the No. 88 of Dale Earnhardt Jr. for 2016 and beyond. As we know, 19-year-old Chase Elliott will be taking over Gordon’s car next season, bringing current Xfinity Series sponsor NAPA Auto Parts along with him.

Q: Hey Greg, since now we know that Bowyer will be in a Chevy with H. Scott Motorsports next season, and NOT over at Richard Petty Motorsports as some thought, who do you see landing at RPM in the No. 9 car if Sam Hornish Jr. doesn’t return to Cup racing? Thanks. – Clay P., Murfreesboro, Tenn.

A: Hi there Clay, thanks for the question this week. I heard that rumor too about Hornish Jr. It’s really too bad that Hornish hasn’t been able to find his place in the Sprint Cup Series because I’ve always thought he was a talented wheelman. If Richard Petty Motorsports decides not to bring back Sam Hornish for the No. 9 Fusion, and according to the team they’re not set on who will drive the No. 9 next year, there are a few names floating around out there that would make some sense to tap.

First, I think you have to look at David Ragan, who after leaving Front Row Motorsports for Michael Waltrip Racing (and a short stop over at fellow Toyota team, Joe Gibbs Racing, to fill in for an injured Kyle Busch) will be without a ride for 2016 when MWR shutters. Ragan has proven he can win, and with the right equipment and team, I think he can do it again. After Ragan, I think you take a look at Dakoda Armstong, who drives the No. 43 down in the NXS for RPM. Armstrong is just 24 and has a ton of potential as a driver, posting four top 10s and a pole since 2012. He’s also a seasoned Camping World Truck Series driver, beginning his run in the trucks back in 2011.

After Ragan and Armstrong, there are a bunch of random names you could look to, but no one that really makes a ton of sense for RPM, or for Ford, which just re-upped with RPM for next season. There are always rumors that Elliott Sadler would get back into the Cup Series, but he seems to be just happy running and contending for wins down in the NXS ranks. Plus, he just signed on with JR Motorsports, a Chevrolet organization, on that side. Then there’s the question of what Roush Fenway Racing does with its current Cup drivers and the rising star that is Chris Buescher. Does he get another year down in the minors? All questions which will be answered over the next four months. But if there is an open seat at RPM in the No. 9, expect it to be a coveted ride for 2016, as it’s looking as there really won’t be a lot of them.

Q: If the franchising comes to be in some form, is it possible that teams already in existence will have to pay a ‘franchising fee’ for each team? Would this be a way to eliminate the mega teams and encourage more smaller teams, says, limiting each owner to two teams and perhaps one or two affiliated teams? – Sal B., Oxford, Mich.

A: Hi again, Sal, thanks for writing in. It’s my understanding that, yes, all teams would need to pay what essentially would be their entry fee into the sport. If you take it as everyone is starting from scratch, it’s actually a fair model. Right now these teams, as I’m sure you know, have very little in the way of financial security and having the equity of a franchise at NASCAR’s highest level will be pretty valuable – more than just equipment and a shop.

What is still being discussed in these closed door meetings that the owners (via the Race Team Alliance) and the sanctioning body are having is really how both sides work out all these details. As you asked, will teams be limited to just two franchise “medallions” or will that number stay at four? How do you incentivize smaller organizations to invest and build their business while the mega-teams create affiliations and essentially gobble up these other smaller teams? How many total teams will there be, and what will that cost? These are all questions that continue to be discussed by this group, and from the sounds of things, based on Stewart’s positive reaction last week in his retirement presser about the way things are going with NASCAR, everything seems to be falling into place for 2016 and beyond.

Franchising can only help these teams who are seeing their sponsorship dollars dry up and their doors close with not a whole heck of a lot left. Look at Michael Waltrip Racing, for example. Right now, the organization is selling off what they can to make a profit before the two teams cease operations after Homestead. It’s a sad part of the business of NASCAR, but the hope is that franchising will greatly reduce these things from happening. Having real value in the team, not just the cars, pit boxes, and tools, but real value through NASCAR, as all the other major league “stick and ball” sports teams do would really be a game changer for the sport. For NASCAR to stay competitive and in the mainstream conversation, it’s something that needs to happen.

Sam Hornish Jr. has been given multiple opportunities to find his way in Cup for some time, and that has come at a high price for teams regarding torn up race cars and poor finishes, DNF’s and next to last. He seems like a nice guy, but so what? No doubt he has talent behind a wheel, he just never seemed comfortable or good driving a “stock car” at Cup level. Yah, seems he got a raw deal with Penske regarding the NW series, but that was one decent year and the script was written for people to warm up to the idea of the 3 car going back to Cup if the 3 car won in NW…he was not going to get that trophy. My tin foil hat theory. NASCAR thinks it’s fans are stupid. I believe Richard Petty Motorsports can be competitive, but in reality the driver has to be competent and he isn’t. Aric is putting up decent finishes recently, but that needs to be consistent. Time will tell.

..And when was the last time Elliott Sadler contended for a “win”. Just asking. The though of him returning to Cup should not even be a consideration, he seems to be happy with his paycheck as is, who can blame him. Although given his age with the youngsters…maybe trucks after this deal with JMS (as it seems he has driven for everybody else). He can go with the old guys in trucks and nobody screams about candy taken from “babies.

One of the things that intrigues me about franchising is that Nascar has always considered the teams as independent contractors. That changes once Nascar begins collecting franchise fees. It gives Nascar greater control over how the teams operate and how they are managed. Teams may improve their financial stability once they are part of the franchise, but at a cost. It will be interesting to see how things develop in this regard.

Certainly I don’t understand all the details of the proposed franchising. Plus the owners of the megateams are smart business people with ample resources, more than Nascar probably.
Yet I fail to see where what we see as franchises benefit the team owners. I get the concept of requiring prospective new owners to buy an existing team rather than start from scratch. But that only works if there are people wanting to buy your team.perhaps they are out there but keeping quite about it. Yet i haven’t read where MWR has been bought, perhaps i missed it.
On the other hand if you have a sponsor paying you x million per year to campaign your shiny race car shouldn’t that be your budget? if you’re spending more than that, thats on you. Seems to me that if you’re selling stuff that your sponsor paid for, even at .10 on the dollar that’s not too bad.
But we shall see i guess.

Charles DeGaulle is purported to have once said that when France faced grave economic problems he forced all of the country’s top economists into a room and forced them to come to a consensus as to what to do about it. Then he would do the opposite. Given the recent performance of the NASCAR brain trust if they think franchising is a good idea I’m against it.

If you read about F1 they are whispering about franchises over there as well. One of the issues of concern is that of car suppliers. Currently every team has to build its own cars. But with franchising perhaps there would only be saw 4 teams that build cars, the rest buy their cars from them.
This is considered heresy in F1 and a huge stumbling block.

Yeah, you’re right, he’s ready for the top series with numbers like that.

I think the resident black cat Shaky Leg :) at at at Atlanta has better stats then most of these guys they try and tell us how wonderful they are.