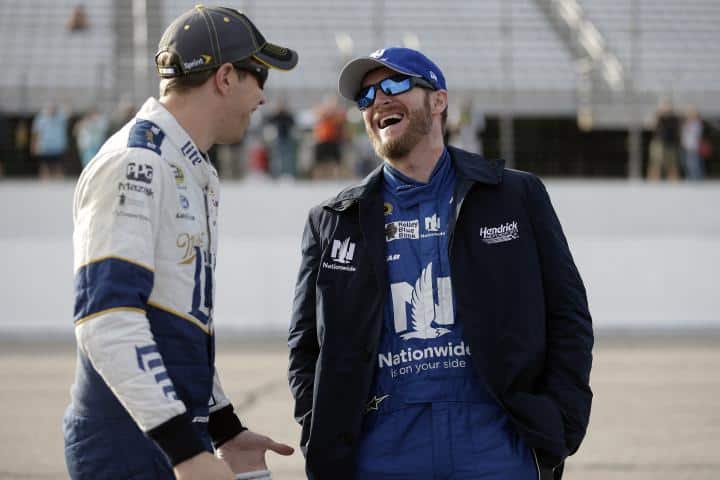 Just let @SamanthaBusch fill out @draftkings lineup. She chose based off player picture, coolness of name, no stats ?

It seems Samantha Busch has found a new hobby during her free time. The wife of Sprint Cup Series driver Kyle Busch submitted a one-day fantasy lineup. Wonder if she lost any money using her own method of choosing her players.

@jim_utter @jeff_gluck @MattWeaverSBN look at you 3 getting along! Maybe we need a new media version of the chase to spice it up around here

Brad Keselowski came up with an excellent idea as a way to spice things up in the NASCAR media center. Keselowski suggests a media version of the Chase for the Sprint Cup! Hopefully everyone at Frontstretch will automatically advance!

Max is on the SHR plane row 1 seat 0 pic.twitter.com/VHIVvUHtSV

Tony Stewart tweeted this photo of his dog Max while flying back home after race at Dover international Speedway on Sunday. We’re surprised the two did not fall asleep during the entire flight back home as both appeared to be tired after a long day. It’s also a good thing that porkchop doesn’t have his own Twitter and he would probably be jealous.

@roushfenway He isn't scary. He spends most of his free time cleaning @JimmieJohnson's pool. pic.twitter.com/qkEyD0w7hR

NASCARCasm has found the exact spot where Miles the Monster enjoys hanging out during non-active weekends at the Dover International Speedway. Apparently the undisclosed location is at the Jimmie Johnson residence. NASCARCasm even tweeted out this undercover photo taken of the monster cleaning out the family pool. Let’s just say, we love Miles the Monster!

Wall of CFB helmets @cfbhall. Over 770 all together. I'm a little behind on my personal collection I see. ? pic.twitter.com/RD4ZKbnxSS

Dale Earnhardt Jr. took some time out of his busy schedule to visit the College Football Hall of Fame on Thursday in Atlanta. I’m pretty sure Earnhardt has the money to catch up!

Austin Dillon spent some time at the Charlotte Motor Speedway last Wednesday. Dillon joined many breast cancer survivors painting the track walls pink before this weekend’s race at the 1.5-mile oval. Painting a track pink and raising money for a great cause would be a lot of fun!

After learning Mr. Clint was going to be daddy's teammate when Uncle Moke retires, Keelan asked if that meant Baby Cash was his teammate. ?

Keelan Harvick seems excited for the addition at Stewart-Haas Racing in 2017. Last week, Stewart announced his retirement and that Clint Bowyer will be replacing him in 2017. It seems Keelan is happy to have a new playmate!

Judging from the first day on the job I'd say we're going to have a ton of fun. Let the games begin!!! pic.twitter.com/qM91QNXC15

Bowyer had some fun when going to SHR to announce his 2017 plans. Bowyer, the character that he is, parked really close to someone’s vehicle where they couldn’t open the driver’s side door. Oh the fun they’re going to have down the road….

Ryan Blaney and Darrell Wallace Jr. are two of the closest friends you will find in the NASCAR garage area. When not focused heavily on racing, you will see these two make numerous jokes that will have you laughing for hours. Looks like Nickelodeon Sports decided to join in the fun.