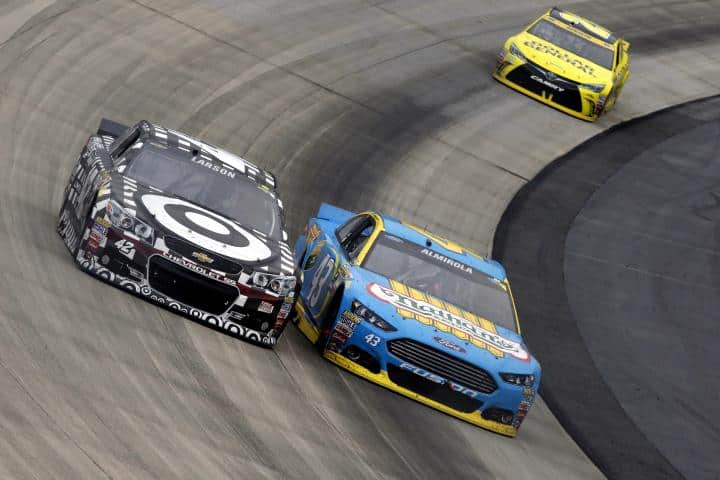 Did You Notice? Past performance is not always a guarantee of future success? I took the results of each remaining Chaser from earlier in the year, then added up the points from their performances at Charlotte, Kansas, and Talladega to simulate the next round of the postseason. Here’s how it all shakes out…

* – For Kyle Busch, I used two results from races last fall (second at Kansas and crashed out at Talladega) since he was hurt for the first 11 races of 2015.

If anything, these points tell us how much has changed in the last few months on the Sprint Cup landscape. It lists Earnhardt as the hottest driver on the circuit; since then, Hendrick Motorsports has struggled and fallen behind Joe Gibbs Racing in terms of overall speed. Earnhardt needed every ounce of driving skill just to sneak inside the top five and make the Chase at Dover. While Talladega offers him a great chance to win – the No. 88 team is arguably the best at restrictor-plate tracks right now, conjuring up images of Dale Jr.’s dad – it’s unlikely he’ll do as well at Charlotte and Kansas.

On the flip side, Hamlin and Kyle Busch are much more likely to ride the coattails of JGR’s recent success. Hamlin, who crashed out at Kansas has already won in the Chase and has been strong at plate tracks as of late (winning at Talladega last season). Busch, whose lone 2015 result we can apply is an 11th-place run at Charlotte accomplished that in his first full race back from injury. It’s far more likely he’ll run better there the second time around, paired with a top-five finish once again from Kansas. Sub Erik Jones had a possible winning car there before crashing down the stretch in his full-race Sprint Cup debut.

The one point I do take away from these early results is Team Penske is going to have its work cut out for them. Keselowski got slammed with that restart penalty at Loudon, debatable in its own right, but that’s the only track the No. 2 car showed winning speed. They appear a step behind at intermediates, and the next three races favor underdogs like Newman, who have strong results in the recent past at Kansas, Charlotte, and Talladega.

Logano, while having a much better season (he’d be neck-and-neck in the points with Harvick without the Chase) also appears vulnerable. He qualified on the front row at Kansas and Charlotte earlier this season only to drop a combined 16 spots in those races. Talladega left him a crash victim, but even with a top-20 finish there wouldn’t have changed things under this simulation. The last trio of races wound up being Harvick’s challenge, and you wonder if his main rival is about to undergo the same scenario.

Did You Notice? Kyle Larson has eight top-15 finishes in the last 10 races? That’s compared to eight top 15s in the first 19 events, a sophomore slump that ultimately kept him far away from making this year’s Chase. The results are important for two reasons. One: crew chief Chris Heroy appeared to have his job on the line after a spring and early summer of subpar performances. The pressure seems to have abated there with Larson starting to show the strength he once possessed midway through last season.

The second point, though is Larson’s star power, however strong it can grow is becoming increasingly important to the future of NASCAR. It’s no secret how far TV ratings have fallen; no need to beat home that point a 55th time. But with Gordon’s pending retirement and Tony Stewart on the way out, Larson was supposed to join Logano in leading the next generation of stars into the hearts of racing fans across the country. For whatever reason, Logano has failed to catch on nationwide and hasn’t appeared to have the type of mass appeal that will rise him to the level of Gordon and Stewart in popularity. Larson, meanwhile has the type of aggressive driving style that could catch on; he’s also the biggest name from NASCAR’s Drive For Diversity program as they look to reach out and grab a new cultural mix of fans across America.

Keep in mind how explosive the third seasons have been for drivers like Gordon (won a title), Kenseth (five victories) and Keselowski (multiple wins, Chase contender). Observers in Larson’s camp are hoping for a similar explosion and setting him up for one now will be crucial in this age of parity among the top teams. Now, with Jamie McMurray eliminated from the Chase, expect Chip Ganassi to switch the focus on Larson and getting the No. 42 car into Victory Lane before the season is out. There’s a reason Stewart wanted to poach this kid….

None of those brivers who had breakout third-year seasons drove for Chip Ganassi. It remains to be seen if Rob Kauffman’s money can elevate Ganassi Racing to the next level. If it doesn’t, I fear Larson may end up being a driver with unrealized potential.

NASCAR needs to improve the overall racing and end its dependence on gimmicks to try and attract fans. Drivers like Gordon & Stewart, as well as others in the current vanguard of popularity, were all a part of NASCAR’s growth period. It is hard to attract fans if less of them are watching.

I just shake my head in wonder how NASCAR declined to use the low downforce package raced at Kentucky and Darlington. The 2015 package is SOOOOOOOOOOOOOOOOOOOOOOOOOOO bad it’s a crime. I’ve been bored watching the first 3 races of the Chase. Once the cars get strung out virtually none can pass.

Well you know NASCAR, they seem to think that it is better to dig in their heels and say “this is the way we are going to do it” than change to something that would make it better. It was the same way when they rolled out the COT. They SHOULD have waited, done more testing and allowed Goodyear to develop a tire that would have worked with the change in the car. Instead, nope, they forced the changed and then when it raced like a “brick on wheels” as Stewart referred to it. Of course then rather than listening to the drivers, NASCAR once again reverted back to their “say anything bad and we’ll fine the crap out of you” method of managing.

So my reaction to the “let there only be “happy talk” made me unable to believe anything the drivers said either. The credibility gap that grew out of all that was another nail in the coffin that NASCAR was building for themselves IMO.

I agree with you about the horrible boring follow the leader junk that we’ve seen in the first 3 events since I don’t think you can even call that hot mess racing.

As soon as I see the word Chase I stop reading the article. Anybody else?

JohnQ, ha, no, I’m still a glutton for punishment so I read it all -even though the word “chase” makes me gag. Plus I enjoy reading the comments so I like to know what is being commented on.

I kind of felt it was the media selling Larson as NASCAR’s next savior. Most fans had more realistic, wait and see expectations. This is just reality. He may be a great one, he may not. Only time will tell. Until he turns that corner maybe writers shouldn’t push it.

GinaV24
Reply to  BIll B

Bill B, IMO NASCAR and the media have been trying to find the “next big thing” and force it on the fans for several years now with a total lack of success. Larson seems like a decent enough fellow as are many of the other young drivers but I just don’t believe you can force that kind of thing. Quite often, the more the media tries to push someone on me, the more often I’ll resist. Kind of perverse, I know, but that’s how it is.

Its obvious that the media, and I’m assuming Nascar, want to create the next great star. And if it ties into the narrative they are pushing. However it doesn’t help that the object of their push hasn’t really done anything. But that doesn’t stop them from trying.

“The second point, though is Larson’s star power, however strong …”

Maybe it’s just me but I just don’t see a lot of star power out of most of the younger drivers and it’s for a simple reason: They need to win…a lot. Times have changed for NASCAR from when Gordon and Stewart came into NASCAR. NASCAR was on the rise with every corporation throwing money at the sport which when coupled with a winning driver made that driver a household name. Ratings were high, lots of fans, lots of merchandise purchased, lots of “Official Blah-blah of NASCAR”. It was a time when drivers such as Gordon and Stewart, because of their wins/top-fives were known to people that didn’t follow NASCAR but then the NASCAR bubble burst and the casual fans started looking for the next big thing. I suppose if one of the young drivers started winning as much as Gordon or Johnson did maybe it might spark some interest in NASCAR to bring in some more new fans but in my opinion NASCAR has a few more issues to deal with to make that a reality (such as cookie-cutter tracks, slot-car race cars, not allowing the crew to make changes to their engines/suspensions etc.)

Gordon became a star in NASCAR because he won just about every week (or so it seemed at the time) but in the case of Larson (as well as other drivers) is the media is pushing the “rising star” a wee bit too much? In order for fans to buy into Larson being considered a hot commodity in NASCAR he needs to start winning, and win a lot not the other way around whereby the media tells us he’s a star.