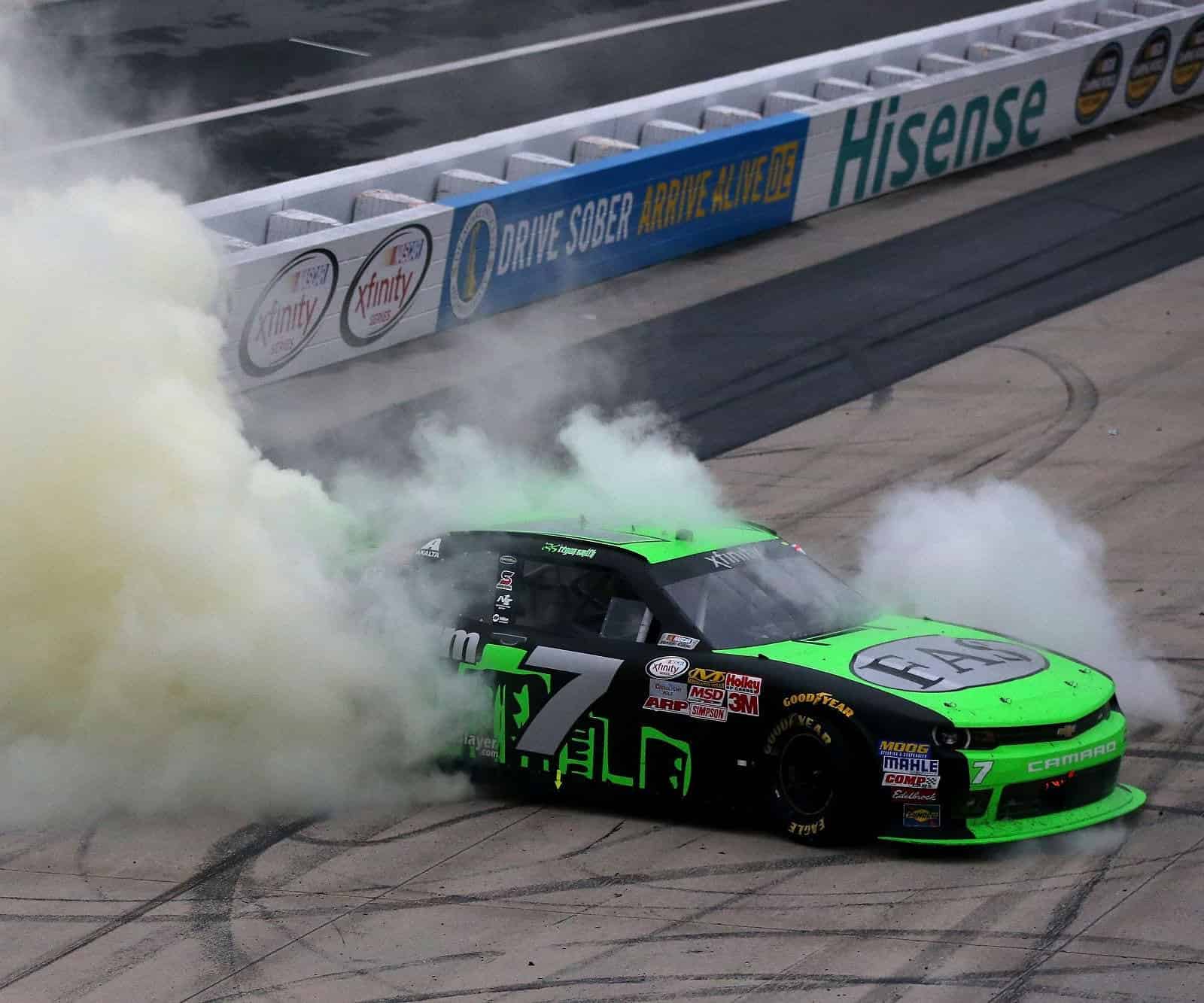 A headache the morning after a win is usually a good thing. Celebrating a solid, hard-earned victory is what life is all about in NASCAR. But then again, who actually likes having a hangover?

Regan Smith does not know who he will be racing for in 2016, or in what series he will compete within. However, that did not stop him on Saturday at Dover International Speedway. Following a minor rain delay in the Hisense 200, the No. 7 Chevrolet went on a tear, dominating the final 80 laps and holding off Cup Series veterans Denny Hamlin and Kyle Busch for the victory.

But while all of the focus should be put on building momentum for next season, Smith might be left with even more questions after earning his sixth Xfinity Series win since November 2012, when he returned to the sport’s second-tier division. His contract expires at the end of the year with JR Motorsports, the reigning NXS champions. One of his sponsors, TaxSlayer, is returning for 10 races on the No. 7 and No. 88 cars next year, but Smith’s status is still unknown.

“They’re all big, but when you don’t know what your job is next year, it’s huge,” Smith said at Dover following his win. “I guess that won’t hurt for solidifying my job status. We’re working hard on a lot of things. I’ll worry about that on Monday, Tuesday and Wednesday. Tonight, I’m going to drink a lot of Dale’s Pale Ale and I’m going to have a headache tomorrow, not going to lie.”

With a plethora of sponsors adorning the No. 7 car in 2015 – 17 to be exact – it leaves a major gap that the team cannot afford. JRM announced the signing of Elliott Sadler and his long-time sponsor, OneMain Financial, for the 2016 season on Friday at Dover. The move, while some say could leave Smith without a ride, might be a blessing in disguise.

Sadler has been a rival of Smith’s since the two former Cup drivers began competing for the NXS championship with some of the sport’s younger drivers. Going back to the division has proved to be the right decision for both drivers instead of running mid-pack in the Cup Series. But with the possibility of championship rivals competing on the same team in 2016, it could cause some controversy.

Sadler is bringing a full season’s worth of sponsorship, along with 10 victories and 435 Cup Series starts with him to JRM. Meanwhile, Smith has been known as the “super-sub” in the Cup Series, replacing Kurt Busch earlier this year and Tony Stewart for one event in 2014. And while Sadler hasn’t shown the speed that Smith has in the NXS over the past two seasons, he has the one thing Smith doesn’t – consistent sponsorship.

JRM also has Ben Rhodes, last year’s K&N Pro Series East champion, in its stable. Running nine events this year (with one scheduled race remaining), he’s struggled to find consistency, earning two top 10s and three DNFs. The lack of track time has significantly limited his ability to learn, but with the possibility of bringing over more funding, running him full-time would mean Smith might be out of a job.

Re-signing: JRM has said multiple times that it wants to re-sign him. However, it is more complicated than just doing that. The thorough process consists of making sure the key parts of his team remain, and if Rhodes were to step up to drive a fourth car, that might send some of Smith’s sponsors to the young, more energetic driver.

But at the same time, Smith has welcomed several new sponsors into the sport, such as Fire Alarm Services and Breyers. His marketability as a former Cup winner and consistent championship contender is one that only Sadler has on his resume. If he were to return, it creates an obvious ability to win a title as teammate Chase Elliott departs for the Cup Series in 2016.

The next three scenarios all depend on whether or not Smith could bring over sponsorship:

Richard Petty Motorsports: This scenario appears to be Smith’s only other top option if he doesn’t re-sign with JRM. With Sam Hornish Jr. struggling mightily with RPM, sitting 27th in the standings compared to teammate Aric Almirola in 18th, the organization is open to bringing another driver on board. Hornish has struggled to find funding for the No. 9 car this year, and his performance is not up to the standard that Almirola has set.

Instead, with David Ragan and Smith appearing as the frontrunners for this ride, it might be his best bet to get back to the Cup Series on a full-time basis. However, it will take sponsorship to do so. Ragan had been bringing in new companies with his old team, Front Row Motorsports, until he departed early in the season. But Smith’s time in the Cup Series was plagued with blank quarterpanels. His marketability has improved, along with his resume, giving him the upper hand over Ragan if he doesn’t return to JRM.

Joe Gibbs Racing: Over the years, JGR has created one of, if not the best, NXS organization. Consistently contending for victories, the organization is a powerhouse. If Smith gets out of JRM and cannot sign with RPM, JGR could start a fourth car. Erik Jones will be piloting one of the team’s cars next year, along with current Rookie of the Year candidate Daniel Suarez.

It would require a massive effort to make this deal happen. However, stranger things have happened and JGR would absolutely love the opportunity to bring in Smith, especially since it just partnered with Furniture Row Racing, Smith’s former Cup team.

Richard Childress Racing: At the end of the season, RCR might be doing some swapping. Brandon Jones will be competing full-time in the NXS next year, and Brendan Gaughan will likely continue to pilot the No. 62 car. Besides that, it is unknown what Brian Scott and Ty Dillon will be doing. Both drivers are rumored to be headed to the Cup Series – or at least trying to make that happen.

That leaves open the possibility of Smith joining a team that has won a title within the past five years. RCR has been known to be a top-tier team, and signing him could be a big deal if they can gather the funding to do so.

As long as Smith finds a home in 2016, it will benefit him to have a long-term deal. He has been working on one-year deals since he returned to the NXS, and a multi-year deal could provide him with the ability to prepare for the years to come, making sure he doesn’t become a title contender that cannot sign sponsors as we have seen in the past.

“Sam has been disappointed, we’ve been disappointed,” said Brian Moffitt, CEO of RPM. “Really, what it’s going to boil down to is funding, where that funding comes from. We like Sam. We hope that that can continue there, but we’re also looking at all options.”
Regan Smith with “no consistent sponsorship” does not seem to fit RPM’s criteria. It would also seem that if RPM is “disappointed” [aka: unhappy] with Sam, they missed an opportunity with Sadler & One Main. I would say, Regan Smith, hopping into the #6 RFR NXS seat that Elliot Sadler vacated is a possibility, yet again, the lack of sponsorship makes that possibility sketchy too, as RFR & Ford already consistently sponsor two or more of RFR’s NXS (& 1 Cup) cars. So, I would tend to think RCR might come up with something regarding Smith.
David Ragan would seem more likely at RPM, but unlikely also. I can not think of one driver who has gone from Ford to Toyota, then back to Ford. And Aaron’s has “…decided to take some time off from a team sponsorship for the 2016 season.” Unless Aaron’s suddenly does an about-face & decides to go RPM racing with David Ragan, the RPM #9 seat seems as fuzzy as Regan Smith’s & Justin Allgaier’s future. The key to the RPM equation could be David Ragan’s ability to attract sponsors. If he can do that, he gets the RPM nod.
So, I will hold out for the Aaron’s Petty #9 Ford. It does have quite a harmonious air to it!

I go back a ways been a nascar follower since early 70s, cheering on Buddy baker, then to Jimmie Spencer. When he retired i was lost finding a favorite driver. Though i love the sport and follow the races, not having a driver i truly liked to watch did not make the tv viewing pleasurable.. I now am excited to say i have great interest back into the game with the talent of Regan Smith, i Sure wish him the best with the efforts in getting back to the Sprint cup. he has proven his abilities, has great words on his sponsors, and when he won Daytona with Ragu sauce its now what i use on my pasta.. i want to feel the excitment of Sunday Sprint Cup. sure hope it happens for 2016 Keep fighting Regan