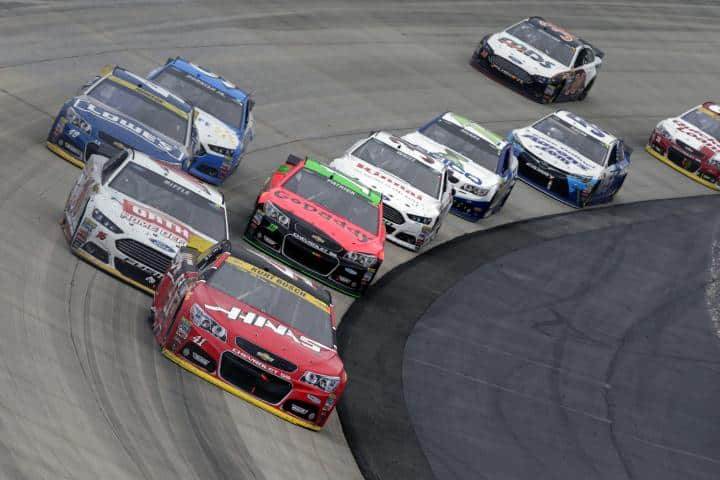 Busch’s No. 41 team was posted for rear bumper tubing found during pre-race inspection. The No. 14 team of Busch’s teammate and owner Tony Stewart was warned for the same infraction.

The No. 78 of Truex, the No. 46 of Michael Annett, the No. 23 of Jeb Burton and the No. 6 of Trevor Bayne were also given warnings for failing pre-race tech too many times.

For Truex, it was the second penalty of the day. NASCAR placed his crew chief Cole Pearn on probation through Dec. 31 after the team was found to have illegally modified the right-rear quarterpanel between pre-race inspection and the start of the race.

Odd, Harvick wasn’t penalized for the obviously flared out skirt that the booth was talking about. I liked how the booth attributed the flared out skirt as a result of some on-track altercation. I haven’t seen two race cars bump into one another and cause the skirt to be pulled out the way it was. It looked just like all the times that I’ve seen the panels pulled out (before NASCAR put a stop to it). Do I think it made the difference enough to get Harvick up front before he pitted and fixed the panel? Not really. Harvick was running away with the race and there was no one that was going to catch him.

I thought the same thing. More bull from the booth. It would be interesting to watch the take a look at the Harvick pit stops. But at least they weren’t talking about the c word.

It should be: It would be interesting to take a look at the Harvick pit stops.