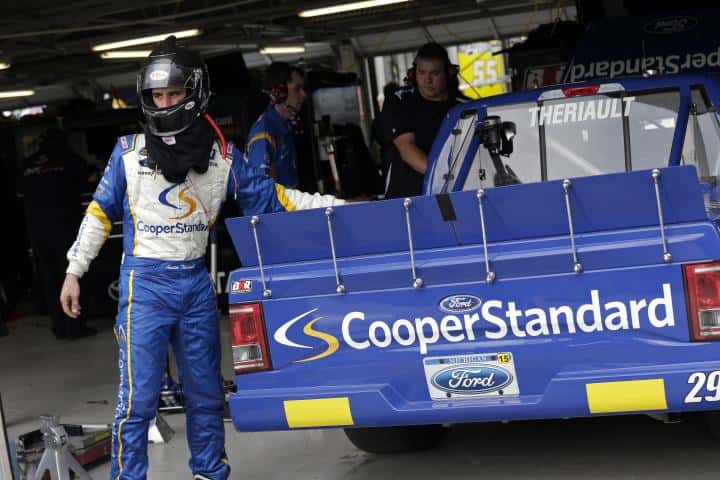 If you didn’t see Saturday night’s terrifying crash that ended in Austin Theriault being airlifted to University Hospital, it’s likely you’ve seen a replay somewhere by now. Obviously, the major emotion immediately following that accident was one of hope that he was alright, but once the driver of the No. 29 Ford was out of the truck and gave a thumbs up to the crowd, that emotion quickly turned to outrage over the lack of SAFER barriers in an impact zone.

The result of the head-on hit left Theriault with a 10% compression fracture in his back. And while the injury wasn’t worse, many were left wondering why, especially in the aftermath of Kyle Busch‘s serious accident into a concrete wall at Daytona earlier this year, the speedway was seemingly dragging its feet.

Interestingly enough, according to a report from ESPN, LVMS spokesman Jeff Motley said earlier this week that plans were already in place for the softer walls to be installed in the area Theriault hit.

A lot of good that did for Theriault, though.

The good news is that he appears to be on the road to recovery. The Bangor Daily News reported on Monday that fully intends to race again this season,” according to his father Steve. Also in that report was a confirmation that Theriault was to follow up with an orthopedist on Tuesday, and while the team has kept any results of that visit under wraps, the 21-year-old did take to Twitter on Wednesday afternoon.

Day #1 of physical therapy done. Lots more to go- but things are heading in the right direction. Now I need a nap!

There are still so many questions surrounding Theriault’s accident, though. On Sunday, he tweeted a photo that featured multiple abrasions on his face and a black eye. Did something fail in the truck that allowed his head to be far enough forward to hit the steering wheel? What did his helmet look like after the impact?

I have always been under the impression that the mandatory HANS device that’s designed to reduce the load taken by the head and neck in a high impact crash shouldn’t allow a driver’s head to move as far forward as Theriault’s did Saturday night. Is it possible one of the tethers attached to the side of his helmet failed or wasn’t connected properly?

The answers to those questions may never be known by more than a select few in NASCAR R&D, but it’s certainly something to be concerned about.

Perhaps the biggest question for Theriault moving forward is how soon he’ll return to the truck. We already know there are plans for him to get back behind the wheel again this season, but will it be in the Truck Series’ next race at Talladega Superspeedway on Oct. 24?

A couple years ago, when Denny Hamlin suffered a compression fracture following a Cup Series crash at Auto Club Speedway, he was out for four races. Of course, there’s no way to know how the two injuries compare as far as severity without specifics from the medical records, something that’s protected by HIPAA laws.

But given that Hamlin was out for four races with a similar injury, let’s use that number for comparison. By that math, Theirault would likely be cleared for competition the following weekend at Martinsville Speedway, which might be the better decision anyway. Sure, it’s important for any driver involved in an accident with injury to get back in the saddle again to regain the confidence to compete at 100%, but a superspeedway may not be the best idea for a return anyway.

Think about it for a second; superspeedway racing tends to lead to large packs of drivers running just inches from their competitors, and one wrong move can trigger a melee that takes out half of the field. Can you imagine what would happen if Theriault ended up in the middle of one of those melees and suffered a career-ending injury at such a young age… or worse?

If doctors don’t end up clearing Theriault in time to compete at Talladega, that leaves the No. 29 Ford up in the air for that race. It’s not likely the team just won’t enter that truck since it has competed in every race this season with a variety of drivers. That said, I would imagine that owner Brad Keselowski and Joey Logano, who have both piloted the truck this year, would place much of their focus on the Cup Series that weekend, given that it’s an elimination race for the next round in the Chase.

The obvious choice for a replacement would be Ryan Blaney, who already has a win this season behind the wheel of the No. 29, along with four top 10s in as many starts.

I could be completely wrong and we could see Theriault back behind the wheel as early as Talladega, but one thing I am sure of is that I don’t want him to rush to get back in the truck. At just 21 years old, he has plenty of life left in his racing career, and it would be just awful to see a career shut down because he was too quick to jump back into competition.

Come penalty day on Wednesday, though, NASCAR didn’t issue any kind of statement related to the incident. I’m not sure if a point penalty would have been warranted, given that the padding likely wouldn’t have caused damage if it were hit by another truck anyway, but at the very least, the team deserved a written warning for the actions. It’s certainly something that makes you stop and think.

Moving forward, it wouldn’t surprise me at all to see Athenian simply continue to focus on a single series, rather than spreading itself too thin. The most interesting statistic that popped up after the race was that Townley scored his first career win in his 87th series start, nearly 100 races earlier than two-time champion Crafton.

Think about that for a second. Rewind back to 2008 when Crafton celebrated that first victory. It took a full five years before the driver of the No. 88 Toyota was a championship contender. Could the same turn out to be true for Townley in five years? It’s certainly possible, provided Athenian continues on the smart path for steady growth that doesn’t outreach its means and the talent back in the shop. Hard to believe that the driver often referred to in the past as “John Wrecks Weekly” could compete for a championship in as little as five years, but I also didn’t think Crafton would ever win the title when I watched him celebrate that first career win.

Crafton’s attempt to manipulate the race to his advantage should draw a harsh penalty. I’d sit him out two races. To me, it’s no different than what Bowyer/MWR did at Richmond although Crafton was unsuccessful. Both were intentional and blatant. NASCAR is a joke and what’s really funny is that a piece foam would ever cause a caution in the first place.

Rehab and Brian should pay.

The amount of bare concrete not covered by SAFER barriers is inexcusable. Billionaires playing with the health and well-being of drivers is obscene.