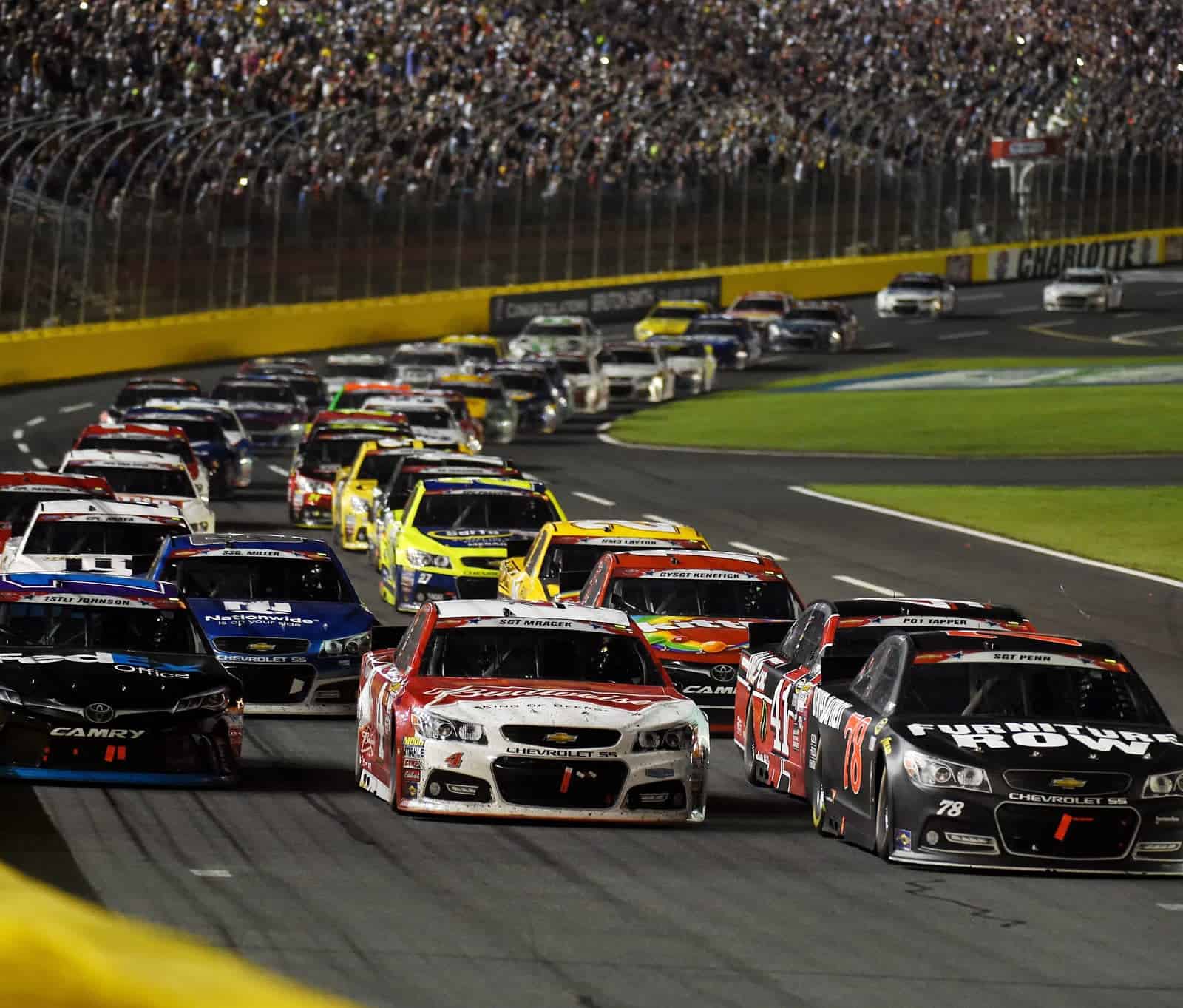 1. CAN WE HAVE A NON-CHASER STEAL THE SHOW?

If you watched the previous opening race of a Chase round this year, you should have a healthy grip on just how important the result can be. With Talladega in the distance – standing as the round’s elimination race in two weeks – do not judge Saturday night’s race at Charlotte at a lower level. The 12 remaining chasers will be hot on their heels to grab a victory, if not secure a little comfort with a solid night, as each and every point can and will make the difference.

So, how in the world will a non-Chaser sneak through the 12-man roulette wheel to get a win? Let me throw three names out there and I’ll go from there: Kasey Kahne, Jimmie Johnson, Jamie McMurray.

On a normal race weekend in 2015, having Kahne as your winning pick would often lead to points lost on both ends. However, in Charlotte, Kahne is an easy contender. Searching through the stat books, this 1.5-mile circuit tops Kahne’s marks as he has more wins, top-five and top-10 finishes and laps led here than at any other track.

Though the last three Charlotte events have no laps led or top fives for the 35-year-old, that gut feeling tells me to watch the No. 5 Chevy.

Johnson’s Chase season ended in the garage last week. Beyond prediction, he is now defined as a non-Chaser – gasp. There lies the birth of this question. Having Johnson at a track he owned for a few years, you can bet the seven-time winner will be ready to stink up the Chase show and end the year on a high note with an eighth Charlotte trophy.

McMurray may have lost the thrilling fight with Dale Earnhardt Jr. last week for the final transfer spot, but the two-time Charlotte winner didn’t lose a step in attitude. Upbeat as one can be in his position, McMurray can be a contender Saturday night.

This is a special track for the Missouri man. Not only is it the site of his first Sprint Cup Series win, coming in 2002, or a million-dollar jackpot in 2014 with an All-Star Race win, but it’s also where he won his last non-restrictor plate race, which came five years ago in 2010.

2. WILL THE CHASE’S ONLY NIGHT RACE SHOW SOME SPARKS?

Literally, yes. The sight of these shiny colorful creations bouncing off the pavement as they dive into turn 1 is picture perfect for seeing some sparks. But let me ask about the other kind of sparks; the sparks I really do like.

Glancing back a year, you will have memories of Denny Hamlin and Brad Keselowski playing car tag through the infield garage while Matt Kenseth went lion-style, waiting in the pack until the crowds parted in the haulers.

Don’t forget the drama between Joey Logano and Danica Patrick as the Penske driver put Patrick into the outside wall during the race, sparking some hot radio chatter for our listening pleasure.

Saturday night racing is cliched for having those hot moments. Charlotte is the home of NASCAR and has had those moments of breathtaking action and uncontrollable passion. It is seen naturally on a weekly basis, but once you put the country’s 12 greatest drivers under such a pressure-filled vexation, the drama can be doubled – or better yet, multiplied by 12.

3. CAN JGR STRIKE ONCE AGAIN?

It’s been on the top of headlines all year: Joe Gibbs Racing started on the bottom and for months now have been the team to beat in order to advance through the Chase. But it is worth it? Not often does an organization have this amount of speed across four cars.

The team is in a bit of a tough run lately; I mean, they didn’t win at Dover. What was that about? Well, having half the team confirmed for round two by then along with the shear dominance shown by Kevin Harvick, I’ll give the organization a pass.

The team has the last three wins on 1.5-mile tracks including the most recent Charlotte race won by Carl Edwards in May – who also has the second-best average finish in Charlotte at 10.8.

In fact, all four Gibbs guys are included in the top-eight best career-average finishes at Charlotte with Hamlin at 13.2, Kenseth 13.3 and Kyle Busch 14.9.

Kenseth has been the team’s leading dog with five race wins and strong performance on 1.5-milers in 2015. Hamlin is returning to the track at which he won the All-Star Race. He’s also fresh off a 1.5-mile win at Chicagoland Speedway. Busch made his return to Sprint Cup Series racing here nearly five months ago. The 30-year-old has had quite the success since then and could be a favorite to get what would be a special triumph.

4. CAN JEFF GORDON END IT WHERE HE STARTED?

Every legend in racing history has that place where their careers took a steep forward drive, thrusting them into stardom. Jeff Gordon winning in NASCAR began right here in Charlotte as he took win No. 1 in 1994. Since that tearful day in May, Gordon has four more wins to boot, while leading active drivers in top fives and top 10s.

Charlotte Motor Speedway has put together quite the tribute roll for Gordon leading up to the soon-to-be-retiree’s final start at the track. It’s all well worth it. However, what has he done recently?

Looking at the numbers in recent years, since his last win back in 2007, Gordon has only three top fives and, since 2009, only one in the form of a second-place finish. Gordon has also had more DNFs at Charlotte than any other track with 10.

The recent downfall has put Charlotte one of his worst tracks in terms of average finish – being a 15.4.

Can Gordon pounce in his final start? Sure, but the tide will have to turn.

My eyes are hurting and my brain close to explosion trying to digest that last paragraph under #2.

I’ve gotten to the point that I read nothing that comes from one of the “stakeholders”. Know right away its nothing but mind numbing spin.

Janice…nice…you have been paying attention to the script!!!!!!!!!!

What happened to Janice’s spot on commentary?

Does anybody else feel sorry for the people who are trying to make this seem exciting?

there is a race this weekend? Nobody cares.

rg72
Reply to  Don in Connecticut

I live in the Charlotte area and ten years ago, probably 7 out of 10 people would know it was a race weekend.
I would put the number at 2, maybe 3 out of 10 now.