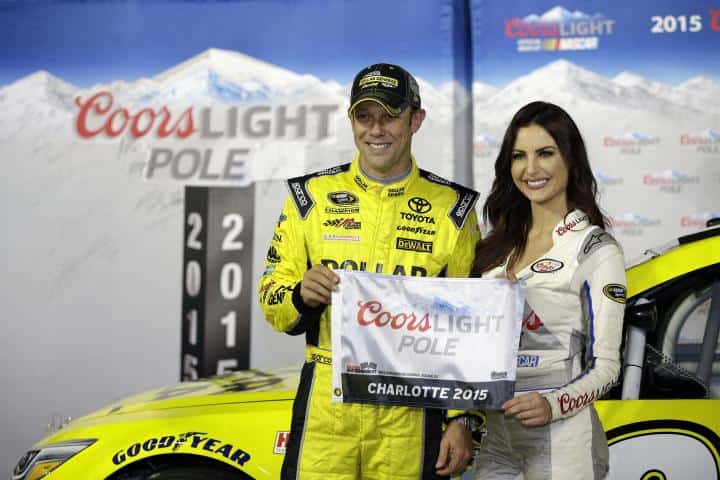 Matt Kenseth reeled off the fastest lap in the third round of qualifying at Charlotte Motor Speedway to take the pole for Saturday night’s Bank of America 500, the fourth for Kenseth this year and the 17th of his career. Kenseth’s lap time of 27.759 seconds edged teammate Kyle Busch’s 17.957 by less than two tenths of a second. Joey Logano will roll off third after improving his series-best average finish among active drivers. Greg Biffle wound up fourth and Denny Hamlin rounds out the top five. The rest of the top 12 include Kurt Busch, Jimmie Johnson, Carl Edwards, Aric Almirola, Ryan Newman, Kevin Harvick and Dale Earnhardt Jr.

Several drivers went out late in the first round and took advantage of a rapidly cooling track to make the top 24 and the second round, including Danica Patrick, Sam Hornish Jr., Ryan Blaney, Carl Edwards and Johnson. Both Paul Menard and Ricky Stenhouse Jr. tried to beat the clock for a final lap but didn’t cross the stripe in time.

All 12 of the remaining Chase drivers made the top 24, with Kenseth showing the top speed of the session, but three –Jeff Gordon, Martin Truex Jr. and Brad Keselowski – will start lower than 12th as they missed the final cut.

Josh Wise and Timmy Hill failed to make the field for the race.

Johnson doesn’t have to points race. He could win the next 7 races.