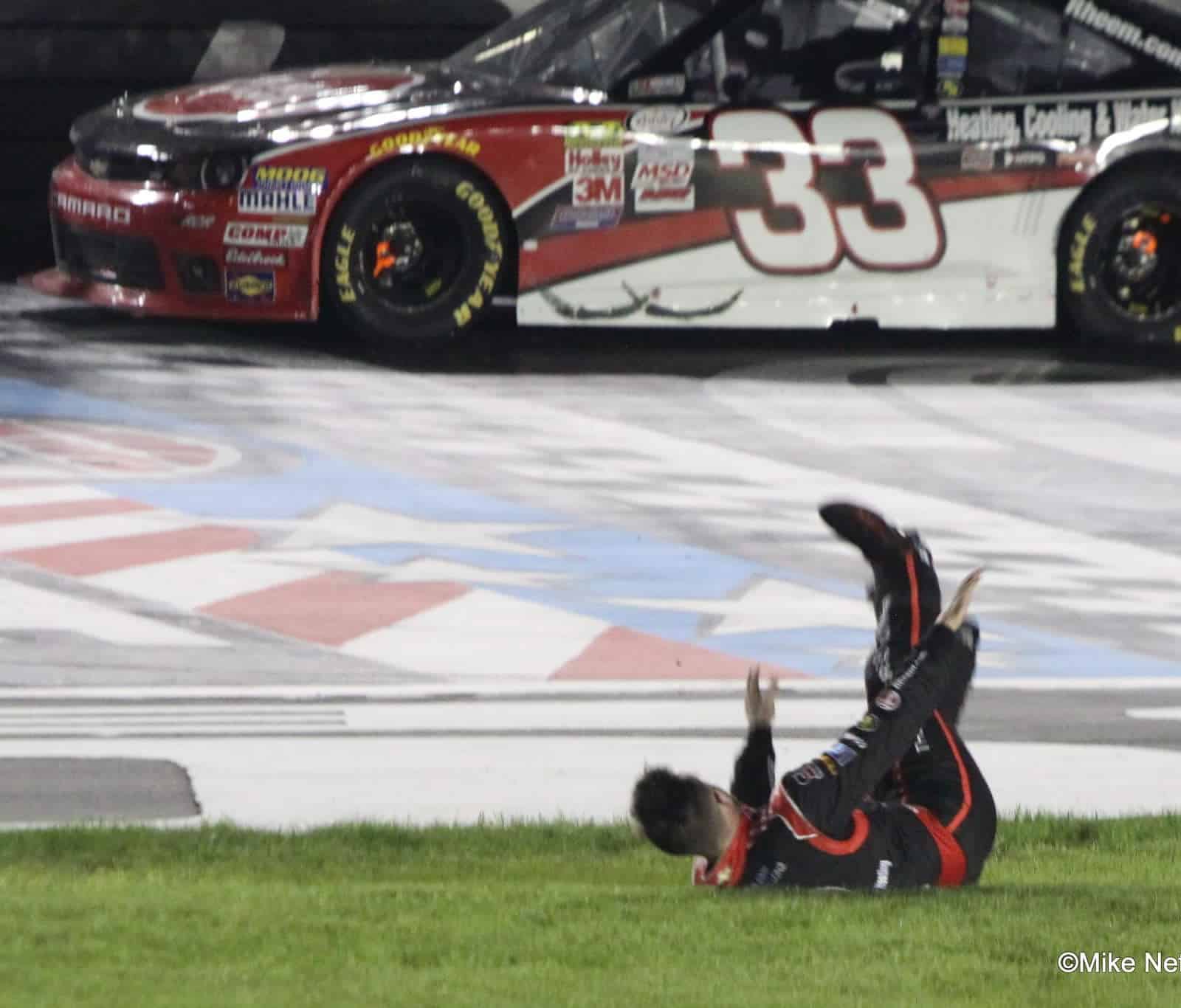 Kyle Busch led more than half the laps in the Drive for the Cure 300, but he wasn’t around for the one that counted. Instead, Busch ended the night in the garage as Austin Dillon made a clean sweep of Charlotte Motor Speedway, bookending his win in the May Xfinity Series race. Dillon, who started on the pole for the race, led three times for a total of 61 laps en route to the victory, his fourth in the series this year.

If people said Dillon was on fire Friday night, they just might have meant it literally. One of the fireworks set off during the pre-race ceremonies fell back to Earth still alight, hitting the side of Dillon’s No. 33 car and the backside of the driver’s firesuit. Dillon revealed his singed suit after the race, noting that the situation could have been much worse than it turned out. As it was, neither Dillon nor the car was any worse for wear.

Ty Dillon and Smith were the only title contenders to make gains on Buescher in points. Buescher remains the leader with four races left in the season, 26 points ahead of defending champion Elliott. Smith sits an additional eight points back in third, with Ty Dillon in fourth, 38 behind Buescher. Wallace Jr. is in fifth, 112 in arrears. Sadler, Suarez, Brian Scott, Brendan Gaughan and Ryan Reed make up the rest of the top 10 in series points.

Charlotte was good to several teams Friday night. Austin Dillon made the season sweep look easy – though his celebratory dive through the grass wasn’t quite up to snuff. Jones didn’t quite have enough for Busch or Dillon, but had a very fast car and if he’s looking to move into the series full-time next season, he’s making a strong case for himself.

Suarez continues to improve this season, and his fourth-place finish was also good for Rookie of the Race honors. Suarez and his No. 18 team have the look of a team on the verge of a breakthrough, and they have four races left this year to get their first win together.

For Smith, whose job is in jeopardy if JR Motorsports can’t find sponsorship for him, every race is an audition. Smith started 12th but drove his way into the top five in the closing laps, finishing fifth on the heels of his win at Dover last week.

It’s easy to go from hero to zero in racing, and John Wes Townley found that out the hard way a week after his first NASCAR win in the Camping World Truck Series race in Las Vegas. Townley smacked the wall early on Friday night and finished five laps down in 22nd due to the damage and subsequent repairs.

Busch and Kasey Kahne have had their share of run-ins on track over the last year or so, and things boiled over once again Friday night. The two were racing for position inside the top five when Kahne gave Busch a shot in the rear. Busch slid up the track and into Kahne, who hade moved up a lane, and the two got into the wall.  Busch took the brunt of the hit and took his car straight to the garage, telling his crew on the radio, “Don’t fix this racecar. Do not (expletive) fix it!” Busch left the garage area without comment. Kahne was able to continue and finished 12th, no longer competitive with the leaders after the damage. The pair will see each other in the Sprint Cup race on Saturday night, but where things really have the potential to get interesting is at Phoenix, where the two will square off in the NXS one more time in 2015

Ryan Sieg has had an impressively solid season. Running for a smaller team than most of the teams he’s raced for position this season, Sieg finished 14th and on the lead lap Friday night and is currently 13th in points, 97 out of the top 10 but just 12 back off 11th-place Jeremy Clements.

Four Sprint Cup regulars raced on Friday night: Busch, Kahne, Austin Dillon and Brad Keselowski. Truck Series drivers Jones and Townley also joined the party at Charlotte. Both Landon Cassill and JJ Yeley run for NXS points but will also run the Bank of America 500 Saturday night. Timmy Hill was scheduled to run both races at Charlotte as well, but failed to qualify for the Sprint Cup show.

While the race had its moments and even a few fireworks (real ones and the on-track kind), it wasn’t much of a show. NXS regulars combined to lead just three of 200 laps, both during pit cycles. That’s not great for a series searching for autonomy.

The points battle however, looks to be a good one. While Buescher has been absolutely solid for most of the season, a small slip during a race could tighten things up considerably in the final four races of the season, with three other drivers within 38 points, all with something to prove.  It could well come down to Homestead before they sort it all out.

“I don’t know if it was a sign from God or what, but He got me going with a firework in the butt.” – race winner Austin Dillon

“Clean air was super important. The closest we got to the front was third. I felt like our balance was good and (our car) was equal to all these guys, but track position was so important. When I was trying to move around on the racetrack and make something happen, it was getting a little tighter. I felt like we had a really strong car in the end. I feel like it was a solid day.” – Rookie of the race Daniel Suarez, finished fourth

“You always want more. I’m proud of the fight that the team had tonight, and we dug deep to finish fifth; we looked like about a 15th-place car once. I’m proud of my team, proud of my car, proud of my guys and Jason sitting on the box. We’ll go to Kansas and keep fighting.” – Regan Smith, finished fifth

“The good thing is we gained a couple points, so there is that. Our guys have done a really nice job and this is by far the best car I’ve had here at Charlotte, so I’m really proud of that. Our Zest Mustang had a lot of speed. We should have been a top-five car, but everyone is human and things happen. I make mistakes out there, too, so I can’t be hard on them. Everyone is human, but we’ll work on cleaning it up a little bit. I’m gonna try to work on a couple of things, but it wasn’t a bad day for us at all. We’re right there with them. We’re following them around the track. If we would have had a couple more laps we could have gotten them back there, but that was the end of the race and it was a lot of fun. I’ve already told Scott that he made me like this place a little more. It was fun. We had a lot of speed in the car. We were able to move around a little bit. I had a good time, so I like Charlotte a little bit better now.” – points leader Chris Buescher, finished seventh

Amazing how much less exciting it is to watch the Xfinity races when the Cup guys are dominating the field.

Which is probably why the present viewership is hovering around statistical zero. Nobody wants to see a high school pitcher dominate a Little league game. Why can’t NASCAR and the racing press grasp that?

The cup “race” might be worth watching now. Nah! Kyle won’t pull another Busch move until he’s out of it, which won’t be long.

I’m not sure what is worse, Kyle poaching the JV wins from the series regulars or the baby act when something doesn’t go his way in the JV race.

Kyle storming off, typical…but really in the minors?????? Yeah, its minors but Kasey isn’t wrong with his comments regarding the terrible infant. And for the Cupper Dillon, that GOD AWFUL whateveryouwanttocallit crap doing a dive on the grass is totally cringe worthy. WTF!!!!!!!!! Though he out grew it because he hasn’t won a race in so long now in a span of a couple of weeks a couple, my eyes need corrective surgery..Lol. He could have reinvented himself. Who told him that was o.k. or cool to do??????????????