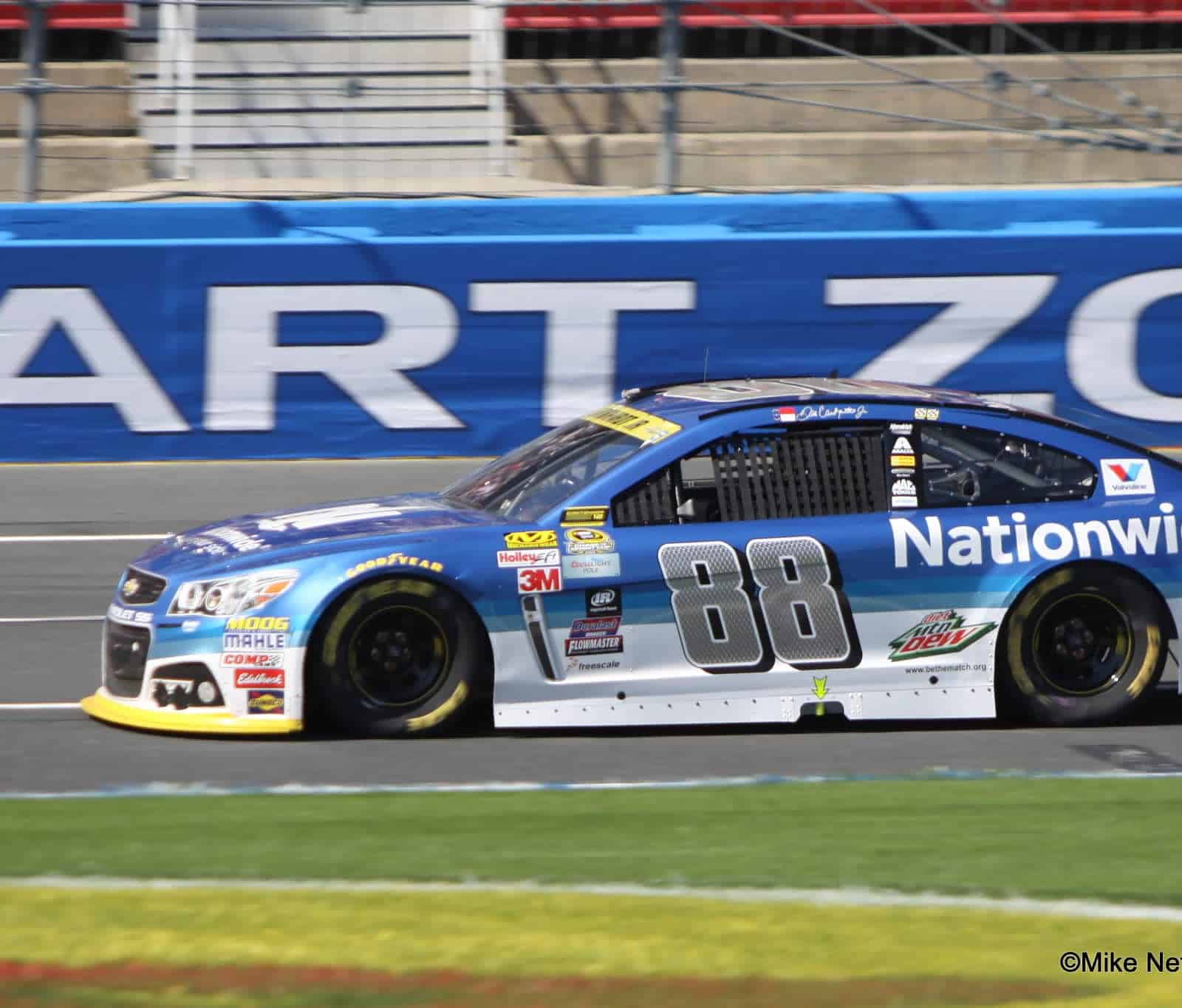 The official word may be that there was no oil on the track in turn 1 at Charlotte Motor Speedway, but the sport’s most popular driver, Dale Earnhardt Jr., adamantly disagrees and in the court of NASCAR public opinion – he is going to be judged by the fans as being right.

Since I am not a racecar driver, I don’t know if there was oil on the track or not. NASCAR said there wasn’t and Earnhardt Jr. said there was. That makes for a pretty slippery situation, and some critical words from an upset driver.

“We all hit the wall,” Earnhardt Jr. said. “I hit the wall. The No. 2 hit the wall. We went another lap. I pitted and a bunch of other guys hit the wall. There’s oil down there. It wasn’t speedy dry. I mean, I’ve raced this shit for 20 years, I know what oil and speedy dry is. So, we hit fluid, flew into the freaking wall hard. That is not speedy dry. There was oil up there. There was some shadows cast by those billboards across the track and that may have made it hard to see some oil. The No. 51 blew a hose, alright, he didn’t knock a hole in the bottom of the engine that would just leave a track of oil. He blew a hose or something that is going to spray oil and throw oil all about and up the racetrack.

“You got to get out there and feel around. Get your hands on the track and see what’s up. Shit man, guys hit the fence, what do you want me to do. I hit the f***ing wall, I know I hit oil. I hit it, I promise. I mean, I’ll argue with them all day long because I know I am right.”

Well, let the arguments begin because NASCAR’s official stance is there was no oil on the track and Richard Buck, Managing Director of the NASCAR Sprint Cup Series, said they did put men on the track looking for oil.

“We actually had men on the ground walking that high groove and they couldn’t see anything,” Buck said. “We got the reports and we looked everywhere and we did put people on the ground and walking the area where they said the oil was and there was no oil. I don’t that you say anybody misread anything. We all did our jobs. We actually had a human being protected by the truck but walking that area because we saw the groove wanting to work up that way. But we did everything we can to bring the surface back to race-able condition and I think we have an excellent record of that.

“We feel very confident there was no oil in that very top groove or down below or anywhere else.”

Hmmmmm. So, who’s right and who is wrong?

It’s obvious whatever happened to Earnhardt Jr. made his day even worse. Had it just been him to hit the wall, I might side with NASCAR, but Kyle Busch was also convinced he hit oil and Brad Keselowski slid up the track only to save his car from disaster at the last second.

By the time NASCAR threw a caution and sent out its safety crews, it was too late. Why they weren’t able to find any oil is a mystery, but this can’t happen again. If it takes a few extra laps of caution, it’s worth it to ensure nothing puts the drivers in an even more dangerous situation than driving 160 mph and hoping there is enough grip to make it through the turns.

This Chase Playoff format is really exciting, when the story of the race is whether or not the track clean up crew failed to get oil of the racing groove……guess there isn’t much to report in regards to unbelievable side by side, sparks flying, playoff racing. Maybe they can get Macy’s to sponsor next weeks race, since they have a great record for the Thanksgiving parade.

Used to go to the Charlotte race every year. Yesterday, planted a tree, watched football, followed the TA race at New Orleans where my guy finished 5th. What a nice fall afternoon.

think in the long run the tree will be far more satisfying.

Surely the squirrels frolicking through the branches will race each other for the occasional nut. That has to be more competition than today’s NASCAR offers you!

JohnQ, note I was following the TransAm race in New Orleans, not the Nascar race. Truth in advertising you know.

Richard Buck is so over his head it is ridiculous. He is a joke. Look at the inspection penalties and how they changed…what?….three times this year? When 1/2 the field wasn’t able to get through inspection to qualify at Atlanta (?) Buck blamed the teams. As certain team…er…..HMS #48…. racked up enough penalties to warrant loss of track time and pit road selection, the penalties magically changed. Track cleanup was poor, and Buck once again blames the competitors. I should expect nothing less from the same brain trust that created “The Chase” also decided Richard Buck was the best man for the job.

Poor Nascar… their most popular driver’s championship hopes could be doomed because they couldn’t get the track properly cleaned up. With Jimmie Johnson eliminated and Jeff Gordon no real threat to win the title, it’s truly hari-kari time in Daytona.

yeah cause if junebug gets eliminated in this round, they (tracks) won’t be able to give tickets away to race day.

Um…….they can’t give them away now!

It’s refreshing to see JR is still alive but…. put in perspective, he was probably given 50-100 points when the chase began and in the race was given multiple laps back so if a track crew oversight cost him some spots…big deal.

#9 RPM did not wreck in that same oil? The Ford, non-chaser non-media darling status of the RPM #9 means they can be ignored?

Interesting statements coming from Nascar. They totally BEEF’ed this, yet issues similar rhetoric to that of the recent, totally BEEF’ed, restart enforcement. If they were to step to the mic & acknowledge the mis-queue, people would not be on Nascar’s lower backs. The denial & instance that an alternate form reality exists is rational is pitiful!

Correct me if I am wrong (And I am sure everyone will jump at that opportunity) but didn’t the leaders take each other out? Jimmie Johnson had a fast car and bad things happened. Kasey Kahne had a fast car and bad things happened. Then Kyle Busch and Kyle Larson got into one another. Then Dale Earnhardt Jr. and Busch got into oil (not oil) and hit the wall. Brad Keselowski hit the oil (not oil) and barely saved the car but lost momentum. Joey Logano and Kevin Harvick weren’t the best cars in the beginning but when the best cars had disasters the race was pretty much between them. So, if bad things happen during a race to the fastest cars is that NASCAR’s fault? For the record, Jeff Gordon passed a bunch of cars all day long.

I’m not even sure Logano was the fastest car out of the ones that were still running at the end. He was just the guy out front in clean air.