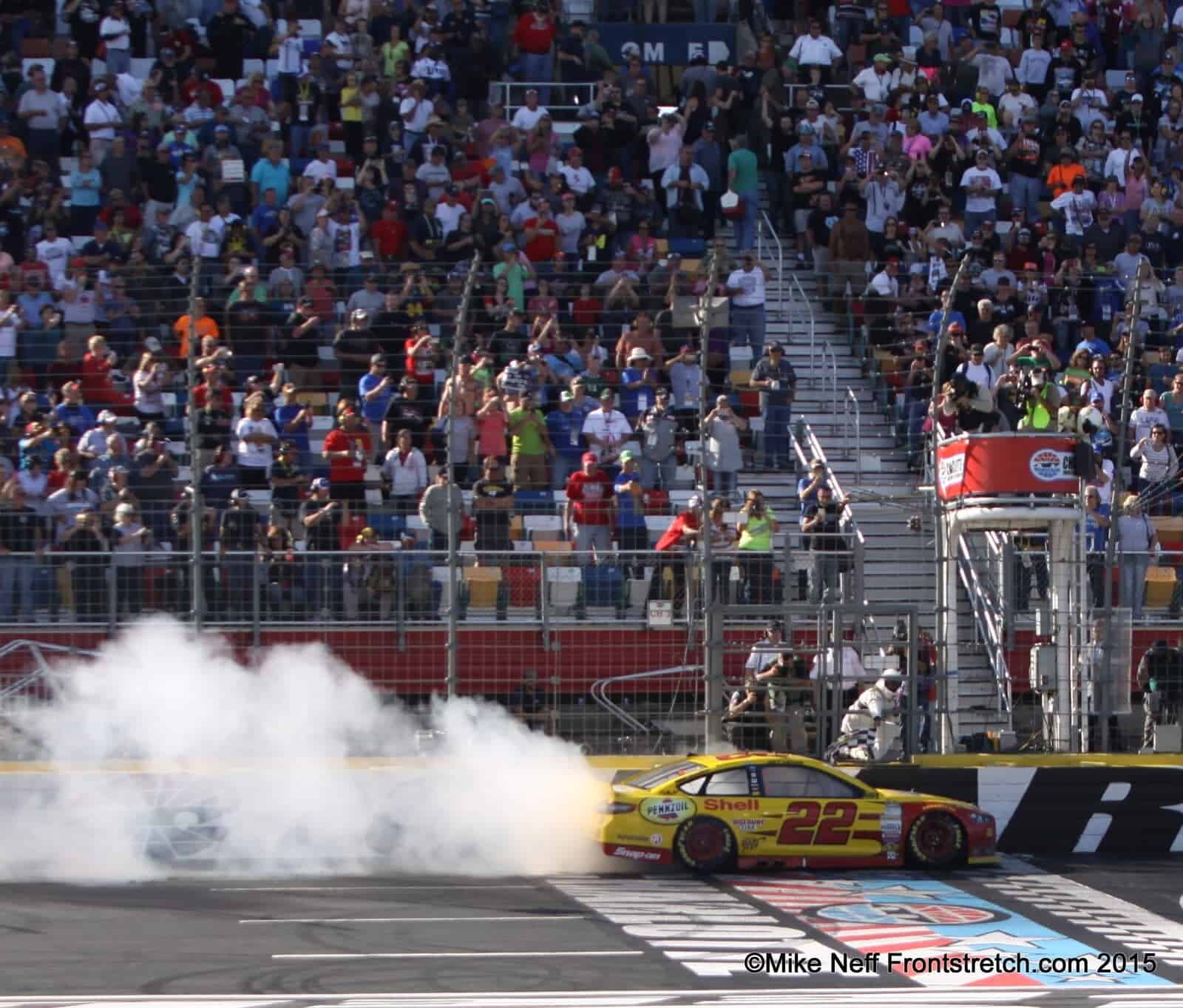 Joey Logano cashed in more than just a paycheck in Sunday’s Bank of America 500. The 24-year-old sealed his spot into Round 3 of the Chase for the Sprint Cup Series championship after dominating Sunday at Charlotte Motor Speedway, leading 227 laps to earn his fourth win of 2015.

”Our team kept their heads up, stayed confident,” Logano said. “We know we can beat [Kevin Harvick]. We know we got what we have to do over here. This is a big weight lifted off our shoulder as a team.

“You always want to win on your home turf. Charlotte is everyone’s home turf and you want to make it happen here. What a great car to lead a ton of laps.”

Along with a home win, Logano sleeps well leading into Talladega Superspeedway which will end round two of the Chase in two weeks.

“This makes Talladega way easier,” Logano admitted. “I know it’s on everyone’s minds when this round starts. Last year, I won Kansas when it was the first race of this round and now we’re able to get it this time at Charlotte.”

Logano bested Harvick, who simply got the job done one week ago at Dover, fighting his way into this second round with a clutch win. The reigning champion came home with a strong points day, finishing second, saying he was unable to pass Logano through traffic.

“I could hang with him,” Harvick said. “I would just lose him every once in a while in traffic. Just extremely hard to pass. All-in-all, we weren’t very good all weekend. The guys just did a great job on pit road. If those are the of days, well be just fine.”

Martin Truex Jr. came home third, his best finish since Michigan in August. An eighth top-five of 2015 is the most in a single season in the Chaser’s career. He heads to Kansas Speedway 12 points above the Chase cutoff.

Matt Kenseth started from pole and seemed to be on rails in the early going, leading 73 laps. However, the Joe Gibbs Racing driver got stuck in traffic when pit strategy became a factor, leading to multiple run-ins with Ryan Newman and an eventual 42nd-place result.

“I thought I left [Newman] plenty of room,” Kenseth said, “and next thing I knew I was pointed toward the fence. There is not a ton of room over there but I thought there was enough room for three of us and I just got in the right rear and put it in the wall. After that, we had a front end bent and we just finally blew a tire.”

Kenseth sits 12th in points, 32 markers behind the cutoff spot of Brad Keselowski in eighth.

“You do the best you can every week,” Kenseth said. “If this is the best I can do, it’s amazing I have a job.”

Another tough break in the JGR camp hit Kyle Busch during a Lap 195 caution when himself and Kyle Larson made contact while faking each other into pit lane. Busch would lose a lap and finish 20th.

“[My team] don’t deserve to be put in these situations year-in, year-out but we are for some reason. It’s tough and we’re going to have to battle through with what we got right now.”

Busch expressed frustration as oil left on the racetrack by Justin Allgaier caused Busch to hit the wall.

“Cant pass anybody,” he said. “Single-lane racetrack, then you put oil on the top lane to try and make anything happen. Then you put yourself in the fence. Thanks to NASCAR for cleaning that up. Every single year it keeps going the same way.”

Busch sits 10th in points, 10 makers behind the cutoff heading into a historically tough track for the JGR driver.

Dale Earnhardt Jr. had a similarly difficult afternoon, hitting the wall multiple times and running into the unattended oil, leading to a 28th-place finish.

“I lost count how many times we hit [the wall] today,” Earnhardt said. “(Contact with Carl Edwards) put us in the wall the first time and then [NASCAR] didn’t clean up the oil and we hit the wall again.”

Earnhardt now sits 11th in points, 19 points behind the cutoff.

“A lot of oil up there, they put oil, or they thought there was oil,” he continued. “I went around the speedy dry where they laid it on the track and man I flew into the fence. Ran over all kinds of fluid. I couldn’t see it but maybe the shadows were giving them a hard time to see, also.”

The 500-mile race was postponed due to rain on Saturday night. In the heat of the day, the restart zone brought drama was chain-reaction collisions populated the race’s start and restarts.

Additionally, there was many issues for drivers in staying out of the turn 2 wall. Kasey Kahne, Sam Hornish Jr., Tony Stewart, Larson and others ran into some trouble during the day in turns 1 and 2.

Though just an eighth-place finish, Jeff Gordon was upbeat of the team’s final result saying he “couldn’t be happier” with their effort.

“We didn’t even start the race off very good,” said Gordon who made his final start at Charlotte, “let alone starting 22nd didn’t help us out. [The team] made some incredible adjustments. The pit crew was rock solid on pit road. Overall, it was a great team effort. Everybody wants to be sitting there where the [No.] 22 is. That’s a great place to be, especially with Talladega looming.

“I couldn’t be happier with the entire effort that we put out there today.”

Denny Hamlin, Kurt Busch and Edwards came out with top-10 results and sit above the cutoff while  Newman’s 15th-place finish sits him ninth and six points behind.

The race saw multiple non-Chasers contend in the top five and top 10. Austin Dillon was driving off the momentum of a Xfinity Series victory on Friday night as the No. 3 Chevrolet finishing seventh,  the highest of the non-Chasers. Aric Almirola grabbed his sixth top-10 finish in 10th along with Clint Bowyer, Ricky Stenhouse Jr. and Ryan Blaney, who fought for top-15 results.

“Wow that was exciting,” said no one

No one is right Capt! Last year according to Sports Media Watch no race fell below 2.0 (pretty dismal) TV viewership. This year at least a half dozen so far have failed to even reach 2.0. The Dover Xfinicrap race charted at 0.6, yes, ZERO.6! They don’t even bother to chart the Cup World Toyota truck Series. Funny how the crack racing press hasn’t noticed.

JohnQ, food for thought. Think many of the bloggers aren’t professional writers who are doing it as a labor of love. Therefore they are looking at it through rose colored glasses. So lets not be too hard on them. Of course the “paid journalists” are a different story. They should be held accountable for their silliness.

Russ, You’re a better man than me. I can’t abide agenda journalism. If a writer is too biasesed to write the truth or too stupid to even see it that writer should be doing something else. The racing press by and large is company line PR brochure fluff or outright fabrication. Harsh I admit, but write what IS or go away! To do otherwise does a disservice to both NASCAR and the ever dwindling fan base.

No not a better man, but in my more rational moments I think back to when I loved it like they do. But, since I’ve been involved in the business side of motorsports I see it differently. There is no disservice to Nascar. The nascar we loved was a dream that we had, Camelot if you will. The Nascar that exists is a company just like any you find in any town or city. Bigger perhaps but not really different right down to the boardroom table.

Maybe they are auditioning to be the next “Dave Moody”

Kenseth got into the side of Newman earlier so I wasn’t surprised Newman didn’t back off and Kenaseth went into the wall.

It’s become apparent that there is a dearth of debris cautions near the end of races that are close to or are running past the allotted time. But they seem to find time to interview Hendrick drivers Harvick, Gordon, and Earnhardt. They already got Johnson after showing his car for lap after lap after lap after…. They missed Kurt. I guess they were out of time. They interviewed Kyle who blamed everybody else except himself for his problems. He is so predictable about shooting himself in the foot and not thinking it’s his fault. He never even passed the diva so he must have been really sulking.

Brian’s got to do some improvising on Monday morning when Mr. Hendrick phones for an explanation about no caution to help Harvick. I guess he wasn’t watching the race from the bar because they wouldn’t show it.

I had the sound muted but I imagine it was only “playoffs” all telecast long.

But did you see how close the points are, that they reset last week.
That makes me excited!
The low downforce package in 2016 is the last chance I give NASCAR