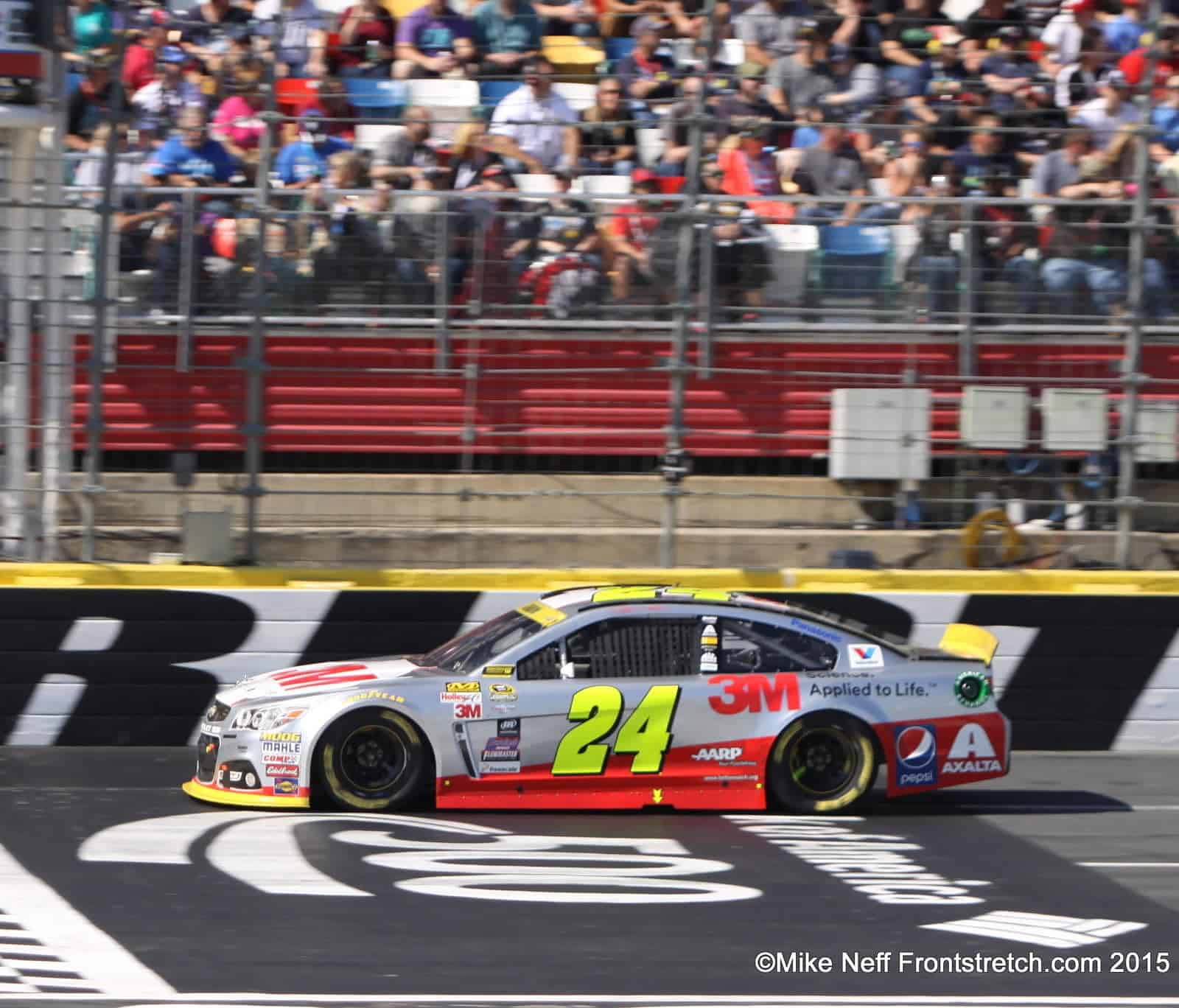 Sprint Cup Series: Gordon and His Elated Effort – A blatant fact for the 12 remaining drivers in the Chase or the Sprint Cup is the importance of avoiding issues; or in other words, the hunt for consistency.

Though no victory for Jeff Gordon Sunday at Charlotte Motor Speedway, a eighth-place finish in the Bank of America 500 leaves the five-time Charlotte winner pleased and re-charged for next week’s race at Kansas Speedway.

“Overall, it was a great team effort,” Gordon said. “I’m really happy with the eighth. The problem is, we had six of the guys we’re racing in the championship ahead of us.”

Starting lowest among the Chase drivers in 22nd, Gordon was a quiet top-15 contender throughout the afternoon. Calmly advancing with help from his crew, Gordon made his way into the top 10 with 100 laps to go, maintaining for the rest of the day.

Gordon sits eighth in the Chase standings, eight points above the cutoff with two races remaining in Round 2. – Zach Catanzareti

Xfinity Series: Cup problems highlight NXS race – In another week of watching Cup stars dominate an NXS event, instead of talking about the championship battle, the highlights were focused on two Cup drivers. Kasey Kahne and Kyle Busch got together in what was seemingly a racing incident, providing one of the few game-changing moments during the race. While that was a huge moment, it took away from the discussion about the championship, which appears to be a second thought in the minds of those covering the NXS.

With Chris Buescher finishing in the top 10 once again, outrunning reigning champion Chase Elliott, he has stretched out his lead to 26 points. The Roush Fenway Racing driver hasn’t shown the speed he had earlier in the year, but a stretch of consistent runs heading into the final few races is all he will need to capture his first NASCAR championship. – Joseph Wolkin

Formula 1: Hamilton Rules in Russia – Surprising almost no one, Lewis Hamilton won the Russian Grand Prix, extending his lead in the championship and again showcasing the might that Mercedes has in the series. His teammate Nico Rosberg may have started on the pole, but just seven laps into the race he was forced to retire with mechanical issues involving his throttle. In all likelihood, that allows Hamilton to cruise to a consecutive title.

Taking second was Ferrari’s Sebastian Vettel, followed by Sergio Perez for Force India. Perez and his team are infrequent fixtures on the podium making their result both a bit of a surprise and a welcome sight.

Kimi Raikkonen had been in position to take third, but botched it when he nudged Valterri Bottas out of the way and limped home in fifth. He was then given a 30-second penalty, dropping him to eighth. That penalty gave the constructors’ championship to Mercedes.

Sports Cars: Porsche Wins WEC 6 Hours of Fuji while Controversy Reigns in LMP2 – With the time difference in play, the World Endurance Championship’s 6 Hours of Fuji ended at roughly 4 a.m. EDT Sunday morning. Swell time to race. Porsche winning overall once again with their 919 Hybrid is a big story as they have dominated recently. Also, Dempsey-Proton Racing’s victory in GTE-Am gives the actor/racer Patrick Dempsey (who shared with Patrick Long and Marco Seefried) his first career victory in a major sports car race.

Neither of those victories were controversial. The events in the LMP2 class, on the other hand, were quite controversial. The No. 47 KCMG entry of Richard Bradley, Matthew Howson and recent Petit Le Mans overall winner Nick Tandy were leading the class points entering Fuji over the No. 26 entry from G-Drive Racing shared by Sam Bird, Julien Canal and Roman Rusinov. With about an hour to go, Bradley essentially divebombed Rusinov entering turn 1 while fighting for the class lead.  Rusinov didn’t like that too much and commenced side-to-side contact with the KCMG ORECA 05-Nissan shortly afterwards. With 37 minutes to go, the two had contact again, resulting in debris that brought out a full-course yellow. That more or less gave the class win to the No. 26, which made its final stop during the yellow.

Later, Bradley was spun out of third by the G-Drive Racing No. 28 Ligier JS P2-Nissan driven by Gustavo Yacaman, who was a lap down at the time. In the final few minutes of the race, Yacaman ran down Bradley again and gave him a heck of a time.  There was more bumping and banging. With six minutes to go, contact between the two resulted in Bradley spinning and hitting the wall, ending his day early. Since he didn’t finish the race (the No. 47 was the only one of 31 starters to DNF despite nasty conditions for much of the event), the team did not score points. Victory for G-Drive’s No. 26 gave them the LMP2 points lead with two races to go.

Afterwards, the stewards reviewed the crash and determined that Bradley had braked 37 meters earlier than normal and off-line. As a result, they blamed him for the crash and gave him an official reprimand. However, that ruling has been suspended as KCMG made additional data available to the stewards that indicated that Bradley was still at full throttle when the contact was made. For what it’s worth, Yacaman vehemently proclaimed his innocence afterwards. The appeal has not been settled as of this writing. We’ll have more on this issue in The Critic’s Annex on Thursday in the Newsletter, when the race broadcast will be critiqued. – Phil Allaway

In short the events in F1 in Russia and WEC at Fuji highlights the differences in those series and Nascar. There teams, hughly funded, with in Ferrari’s case world wide name recognition, were penalized for questionable actions on the track. Those decisions determined championships worth millions of dollars to the participants.
Can anyone imagine Nascar taking the same sort of actions? No, they may have issued some impressive sounding press release and then a meaningless fine. But then perhaps thats why they are in the decline that they are in.

I was thinking the same thing. Does anyone care anymore? If less and less people are watching the Cup series, what makes Nascar think they will be watching an even less interesting product. Cup guys winning in the minor leagues every week doesn’t do much for development, I don’t care what France says and it certainly doesn’t increase attendance, and that has been fairly obvious the last few years. At this point, you really have to wonder if Nascar has a plan at all for their future. Nascar is in deep trouble when guys like Jr, Harvick, Edwards and other big names start retiring. With 2 of them already announced, they better be prepared for a mass exodus of fans. Will be interesting to see what the grandstands look like the next 2 seasons.