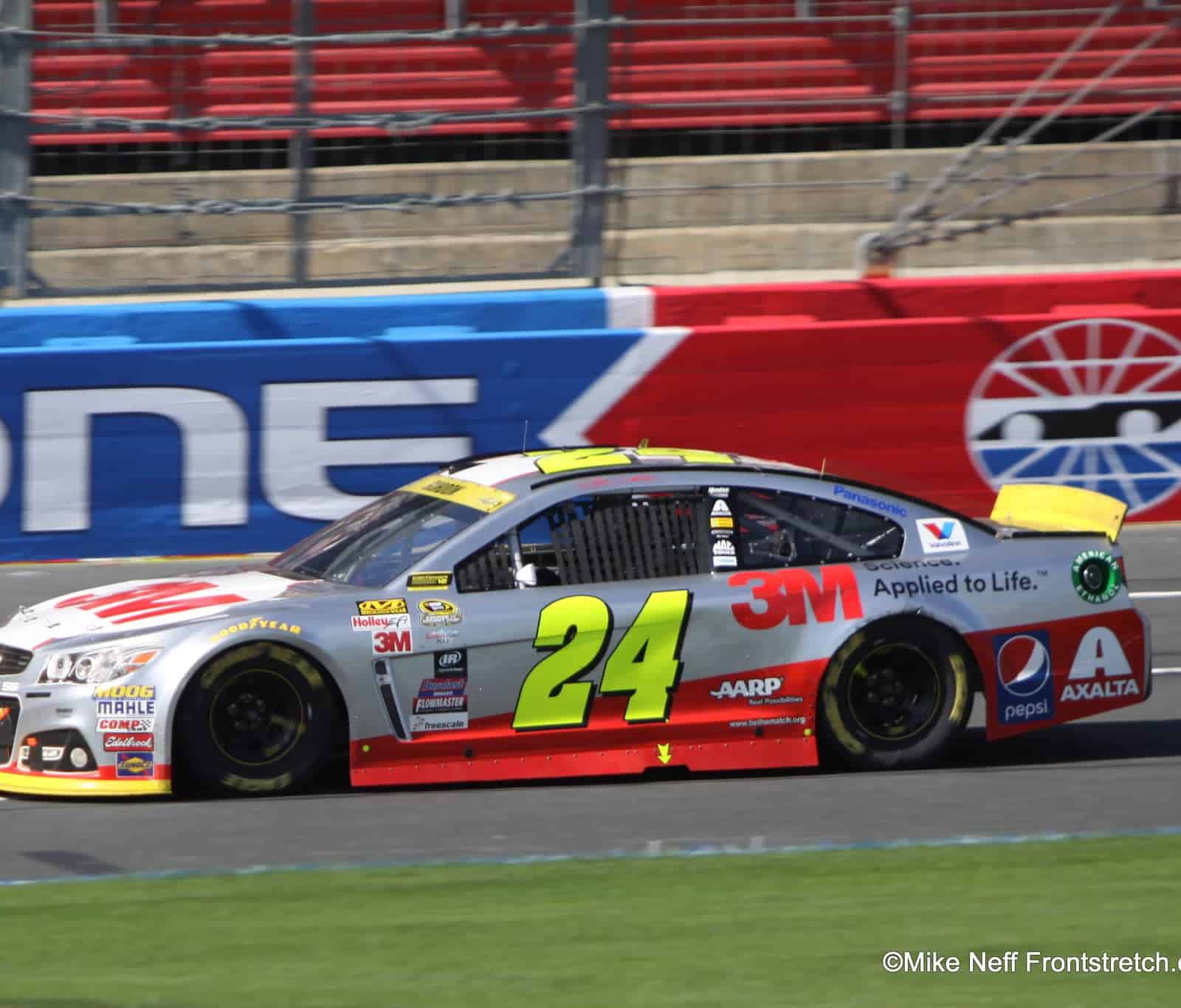 It seems like a lifetime ago (and maybe in some ways, it was) that a baby-faced kid in a rainbow-striped uniform and a cheesy mustache broke down in tears following his first career win in NASCAR’s premiere series. Jeff Gordon took the checkers at Charlotte in the 1994 Coca-Cola 600. 91 victories later, Gordon fell short in his effort to bookend his legendary career with Charlotte trophies, but he still looked a lot like the Gordon a generation of fans either loved or loathed as he took a car that struggled in practice and started just 22nd to a top-10 finish on Sunday. A sentimental favorite if not a practical one, Gordon reminded fans why there was a time when you could never count him out of a race until the checkers were in the air. There is precious little time left to see a flicker of Gordon’s heyday; then he’ll officially pass the torch to his one-time protégé as he steps away from the driver’s seat for the last time.

Another thing that deserves mention is the 12:30 start time for the race, which was once pretty standard for NASCAR.  Sunday races once started around 12:30 or 1:00 in the afternoon and were over before dinner. And 500-mile races were still over at a manageable time for fans to get home or back to the hotel or airport. Later starts benefit a fraction of the fanbase, sure, but the sport thrived with earlier times before, so perhaps it’s worth exploring.

What was scheduled to be a night race, ended up as a day race, which was something that threw teams a bit of a curveball. The last fall race scheduled as an afternoon show at Charlotte was in 2002, and that one ended up being a night race due to rain. Not many notes apply from 13 years ago, and most of the drivers haven’t raced the track during the day at all in the Cup Series. Yes, they have daytime practice data, but even then, they’re doing things to compensate for a night race.

Is that a bad thing? Absolutely not; if anything, NASCAR should be limiting tracks to one night race per year, rules package aside, as racing is generally better during the day since the need for aerodynamic grip is replaced by the need for mechanical grip, which is much more in teams’ and drivers’ hands than aerodynamics. A hot, slick track is a drivers’ track, and day races next year, if coupled with a softer tire and lower downforce, should make for some pretty good shows.

Matt Kenseth won the pole, and given the way he and his Joe Gibbs Racing teammates have run of late, that looked to be very bad news for the rest of the competition. However, tire issues plagued Kenseth after damage from hitting the wall the early in the race only compounded the problem. Kenseth slapped the wall a couple of times during the day, and the final time sent him to the garage early enough that he finished 42nd, putting the season’s winningest driver in serious jeopardy of not being able to compete for the title. Kenseth is capable of that, but so are enough others that nothing is a given.

Kevin Harvick won this race a year ago en route to the title, and he fell just short in his repeat bid, finishing second to Logano. Harvick, who had to win last week at Dover to advance as he had fallen far behind the top 12 in points, is now a much more comfortable second as the series heads to Kansas.

Kenseth may have had his tire woes, but he was far from the only title contender or race favorite to suffer problems on Sunday.  Dale Earnhardt Jr. also finds himself in early Chase jeopardy after encountering issues with both an early tire problem following contact with Carl Edwards and then oil on the track. Kyle Busch and Kyle Larson, who had both run inside the top three, tangled at the entrance to pit road as Larson made a last-minute dive to pit and Busch made a last-minute decision to get back on track. Larson, who would have missed the commitment line in any case, plowed into Busch, causing heavy damage to both cars. Larson rightfully took the blame, but the damage was done. Charlotte’s winningest driver, Jimmie Johnson, had an oil pump failure late in the day while running inside the top five. That means that three of four drivers with four or more wins are either out of the Chase already or in danger of falling out in two weeks.

Another persistent problem on Sunday was a patch of oil that several drivers were vocal about on the racetrack. NASCAR looked several times and found no problems, but several drivers said they had hit the spot, including Earnhardt Jr., who was very vocal about the problem afterward, and Casey Mears, who slapped the wall in the same area. Landon Cassill also tweeted his confirmation of the fluid in response to Earnhardt’s frustration.

I hit it too https://t.co/o6VtaPQuUW

Logano has had fast cars all year and drove a solid race, there’s no doubt about any of that. But perhaps the biggest key this weekend was that his pit crew held his position through round after round of stops, because the key to winning was clean air; even in the daytime. Just about anyone not in the front complained bitterly throughout the race about the inability to pass in traffic, and it looked Sunday as though a faster car often couldn’t get close enough to make a pass as the race wore on. It was a bit better early on, but as the day got hotter, which should have made the track less aerodynamically dependent, it only got worse.  Not a knock on Logano, who drove an outstanding race, but the reality of much of the season.


Martin Truex Jr., Furniture Row Racing: Truex said postrace that he felt Charlotte was the worst weekend the team had had, so from that perspective, a third-place finish is certainly nothing to sneeze at. With the wild card of Talladega looming, though Truex noted that he and his team take nothing for granted. “Logano is the only one who is going to sleep for three weeks,” Truex said after the race. Truex gained a couple of spots to move into third in points. He and his team have well and truly earned their way off this list and well into elite status. We’ll keep them here for the rest of the season, but they truly deserve to move on for 2016.

Ryan Blaney, Wood Brothers Racing: Blaney is fast every time he gets behind the wheel of the No. 21, but has often been plagued by issues which kept him from getting the finishes he’s deserved. This weekend, it all came together pretty well for Blaney. While he didn’t have a top-10 car, he was consistently in the top 15. This is one team for whom rumored franchising could be a bitter pill to swallow as they are at the head of the line due to the team’s seniority in the sport but it’s likely that franchise teams will be required to run a full schedule, something they likely can’t do without additional funding.

AJ Allmendinger, JTG Daugherty Racing: All in all Sunday was good to the smaller teams (note that Mears finished inside the top 20 and didn’t make this list, as almost every team on the chart finished better than they started). For the No. 47 bunch, it didn’t start off they way they hoped, but the team made adjustments and moved up the ladder later in the game.  It’s hard to say whether the No. 47 has lost a step this season or the No. 13 and others have gained one, but they’re not quite the step ahead that they used to be. Still, they’re strong and more than capable of this type of finish.