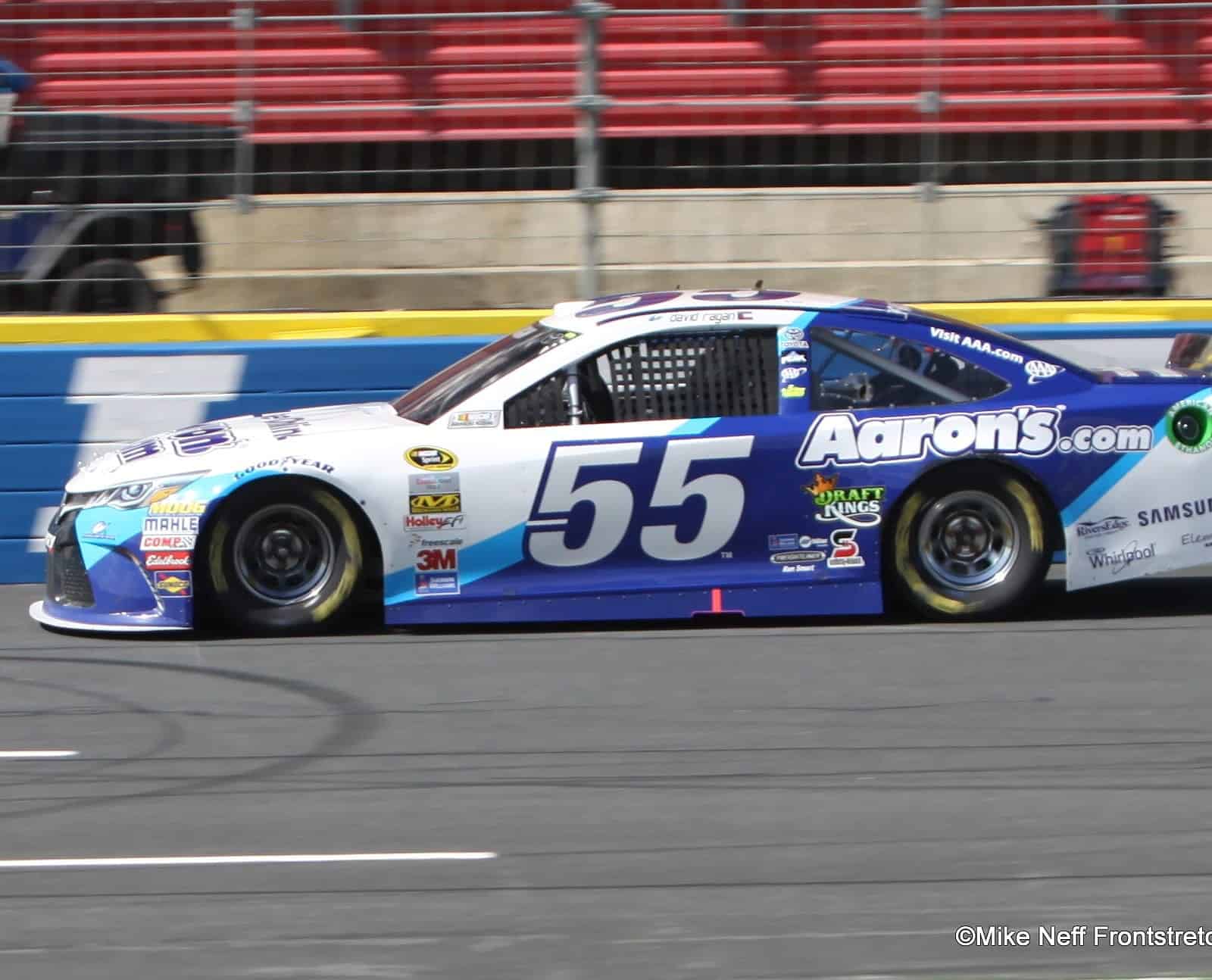 Joey Logano‘s hot rod was flat out fast on Sunday at Charlotte Motor Speedway for the Bank of America 500. The No. 22 Shell/Penzoil Ford Fusion now sits atop the points standings in the Chase and is locked into the Eliminator Round.

It’s only the first race of this round of the postseason, but already drivers 10 through 12 are fan favorites in Kyle Busch, Dale Earnhardt Jr. and New Hampshire winner Matt Kenseth. Earnhardt Jr. has already been quoted this week as saying he’s looking forward to Talladega in two weeks, a place that he’s historically had great success at (six wins in total), including his victory in May.

This weekend going into Kansas, spring race winner Jimmie Johnson (who won in a rain-shortened race) will essentially be watching from the sidelines as his Chase berth slipped away back at Dover. But you don’t have to look very far to see who might have the edge for this weekend. Over the last four starts at Kansas, besides Johnson’s win, Logano, Jeff Gordon and Kevin Harvick have all taken home the checkered flag. This race could be pivotal in this year’s Chase if Gordon or Harvick were to take the checkered flag.

Now onto this week’s NASCAR Mailbox questions, from you our readers…

Q: With the new NASCAR schedule coming out this week for the 2016 season, I noticed that Las Vegas only appears once on the lineup. Wasn’t there some rumblings that Vegas would get another Cup race at some point? Why do you think that hasn’t happened as of yet? Thanks. – Lance R., Millville, N.J.

A: Hi Lance, thanks for writing in this week. Here’s the deal with Las Vegas Motor Speedway: it’s beautiful, modern, and has more fan amenities than almost any other current track NASCAR visits in the country. The problem that NASCAR has is where do you put a second Vegas date on the Cup schedule? The problem that track owner Speedway Motorsports Inc. and Bruton Smith has is which other SMI-owned track do you pull away a Cup race from just to get another date in Vegas?

There has been talk recently that Atlanta’s days could be numbered because of poor fan turnout and the time of year the race is held, but that doesn’t seem likely anytime soon. Do you take away the early season Bristol race when temps can be near freezing and where we’ve actually seen snow in the Tennessee mountains? Or does Texas Motor Speedway, with its over 180,000 seats, need a second Cup race every year? Or does New Hampshire need two dates, when its July race consistently doesn’t sell out?

All of these things are being taken into consideration year in and year out by the powers that be at NASCAR and inside the walls at SMI to evaluate where fans want to be and how our racing product in the end can be even better.

There’s no question that Las Vegas Motor Speedway, with the Neon Garage and the other fan enhancements that have been announced for next season, is a premier venue for stock car racing anywhere in the world. When you look at the area alone, the hotels, resorts and casinos are right down the road from the track. How can any fan not like going to Vegas? It’s really a fan’s dream. I’m willing to bet, Lance, that we see SMI and NASCAR figure out a way to take a race from one of the under-performing tracks that has two dates already and move it out to Vegas within the next 3-5 years.

Q: I heard about Clint [Bowyer], Chase [Elliott], and maybe [Justin] Allgaier all moving. So what about drivers like [David] Ragan and other drivers without a ride in 2016? What will happen to them? – Jordan G.

A: Hey Jordan, thanks for the question this week. Ragan will have some options I think. He’s still a good driver and has proven he can win. He’s done it twice in his career with equipment from Roush Fenway Racing and Front Row Motorsports. Like I said in last week’s column, one possible landing spot might be Richard Petty Motorsports in the No. 9 Fusion if RPM decides to part ways with Sam Hornish Jr. following the ’15 campaign.

“I have worked hard to be a good teammate and spokesperson for all of our sponsors, and as a team we have collectively improved our performance from the beginning of the season. I look forward to staying focused and trying to win a race this season for Aaron’s and everyone at MWR. Going forward I will be working hard to secure a full-time ride in the Sprint Cup Series. At 29 years old, I feel my best years are in front of me.”

Every chance he’s out on the track and in the seat is another opportunity to impress another team owner that Ragan can be the caliber of wheelman that is needed in today’s NASCAR. While there may be others out of a ride after this year, Ragan seems to be at the top of the list as far as “higher-profile” names go. I can’t really see him getting a ride down in the Xfinity Series either, but that’s always an option, especially with younger, more marketable drivers coming up through the pipeline. This should be an interesting offseason.

I always love the phrase “fan enhancements” when talking about a track. For starters, how many of those ‘enhancements’ cost extra $? Do they make the racing on track any better? Are they just ways to part fans from more money? The only thing that matters to me is how the racing on track is. Martinsville doesn’t have ‘enhancements’, yet I enjoyed the races there immensely. I could see the entire track, had great views of pit road, and was right on top of the action. Didn’t miss having a casino next to the track or any fancy restaurants with exorbitant prices. Just give me a track that offers tight racing and good views…that’s all I need.

I think the hot dogs were considered a “fan enhancement” when they were introduced decades ago.. :)

Boy do I agree with you about the “fan enhancements” not doing a thing for the racing. Yeah that casino at Kansas has really helped the racing. hasn’t it?

Yes amenities are “nice” but if the racing isn’t great, it is a non-starter.

If those nasty-looking hotdogs at Martinsville are an “enhancement”, I’d hate to see what they call a deterent. I wouldn’t eat one of those dogs even if Scarlett Johannson offered to feed it to me.

That’s easy to say when there is no Scarlett Johannson around but I think you’d sing a different tune if that were an option.

If you count ferris wheels, bounce houses for the kids, or the walenda’s walking across tight ropes, then yeah they are fan enhancements. Have nothing to do with the on track product or your enjoyment of the races themselves.

Lets see, if I’m going to watch on TV does it matter to me whether the race is being broadcast from Las Vegas, or say New Hampshire? Probably not if I’m a fan. I’m going to watch “the race”.
Of course its location matters if I’m going to attend a race in person. Because that determines whether I can attend or not.
Since millions still watch on TV, and only say 100k physically attend a race, it probably doesn’t matter to the future of the sport. However I’m sure that the crack staff in Daytona Beach will make the right decision.

Remember Texas stole the Southern 500 in court for their second date. If Bruton wants the second date at Las Vegas, I don’t know if it’s fair.

Funny isn’t it, no matter when or where you schedule a poop flinging exhibition no one shows up.

David Ragan is the only guy that deserves the no.9 ride. Very consistent driver takes care of the car. I can’t see him going to JG for Xfinity. I would like him to Replace Stenhouse at Roush but that prolly won’t happen..ugh

Speaking of enhancements. The police tell me that one of the things that has developed at Richmond over the last several years is the number of people that come to the track, party with their friends, and leave before the race starts. Last fall they estimated that about a thousand cars left before the race.