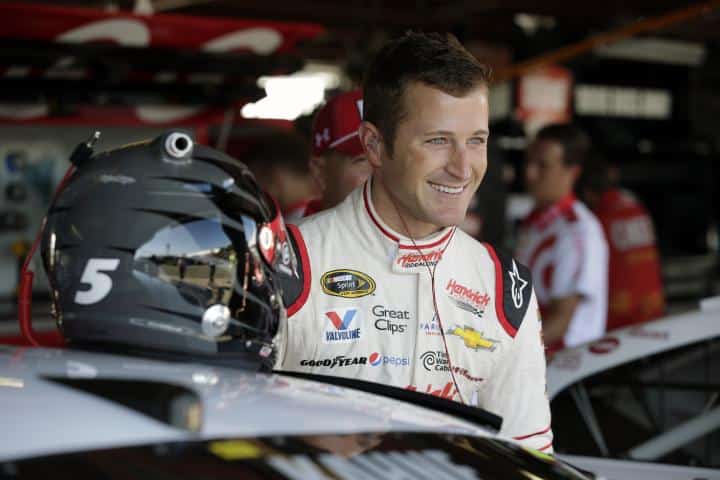 I officially became a dad at 1:11 AM to Tanner Lee Kahne. Mom and tanner are doing great. On no sleep but we can't put this little guy down

Kasey Kahne became the newest father in the world of NASCAR on Tuesday. Kahne shared the news on his Twitter page and even the name of their new son. We wish the three nothing but the best and here’s to Kahne getting enough sleep at night!

The smart way to carve a pumpkin!!! pic.twitter.com/8uFoROkZkq

One thing I haven't done in a while that I'm looking forward to while back home in KS this weekend. The haunted warehouses downtown. A MUST!

Clint Bowyer posted his excitement for the upcoming Hollywood Casino 400 race weekend at Kansas Speedway. Bowyer, a native of Kansas, goes into the weekend looking to capture his first win at the 1.5-mile oval. We also won’t be surprised if Bowyer attends game five of the ALDS on Wednesday.

Joey Logano was the happiest man in Charlotte on Sunday. Logano took his No. 22 Shell/Penzoil Ford to victory lane in Sunday’s postponed Bank of America 500. Logano posted a number of photos that included this one. Celebrating a victory sounds like a lot of fun!

No ? tonight. Gotta be sharp on the wheel tomorrow. My party alarm is set for 5pm tomorrow.

Dale Earnhardt Jr. was disappointed that the rain would not go away on Saturday at Charlotte. Earnhardt posted this tweet that he wanted a beer but couldn’t have one. It’s great to see that racecar drivers even know the importance of when and when not to have a few beers!

For those asking- What makes I-77 #WorstRoadEver ?

Brad Keselowski ran into an issue while on his way to Charlotte Motor Speedway on Saturday. Keselowski ran into some traffic and shared his thoughts and ideas on the subject. This just shows that even racecar drivers have issues with traffic jams on the highway.

Austin Dillon captured the pole before the Drive for the Cure 300 at Charlotte Motor Speedway on Saturday. That isn’t all. During pre-race ceremonies a firework malfunctioned and hit Dillon in the back of his firesuit. We’re glad nobody was hurt in the incident and everyone can laugh about it now!

Anybody wanna have breakfast in the morning? Meet me @DennysDiner at 11am tomorrow in concord. Nothing beats pancakes and autographs:)

Denny Hamlin gave fans an opportunity to have breakfast with him on Wednesday at Denny’s Diner. Hamlin even offered to sign autographs for the fans who showed up to the event. Having breakfast with a racecar driver would be a lot of fun!

David Ragan had some fun on Wednesday by surprising a young fan at his birthday party. Ragan took pictures and signed autographs for the young kid as he receives the treatment and care he needs through the difficult time. It even appears he got a 1:24-scale diecast car! We bet this kid had the birthday of his lifetime!

If you don't have dinner plans, remember that breakfast is now an option! #AllDayBreakfast starts today @McDonalds https://t.co/RQEk6vsBCb

Jamie McMurray sported a special paint scheme at Charlotte Motor Speedway this past weekend on his No. 1 McDonald’s Chevrolet. McMurray promoted McDonald’s new all-day breakfast menu on the side of his car. Now we know where we can go if we happen to oversleep!

Congrats, KK. Now put a ring on her finger…

Denny,Kyle L., Brad, and I may have missed a few. Does anybody get married any more?

nope…guess they’ve figured why the wedding when they’ll still end up on the hook for child support if they split up regardless of “ring” or not.

just a sad state of the world today.

I don’t blame these guys one bit about shunning marriage. It isn’t all what it’s cracked up to be, and I’ve been married three times! What’s that saying about “three strikes”? Anyway, I’ve always said that marriage is like the tango, where it takes two, but one has to bend over backwards to keep the dance going. For me, the last one was the kicker. Went to the Michigan race in August of 2007, and stayed until the Tuesday to see the race. Got home that evening to an empty house. Literally! My ex, or as I call her, Satan’s spawn, and her boyfriend spent the entire weekend removing everything they could! Anyone who tells me he’s getting married, I say to him, “You idiot!”, followed by the best advise, “Run!”. And if they’re still dumb enough to get married, I tell them to make sure they get a pre-nupt!

What I really want to know is, How does he keep the ride at HMS. He is the biggest under achiever to fill a seat.

Sad that another underperforming millionaire knocking up his booty call is considered NASCAR news. Just shows how little there is to talk about. There was a time when no one would brag about this. But then again there was also a time when Yates, Roush and Penske all built their own engines too.