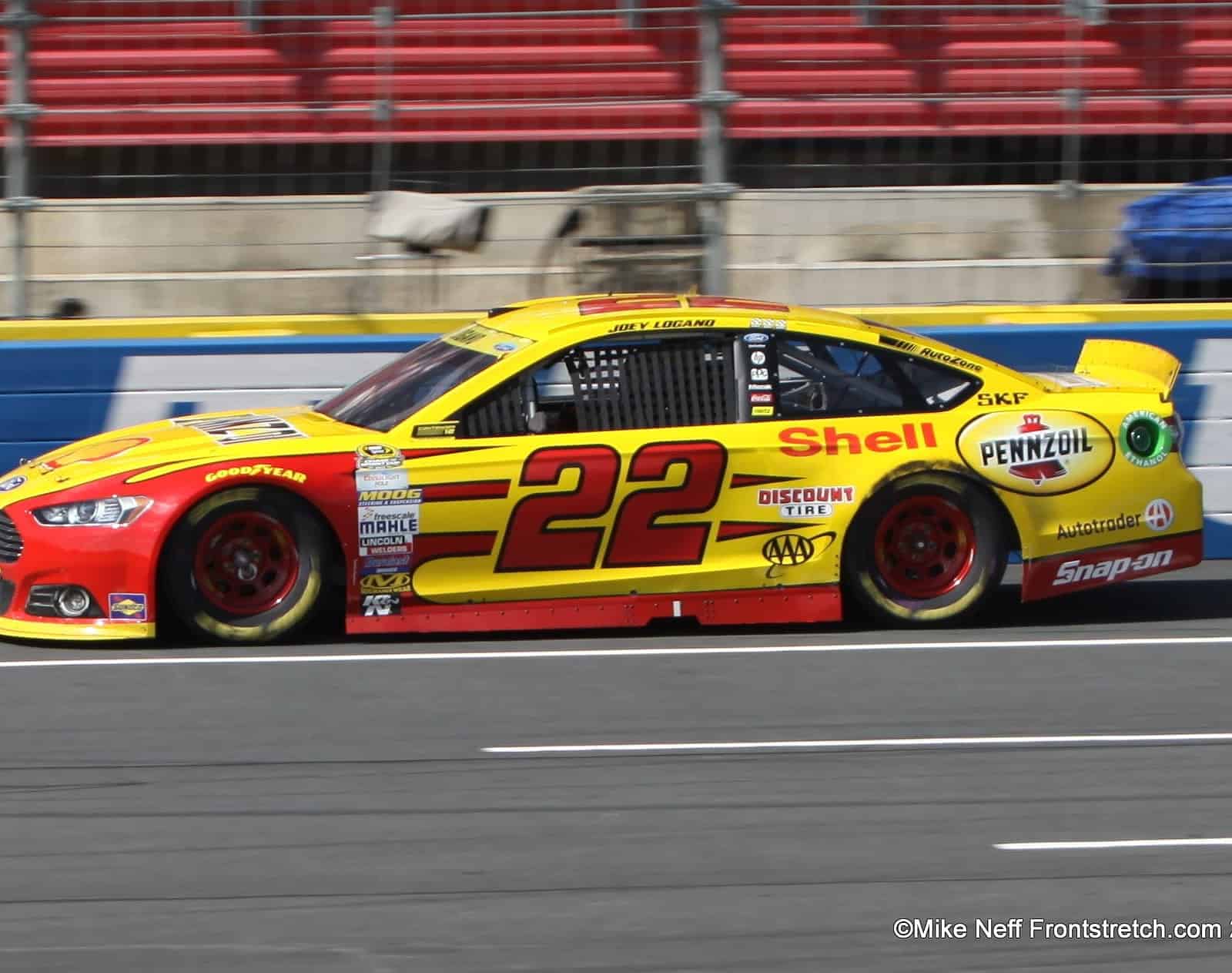 It was sort of back to the beginning again for the 12 drivers who advanced to the second round of the Chase. It just means what they did to make into the final 12, didn’t hold any water when it comes to trying to make the final eight. And already, after one rain-delayed race, there is one driver sitting pretty, some others in not too bad of a shape and yet some others who’ve got some ground to make up.

If Joey Logano walks around the Penske shop this week whistling “Don’t Worry, Be Happy,” it will certainly be understandable. The driver of the No. 22 Ford is the first to make the final eight with a dominating win at Charlotte Sunday afternoon. Logano led 227 of the 334 laps and once he got the lead when Matt Kenseth had issues, he pretty much ruled the day. Logano made it to the final four last year and now he’s just one step away from making it again. He has been one of the favorites all season and it hasn’t been just luck. Logano now has four wins and 24 top-10 finishes, tied for the most this season with Kevin Harvick. Logano is not just sliced bread anymore, he’s got the full menu in terms of being a championship contender.

Harvick couldn’t quite win his second straight race, but he’s certainly in better shape now than he was after the first race of the Chase at Chicago. A couple of more races like this and Harvick will be just fine for the final eight. Of course, the ultimate wild-card, Talladega, looms as the final race in this round, so maybe there will be some pressure for these top teams to get a win at Kansas next week because nobody will want to deal with the unpredictability of Talladega in two weeks. We all saw what Harvick did in a win or go home (sort of) scenario at Dover, so it wouldn’t be surprising if he did the same at Kansas.

Martin Truex Jr. wasn’t spectacular by anyone’s measure on Sunday, but he was super steady and you know he and his team have to be pretty happy with that third place finish. And just to prove that it’s all a team effort, one of Truex’s crewman made a key save to keep the jack from rolling out of the pit box late in the race that would have been a one-lap penalty for the No. 78 car. It’s often said that baseball is a game of inches, but this save proved that NASCAR is a sport of inches as well and it may be the difference on whether Truex makes the final eight or not.

Jeff Gordon has been had a great career and is an obvious Hall of Famer with his four Sprint Cup titles and 92 career wins. But there have been a lot of days like Gordon had Sunday, where maybe his talent to drive a car so well hasn’t been as easily noticed, yet has been remarkable nonetheless. Gordon said on the radio that his car was “plowing” and in driver terms, that means it’s pretty much impossible to drive the car fast. But Gordon plowed his way into an eighth-place finish Sunday, and, while that in no way guarantees him or gives him any kind of security when it comes to making the final eight, he stayed competitive and avoided disaster that some other Chase contenders did not.

It was disappointing to hear this week that there will be no significant changes in the Sprint Cup schedule for 2016. While the official schedule has yet to be announced, we’ll just take it to mean a few things. First, it means the tracks in the Chase will remain the same. That’s particularly disappointing because it likely means that places like Chicagoland and Kansas will remain Chase tracks, and really, those are two places that struggle to produce exciting races. It also means no Bristol and no road course (wouldn’t that be interesting). We can only hope the new rules package will help at these 1.5-mile places next year, but I’m not apologizing for a wait and see approach here.

Maybe Kyle Busch will be the comeback kid once again. Busch was having a pretty good day when he and Kyle Larson collided near the commitment cone to come onto pit road. Larson was unsure of what he was doing and admitted it was a mistake. Busch was going to fake going into the pits and stay out. Instead, the damage from the incident put him a lap down and he finished 21st. So, it wasn’t a complete disaster for Busch, as he is just 10 points behind eighth-place Brad Keselowski. But much like it was in the opening round of the Chase, Busch will have to come from behind again to make the final eight.

It took just one bad day for Kenseth to go from first to last. Kenseth started on the pole and was strong early, leading 72 laps. Then an issue on pit road cost him track position, and then things just got worse, and by midway through the race his car looked more like it had done battle at Bristol rather running at Charlotte. Kenseth eventually ended up finishing 41st. He is now 32 points behind the eighth-place Keselowski, so he will basically be in win at all costs mode at Kansas, and if need be, at Talladega. But just like Harvick at Dover, Kenseth is capable of winning anywhere anytime, so don’t count him out yet.

It’s been a rough second half of the season for Hendrick Motorsports cars and the latest example of that came at the expense of Dale Earnhardt Jr. Sunday. Junior wasn’t superfast, but when he and Carl Edwards touched, it put Junior into the wall and cut a tire. That was just the start of a pretty miserable day for the No. 88 and Junior even said he lost count of how many times he hit the wall at Charlotte. So, now, he too finds himself in a hole, 19 points behind Keselowski. Earnhardt won’t be quite as desperate for a win as Kenseth, but he will need back-to-back top-five finishes to have a chance to advance. And, with Earnhardt’s previous success at Talladega, he may be the only driver who wouldn’t mind having the pressure of needing a win there to advance.

So this is a Chase edition of “Who’s-Hot-Who’s-Not”? Like the rest of the media the focus here is solely on the Chase drivers? Wonderful. Good work.

HOT…..whoever made the decision to add NASCAR to their sports programming.
NOT…..the NASCAR Braintrust in Daytona
Honorable Mention NOT……Danica, just for the hell of it.

I don’t think he got a raise.

How do you word this under “accomplishments’ when updating your resume?