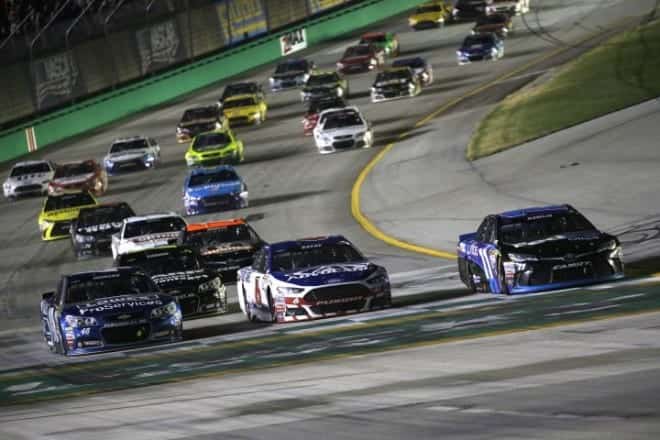 NASCAR’s Sprint Cup Series rules package for 2016 can be summed up in two words: low downforce.

On Wednesday NASCAR announced it will utilize the package previewed in 2015 at Kentucky and Darlington speedways for every race in 2016 with the exception of the restrictor plate races at Daytona and Talladega.

The package was met with rave reviews by drivers, crew members and fans, who commented that competition increased during the races.

The package will include a 3.5-inch spoiler, a 0.25-inch front leading splitter edge and a 33-inch radiator pan.

In addition, changes to the 2016 package include adjusted rear gear ratios to maintain 9,000 rpm maximum engine speed and a 1.38 third-gear ratio for tracks measuring less than 1.25 miles. Digital dashboards will become mandatory, as will a new fire suppression system, right-hand side air duct and improved safety belt restraint system.

“NASCAR has worked tirelessly with our teams, drivers, manufacturers and Goodyear to develop a rules package that provides fans with the best racing possible,” said Steve O’Donnell, NASCAR executive vice president and chief racing development officer, in a press release. “The success of the races at Kentucky and Darlington in similar trim proved extremely valuable in accelerating rules development for 2016. Now, as teams have even more time to prepare and a strong baseline of data, we anticipate the racing to be even better.”

The success O’Donnell spoke about can be attributed to the lesser amount of downforce on the cars when they used this package. With less aerodynamic influence, drivers were able to pass more easily and control the car more.

NASCAR partner Goodyear will create a new tire that has more fall-off, which will slow the cars down even more in hopes of creating closer and more exciting racing. Goodyear brought such a tire to Darlington this summer and drivers ran seconds slower at the end of a run than they did at the beginning.

The rules package will be modified slightly at each track, with tire combinations and drive train configurations being tweaked.

“Our team at the NASCAR R&D Center is constantly looking at the racing, and evaluating ways to continue to improve it,” O’Donnell said. “Using science and technology and qualitative data compiled from world-class engineers throughout the industry as our guideposts, we will always look to make the racing better for our fans.”

Good, this is what everyone wanted. I look forward to next year and seeing this package at places like Dover and Charlotte that have become snozzer tracks. I hope this is the first step to further reducing areo-dependance on the cars (get rid of the splitter next).

It’s a good step in what I consider the right direction. Let’s see what next year brings. If we get really lucky maybe they will start to let teams make changes to the suspension, engine, and gearing!

Mixed bag. Glad they are going with lower downforce but wish they had gone much, much further than using the Kentucky/Darlington package. Also, wish they had used that package for the Chase. It would have given them a much better idea of how things could go if they further reduced downforce. Oh well. Better than the junk they’ve run for 2015.

Despite tinkering with all the rules its still //NOT//A//CAR!

I will reserve judgement until I see how it works race after race. However I suspect, that in the long run the status quo will return.

this will not fix anything…
bla bla bla low downforce… rahhh rahhh rahh.
we control the shock package, the gear ratio and the ride height.
bla bla bla
i only have two words…
ship…
sailed…

I am glad they are trying something to make the racing better but my gut feeling tells me that it won’t make that much difference overall. I guess we’ll see.

I’m glad that NASCAR finally (and probably reluctantly regardless of those fine words from ODSteve) decided to make a change from what was obviously a failure to launch with the 2015 rules package. They should have done it sooner.

As others have said, we’ll have to see if it really makes any improvement in the overall racing.