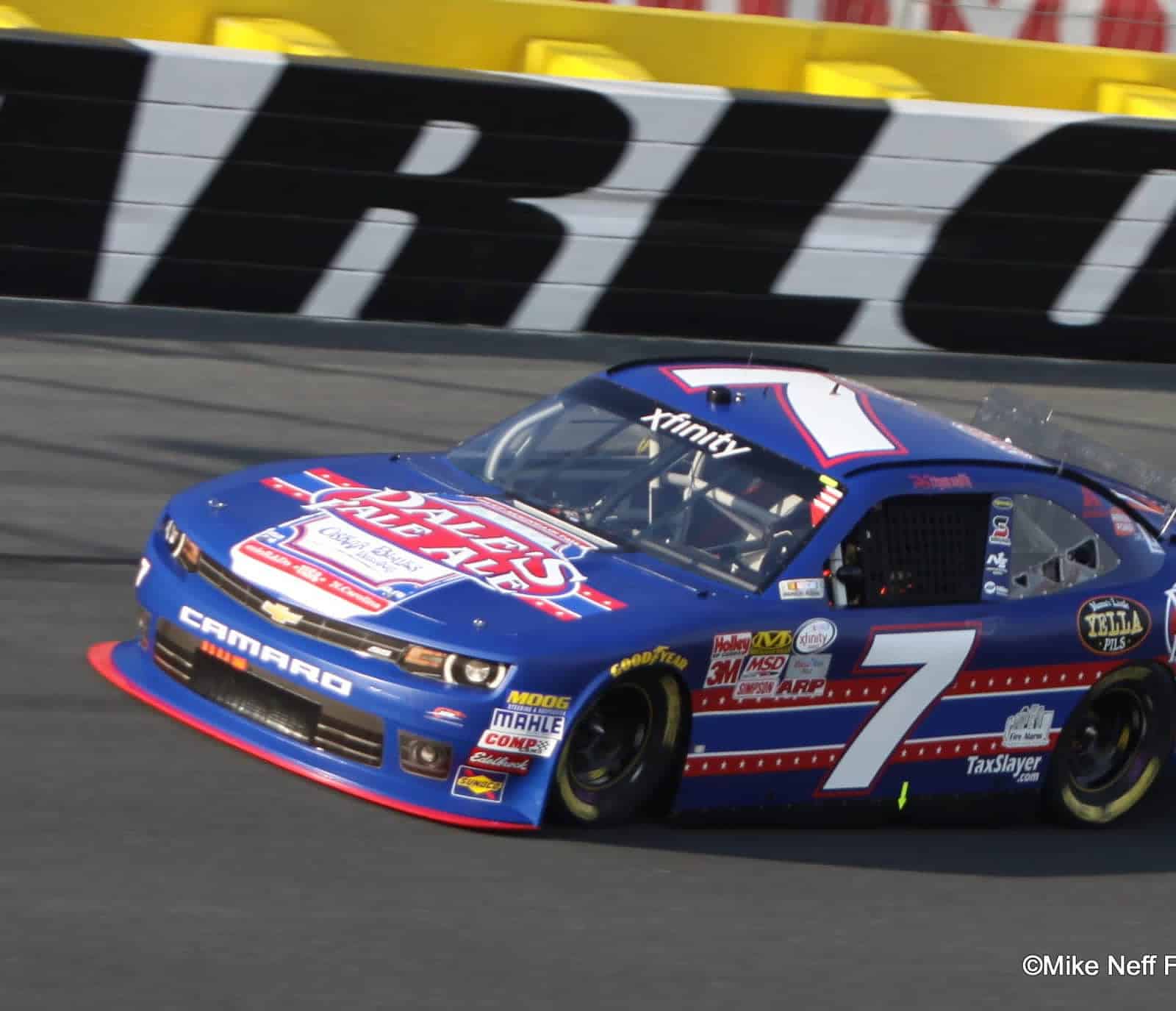 Regan Smith is the elder statesman at JR Motorsports, paired with “young gun” and reigning Xfinity Series champ Chase Elliott. This year, though it’s the old dog teaching everyone else new tricks, currently sitting third in points just 34 behind Chris Buescher. Smith finished fifth on Friday night and gained two points on Buescher, keeping the momentum of nine straight top-10 finishes intact. Can he close the gap on the competition with four races left?

At Charlotte, Smith sat down with Frontstretch and talked about those title chances along with his focus for the remainder of the season with an uncertain 2016 ahead. He also dished on his favorite music, hobbies away from the track and his passion for hockey among other topics.

Mike Neff, Frontstretch – A couple of weeks ago it seemed like you were of the mindset that you were out of this championship chase. However, after your win last weekend you are certainly back in it, if you were ever out of it. How do you feel about your chances?

Regan Smith – I don’t know that any of us had the mindset that we were out of it. We have the mindset that we want to just go win races. That is still our mindset. A lot of things have to happen right for us to be as close as we need to be when we get to Homestead. The one thing we know we can do, if we win the next five we will win the championship. Our mission is to go out and do that. If we don’t do that, we have to finish second, if we don’t do that, we have to finish third and so on. We’ll let the rest of the cards fall where they may.

Neff – It has been up in the air about what you will be doing next year. Do you have anything you can share with us about your 2016 plans?

Smith – Nope, just working hard on 2016. The main thing is I’m focused to finish off 2015 strong. It isn’t every day you get the chance to get to the championship at this point of the year. We’re going to zone in  and focus on that.

Neff – We know you are a hockey fan. Is that your number one favorite pastime outside of racing?

Smith – That is a toss up. I like hockey but I like football as well. I think they go neck-and-neck for me. The hard thing for me is the hockey season is so long I have a hard time really diving into it and seeing what is going on until around the Christmas holiday and right around that break but I certainly enjoy it.

Neff – You are from New York. Is it Islanders or Rangers?

Smith – Neither, I am a Hurricanes guy. Hurricanes all the way. The Avalanche would be a close second. We still have a place out there and we get to their games whenever I can.

Neff – There was a rumor you did a Hurricanes appearance a week or so ago, doing slapshots and other hockey-type skills. Were you brave enough to get on skates while you were doing it?

Smith – No, I stay away from skates. If you put me on skates I look like a cat getting stuffed in a water bucket. All four legs fly out and it isn’t pretty. You’d think, being from New York I’d know how to skate, but that is the last thing I know how to do.

Neff – A cat stuffed in a water bucket is a visual fans will have forever. Talking about hockey, what is your favorite website for hockey coverage?

Smith – Probably Hockey Buzz is the one I go to quite a bit. Hockey Fights, too although they have tempered the fighting part of the sport. I still go to it, but I go to Hockey Buzz more these days.

Neff – Outside of racing do you hunt, fish, snowboard… what is your passion away from the track?

Smith – I do all kinds of different stuff. It just depends on the week and the mood that I’m in and what I feel like doing. My problem is I’ll do something long enough to where I get OK at it but then I won’t keep going to be great at it. I’ll just taper off and the next thing will come up. My ADD kicks in easily. I enjoy a lot of stuff. Snowboarding, video games, golf… you name it, I enjoy it.

Neff – What is your favorite type of music?

Smith – It is a toss up. I am a hard rock guy. I have a lot of friends in hard-rock bands. I enjoy getting out to their shows whenever I can to go see them. There is always that and… on top of that, country. I listen to a lot of country as well.

Neff – What is your favorite Dale Jr. story that you can actually share?

Smith – There are a lot of them. I don’t know which one of my favorites that I can share. I am certainly fortunate to have a boss like him that I can hang out with and have fun away from the track along with having fun at the track.