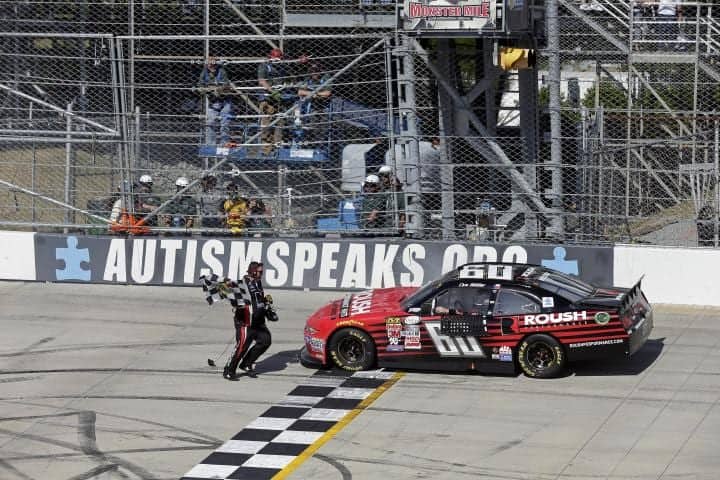 There are just four Xfinity Series races left in the 2015 season. Come Homestead in just over a month, a first-time champion will be crowned. Currently, it’s a four-driver race for the title, although Chris Buescher holds a healthy 18-point lead over Ty Dillon. Buescher, while not controlling his own destiny, likely needs to finish within four to five positions of the No. 3 car each week to lock up the title. Along with Dillon, reigning champion Chase Elliott and teammate Regan Smith are both within striking distance, although Smith will likely need to win at least two of the four races left to have any shot at closing this 45-point gap.

Which one of these drivers will emerge on top? Let’s look at five keys down the stretch each one will have to manage in order to hoist the season-ending title trophy at Homestead. …

Let’s face it; the harsh reality this year is that Cup drivers are dominating NXS victory lane. Just five of the 29 races this year have been won by our top four title contenders; only Smith and Elliott have won in the season’s second half. With each of the four remaining races littered with Cup competition, it’s top fives and top 10s that will determine who holds the edge in this title chase.

However, the “c” word of consistency is one the point leader has struggled with at times this year. Buescher, despite two victories, has only 19 top 10s, a total which is actually ranked fourth in the division. It’s reigning champ Elliott, sitting third in points, who leads the NXS in that category with 23 (three shy of his mark in 2014). Smith has also been running strong, putting forth a streak of nine straight top-10 finishes along with two wins (Mid-Ohio and Dover).

So can the JR Motorsports duo use that momentum to catch the top two? Only if their rivals stumble just a little bit more than they have been. Dillon joins Buescher in perhaps the most important “c” word statistic, zero DNFs while Buescher, despite his early-season rollercoaster is riding a streak of seven top-10 finishes all his own. If each one avoids that other “c” word – catastrophe – in the form of wrecks and mechanical failure, no amount of top 10s by Elliott and Smith can stop them.

A clean pit stop is key to a solid finish. Buescher has seen a few difficulties on pit road including an incident at Dover that nearly took away his shot at a solid finish. In a season where track position is critical avoiding speeding in particular is a must. Getting sent to the end of the longest line, the penalty for that pit-road infraction under yellow could cost each championship competitor a dozen spots or more, easily enough to tip the scales on this competition.

The contenders are pretty squeaky clean on penalties. While NASCAR doesn’t keep tally of pit-road penalty statistics, no one has had major hiccups since Elliott all the way back at Watkins Glen. Still, multiple speeding penalties occur each week and the pressure of the championship could easily lead to mistakes.

For Dillon, Elliott and Smith, this season might be their best bet to win a championship. With Buescher’s rather comfortable lead, any one of the next four races could end on fuel strategy. Why not risk it all? Bold calls, for whatever reason have not been seen much in the NXS these days, truly disappointing since they often produce new winners. Just ask John Wes Townley what it feels like to stay out a few extra laps on gas. Races at Kansas and Texas should be light on cautions, creating a potential opportunity for a long green-flag run, and the different strategies that result.

Even late-race cautions can generate different options on top of the pit box. If it comes down to two tires versus four, one – if not all – of these guys needs to test their ability and take two in at least one event. Why not? What do they have to lose? It is all or nothing, right? Say if two tires was the wrong call, at least it is better than sitting “comfortably” in 10th without a shot at winning.

Yes, we know this stat is hard to beef up with Cup drivers running every week. It won’t be easy with Kyle Busch, Austin Dillon and whoever is in Team Penske’s No. 22 car dominating every race. It gets repetitive, but when a guy like Buescher can lead 108 laps at Bristol – one of the sport’s toughest tracks – it provides a new level of excitement for fans when it comes to the championship battle. More importantly, it gives a team confidence moving forward. Whether it’s during a cycle of green-flag pit stops or staying out under yellow-flag conditions collecting that extra bonus point any way possible is crucial.

Buescher leads all four contenders with laps led (263) but hasn’t been out front since Bristol. Elliott has led the most races (10) but it’s Smith who’s been in Victory Lane most recently, pacing the field for 80 laps at Dover. Looking ahead, Smith is also the only title contender with a victory in these final four events, taking the checkered flag at the Homestead season finale in 2012. That confidence in past results should serve Smith well considering he’s facing a “win or else” scenario.

At the end of the day, we all just want to have fun. Each driver needs to stay loose, go out there, enjoy what they do and try pushing the pressure of the championship out of their heads. As one driver recently told me: “You just never know when it can be all taken away from you.”

Smith, more than anyone could be feeling the pressure here with an uncertain future for 2016. Elliott and Buescher, by comparison remain secure while Dillon will forever be funded by grandfather/owner Richard Childress. Still, whichever driver stays the most relaxed will be the least likely to make a mistake; all it takes is one “boo boo” to make the difference in this version of NASCAR’s point system.

I’ve thought for a while now, anyone in the Xfinity top-4 has a fighting chance, though Ty, Smith and Chase would need something to happen to C Buescher. Guess the guy that wrote this does, too. Ty and the JR Motorsports drivers are guys I like, so I’d be happy if any of them won it all. However, I won’t be mad if Chris beat them.

Joseph, I’m curious. Are you lying to me, yourself or both of us? Given that the Xfinity series is structured such that every week Cup drivers take 1st through 6th places it is an outright delusion to crown the series regular that finishes 7th the most frequently Champion. Champion of what exactly? That attendance is nonexistent and Sports Media Watch hardly bothers to track TV viewers indicates that the fans all realize that the Xfinity series is not even legitimate competition. So again, are you self deluded or just disingenuous?

Thanks John for saving me from typing everything that you just said. At this point they should just give every all the Xfinity drivers “Participation Award” ribbons.

And a years supply of “Turtlewax”.