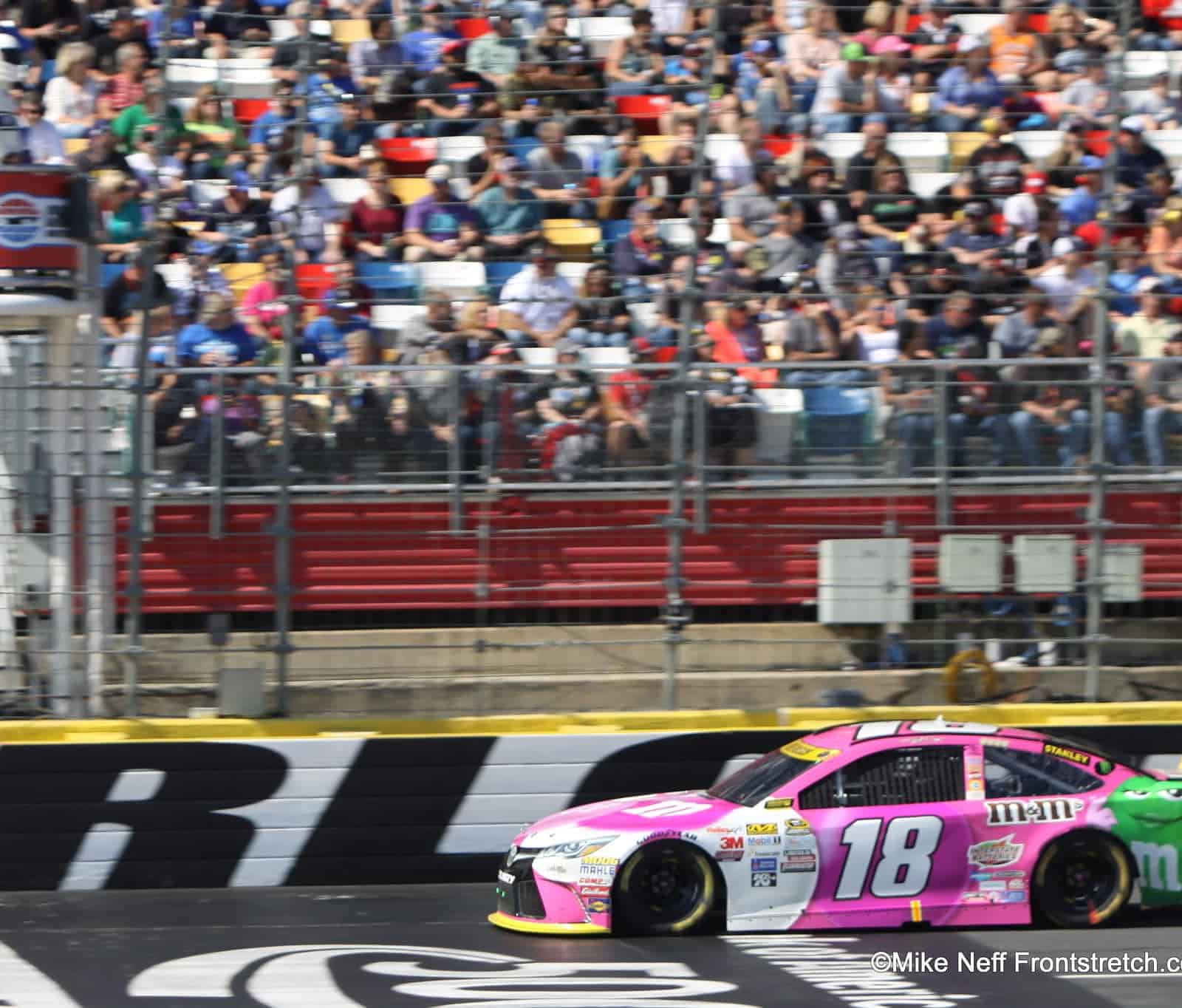 1. Should Kansas be overlooked heading to Talladega?

In fact, if you have forgotten about this weekend’s race at Kansas shame, shame, shame on you. Still hot off a repave in 2012, this intermediate has come into its own as one of the series’ best. The 1.5-mile oval has become a center of misfortune, producing an absurd 62 cautions in its last six races and causing more drama in the Chase field than any other track.

After witnessing major shakeups at Charlotte Motor Speedway last week – a relatively dull, spread-out event – there are countless ways Kansas can influence another notch of the Chase Sunday. Just look at what happened last year; wrecks for both Jimmie Johnson and Dale Earnhardt Jr. put them in “must win” situations heading to the Talladega race that ultimately kept them from moving into the next round.

You might say some drivers are in a “must win” situation already. Matt Kenseth is among the best on 1.5-mile tracks in 2015, but is in a taxing situation in points following Charlotte. Additionally, Kyle Busch, Ryan Newman and Earnhardt are all going to be wrestling for what could be just one guaranteed spot left to slip into the Eliminator Round.

For some, Kansas being one week from Talladega makes it no more than a build-up race to the one that will really get the drivers moving. But even that philosophy should lead to a more aggressive, intense event on an intermediate than usual. In my eyes, being one week out from a race as unnerving as ‘Dega will only further push the Chase drivers to “get it done now” or face the unpredictable fate of the 2.66-mile hippodrome.

Kansas is also known for spicy restarts and having many races decided on pit strategy. Heck, Greg Biffle was the third car across the finish line once and still wound up winning the race. As once said by legendary comedian Jim Carrey, “People need motivation… human beings don’t learn anything with desperation.”

Indeed, the 11 drivers in the hunt for seven remaining spots will learn a thing or two in these desperate times; expect their “education” to ramp up the energy at Kansas.

2. Can the Busch Brothers bring it home at Kansas?

It’s a well-known story that Kyle Busch doesn’t like Kansas. It has nothing to do with the city, just the 1.5-mile racetrack whose garage area seems to have a funky obsession with the driver of the No. 18 Toyota. Busch’s final results have been abysmal there, posting finishes of 28th or worse six times in 15 starts – three of which came in succession from 2012 to 2013.

His older brother Kurt is also not a Kansas fan, finishing in the top five just once and having seven finishes of 25th or worse in 19 career starts there. At least in his case, the 37-year-old Kurt sits in a relatively steady spot in points, 10 markers above the eight-man cutoff for the next round. In my eyes, he also is displaying strong enough results to continue unless he suffers the ‘Dega disaster every driver fears. Even a 20th-place finish or so is one Busch can survive heading into the following week.

With Kyle, however, sitting 10 points back of the cutoff this race could be what makes or breaks the Joe Gibbs Racing driver. It’s also a test of how much the young man has matured, for if there is one thing we have learned from Kyle Busch this year, it’s his ability to reach seemingly impossible goals while under pressure. The four victories in the heat of the summer not only put Busch in the 16-man Chase, it granted him the proper bonus points to advance to round two despite a bunch of stumbling blocks encountered during the first three playoff races.

Busch’s comeback story has been fun to watch following those devastating Daytona injuries. However, many have questioned if he could keep the ball rolling once the Chase starts, and that clunky first round performance gave credence to their concerns. Historically, this time of year is when the mistakes begin for Kyle Busch and the issues boil ’til the oven runs out of gas. In the past, as soon as he was in the championship conversation, he was out, with career years like 2008 (eight wins) turning into bitter disappointments long before Homestead.

Can this year be different? Sure it can, but it must start at Kansas with a strong, decisive drive by Busch to get in solid position for Talladega.

3. Who will fall and who will gain in Chase points?

Boy, who knows nowadays. The current playoff format has justified itself in giving birth to unforeseen shakeups and swift, eye-opening drama in only its second year being used in the Sprint Cup Series. Even at mellow tracks like Charlotte and Chicagoland, the biggest of names have run into issues one way or another.

Kansas meanwhile has established itself as an unknown for many drivers and teams. As previously mentioned in question No. 1, the track’s caution rate has nearly doubled following a major repave to the track in 2012.

The Chasers will be in for a resilient battle, and one that sticks out for me in the “gain” category is Kenseth. The two-time track winner is in the worst position among Chasers, sitting 12th and a lusty 32 points behind the cutoff of eighth.

Just a couple weeks ago a popular accord among fans, media and fellow race teams was placing the 43-year-old atop the list of those to beat at Homestead for the title. Now, after one disastrous week at Charlotte to start the Contender Round, Kenseth is in trouble. The JGR wheelman will have to rekindle his 1.5-miler pace and either grab a win on Sunday (and sleep easy at Talladega) or get a strong top-five result on Sunday and have a chance to perhaps sneak in on points should mayhem ensue next week. In my eyes, you can bet on Kenseth getting his victory, similar to the way Kevin Harvick fought back from a near-knockout blow in round one. This type of adversity is how you separate the contenders from the pretenders.

On the flip side, a couple drivers who can fall in points come in the shape of the previously mentioned Busch brothers of Kurt and Kyle, drivers who combine for only two top fives in 34 races at Kansas. Jeff Gordon and Brad Keselowski, meanwhile, could go either way. Both have prior victories at Kansas, flexing their muscle there, but haven’t displayed championship-level speed as of late.

4. Can Ryan Newman pull off the upset?

Following 2014, the phrase “Newmaning” was born. In doing so a driver makes the Chase, survives through the rounds with pure old-fashioned consistency, and comes a couple car lengths from a Sprint Cup championship – all without a trip to Victory Lane.

Coming off that upset, Newman is in the same boat once again in 2015, posting no wins, five top-five finishes and just 19 laps led on the year. He’s also in a not-so fond position in points, sitting ninth, six markers behind the cutoff currently occupied by Keselowski.

Can the trajectory of the No. 31 team change this weekend? Newman’s career performance at Kansas Speedway started with a bang, capping off two runner-up finishes with a victory in ’03, the track’s third year of existence on tour. Shockingly, the early roll came to a standstill as the 37-year-old has failed to finish in the top five since and has only two top 10s scored in the last nine races.

Additionally, Newman’s chances for winning in ’15 have been in a state of gloom, as the No. 31 Chevrolet has but one top five since Bristol in March. Alas, consistency has come to the rescue, and that’s one reason why he’s in my back pocket for Sunday. The last two races at Kansas have seen top 10s for Newman, a driver who has finished worse than 20th once (once!) in the last 19 races.

Clearly, numbers like that should be rewarded points-wise, and in a Chase format like this one, it will be. However, how does simply “putting himself in position” make Newman a possibility for winning on Sunday?

One word: drive. According to a rival Sprint Cup car owner, Brad Daugherty, Newman is “harder to pass than a kidney stone.” Those drives he put on at both Phoenix and Homestead last year backed up that statement. Under these stressful circumstances, should the team provide its driver with solid track position, Newman is one to watch to put up the next clutch Chase performance.