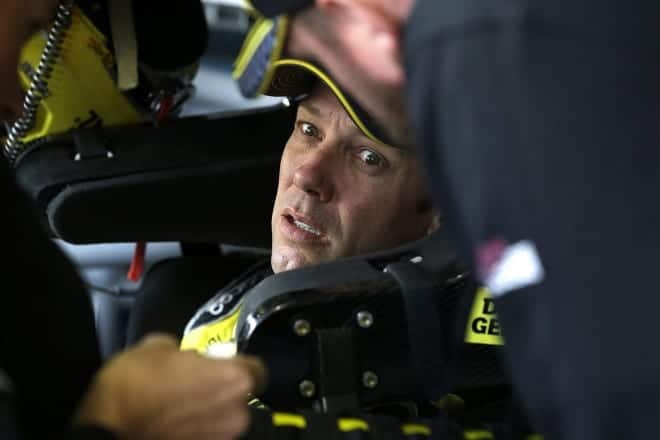 Kyle Busch laid down blistering fast laps in all the first two rounds of qualifying for the Xfinity Series Kansas Lottery 300 this afternoon at Kansas Speedway. But when the final group of 12 drivers went out, it was Matt Kenseth who held the edge. With a lap of 184.906 mph, Kenseth will start his No. 20 Toyota alongside points leader Chris Buescher to lead the field to green.

Regan Smith and Kyle Busch will start side-by-side on row 2 and Ty Dillon, who currently sits fourth in points, rounds out the top five. Daniel Suarez, who narrowly missed making a second run in the final round of qualifying, starts sixth, followed by Kevin Harvick and Brendan Gaughan. Austin Dillon and Joey Logano rounded out the top 10.

With just over nine minutes remaining in the first round, BJ McLeod slid sideways through turn 4 and into the infield grass, stopping the session to check the track; McLeod will start 29th. Meanwhile, Cale Conley made his way into round 2, but the team found a hole in the radiator and he was forced to sit out the remainder of qualifying; he did not post a speed in the second round and will start 24th.

Defending series champion Chase Elliott made it through to round 3 but spun coming off of turn 4 and slid through the frontstretch grass. The No. 9 team immediately began pulling out the backup car; he will start at the rear of the field for the first time in his NXS career, though he was officially credited with a 12th-place starting position.

The NXS will race the Kansas Lottery 300 this afternoon at 4 p.m. ET; it will be broadcast on NBCSN.

Wonderful…another Cup guy. Add to that I just turned on the race with 25 laps to go and see Kenseth and Busch up front. Not a mention of the Xfinity drivers. I just switched channels to NCIS which happens to be an episode that I have already seen. That should tell you what I think of the “Saturday Cup Show”.