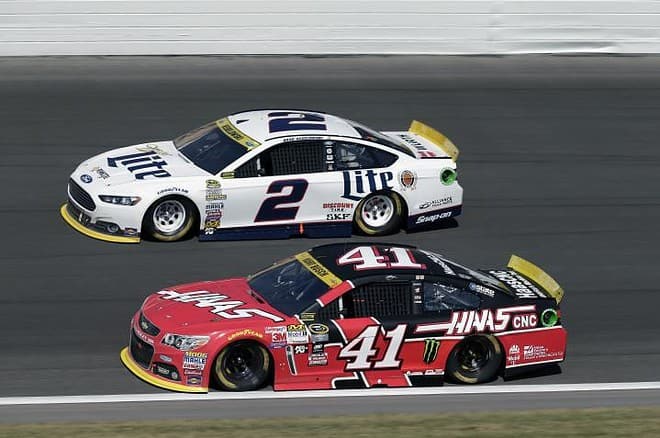 The drivers are at Kansas this week and it appears that much like last week the Penske team is at the top of their game. Kansas is another mile-and-a-half track, and the scheduled distance for Sundays race is 400 miles, so that means we’ll be looking to identify the lap leaders with maybe a little back to front guys if we can make them fit on the NASCAR Fantasy Live team.

The Penske drivers all looked fast, including the Wood brothers entry driven by Ryan Blaney. Brad Keselowski was exceptionally fast and also seems to be very happy with his car. The Joe Gibbs Racing guys seemed a to be next in line with speed with Matt Kenseth leading the way. Kevin Harvick did not show the dominating speed that he has for much of the season but it’s hard to count him out. So enough with the chit chat lets get to my picks for the week.

No. 22 Joey Logano $28.75
Joey Logano dominated Charlotte last week, and he appears to have that same kind of speed this week. I think that his teammate in the No. 2 car is slightly faster, but Logano is certainly a car to keep an eye on to win back-to-back. Logano will start 14th this week, and I like that starting spot as he should score some nice place-differential points.

No. 20 Matt Kenseth $27.25
Kenseth’s car looks to have good speed this week and he should be going all out for the win after hitting the wall at Charlotte. I think that the No. 20 car is the best of the JGR bunch and will start in the 11th position. It will be interesting to see if this team steps up to make up for last week, or if they roll the dice if it comes down to a fuel-mileage race. Its pretty much must-win at this point in time for Kenseth.

No. 2 Brad Keselowski $27.00
I’m going all in on the Penske team this week. Brad appears to have the best car through he first Saturday practice and will start on the pole. There is one catch with the Blue Deuce this week, and that is he wasn’t able to choose the number one pit stall that normally goes with having the pole. The team lost its pit-stall selection after too many written warnings were issue to them from NASCAR for failing technical inspection.

No. 33 Brian Scott $7.75
Brian Scott has what appears to be a relatively fast car this week. For a sub-$10 pick it doesn’t get much better than Scott this week. Brian will start the race in 16th spot and appears to have top-10 speed. I would like to see him start a little further back to gain some place-differential points, but at this price it’s hard to complain.

No. 40 Landon Cassill $7.50
As always with the back of the pack guys, we just hope that he stays out of any accidents and can move up through the field a little bit with the help of attrition. This week, perhaps Landon Cassill gets that kind of fortune.

Nathan became a fantasy fanatic after following NASCAR for 30 years. Nothing makes him happier than hearing that he helped people win their fantasy league. He grew up on the dirt tracks of western Pennsylvania, watching the likes of Lou, Dale, and Dave Blaney. Now a South Carolina transplant, you can find him in the infield of Darlington race weekends or crunching the numbers for your fantasy teams on Saturday.
Previous Regan Smith Will Not Return to JR Motorsports in 2016
Next Xfinity Series Breakdown: 2015 Kansas Lottery 300 at Kansas