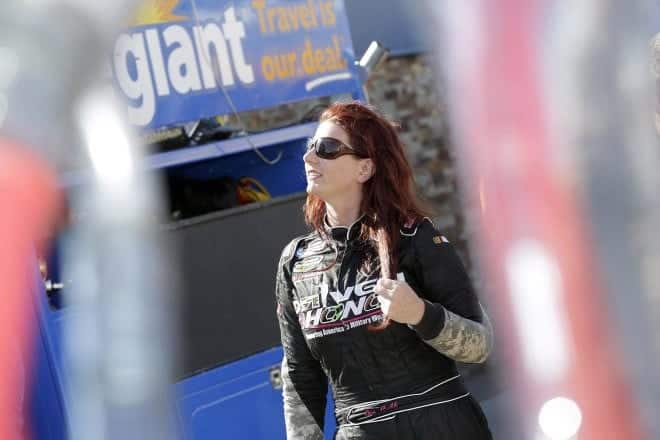 Just one week ago, Jennifer Jo Cobb was suited up in her wedding gown, saying ‘I do’ to engineer and crew chief Eddie Traconis in a wedding that was “too much money, too much time and too much stress for how quickly it was over.”

This week, she returned to her home track of Kansas Speedway to run the Kansas Lottery 300 Xfinity Series race Saturday afternoon.

With 41 cars on the initial entry list and a need to qualify for the race on speed, Cobb struggled with a loose car before it turned too tight late in practice on Friday in what she described as a “tense” afternoon. But come Saturday morning, she was all smiles on the way to qualifying.

Maybe she already knew that Mario Gosselin had withdrawn from the race, meaning she would make the field and get to race at her home track.

“It’s always very special to race back here, but it’s also 10 times more hectic,” Cobb said on her way to qualifying at Kansas Speedway Saturday afternoon. “We have three times the guests that we have anywhere else that we go and a lot of pressure because we want to do great for our hometown sponsors.

“We have five companies that support us pretty regularly – Mark One Electric, Arrow Truck Sales, Legacy Limo, a new one this year, Precision Roofing is back for their second year, and Pizza Shoppe has been wonderful to us. They give us money to suport the team and pizzas, which are delicious, and a venue for appearances. They’re pretty special to us as well.”

The weekend wasn’t without its struggles for Cobb, though. Running her truck engine inside the No. 10 car, she lacked the speed to keep up with the higher budget teams and posted a time in qualifying that was nearly two seconds slower than the polesitter. But despite those struggles, she doesn’t hesitate to smile when talking about her racecar.

“The car is better than I thought it would be; a little bit of a thrash getting it together. We don’t know anything about it. It’s a new car to us but it’s quite old; it’s an old DEI car, so you can go back how many years since DEI has had their own stable of cars and that’s how old it is. It drives really nice; we’re loose and our final run we were too tight.

“At least we headed the right direction, now we just have to back up a little bit. I feel like we’ll have a stronger run than I would have thought just for thrashing to get it together, trying to get married, trying to run the full truck season, trying to get this together. I pulled my crew chief away to come to the wedding, so I can’t wait to get a nap in after all of this is over.”

As Cobb walked to qualifying, she didn’t hesitate to stop and sign autographs for all of the fans standing along the fence, hopeful of just a few seconds with a driver they look up to.

“If it weren’t for them, we wouldn’t be here,” she said of the time she took for each fan. “I am so humbled by how many fans and social media followers we have; more than series champions do. It’s really my way of saying thank you to them for sure.”

Fast forward to the Kansas Lottery 300, and there still wasn’t much speed to be had for Cobb’s car. But despite having her truck engine in the car, Cobb and crew chief Steve Kuykendall worked on the handling throughout the race. It wasn’t meant to be, though, as a broken truck arm mount sent her into the wall before being clobbered by Korbin Forrister in his series debut. The damage proved terminal, and Cobb and the No. 10 team were forced to pack up and head home with a disappointing 29th-place finish.

Every NASCAR driver has a track that they call home, and Kansas Speedway is just that for Cobb. She came into the weekend not even sure if she was going to be able to race. And while it wasn’t the result the No. 10 team wanted out of the day, it was still home… and that’s something to be happy about.